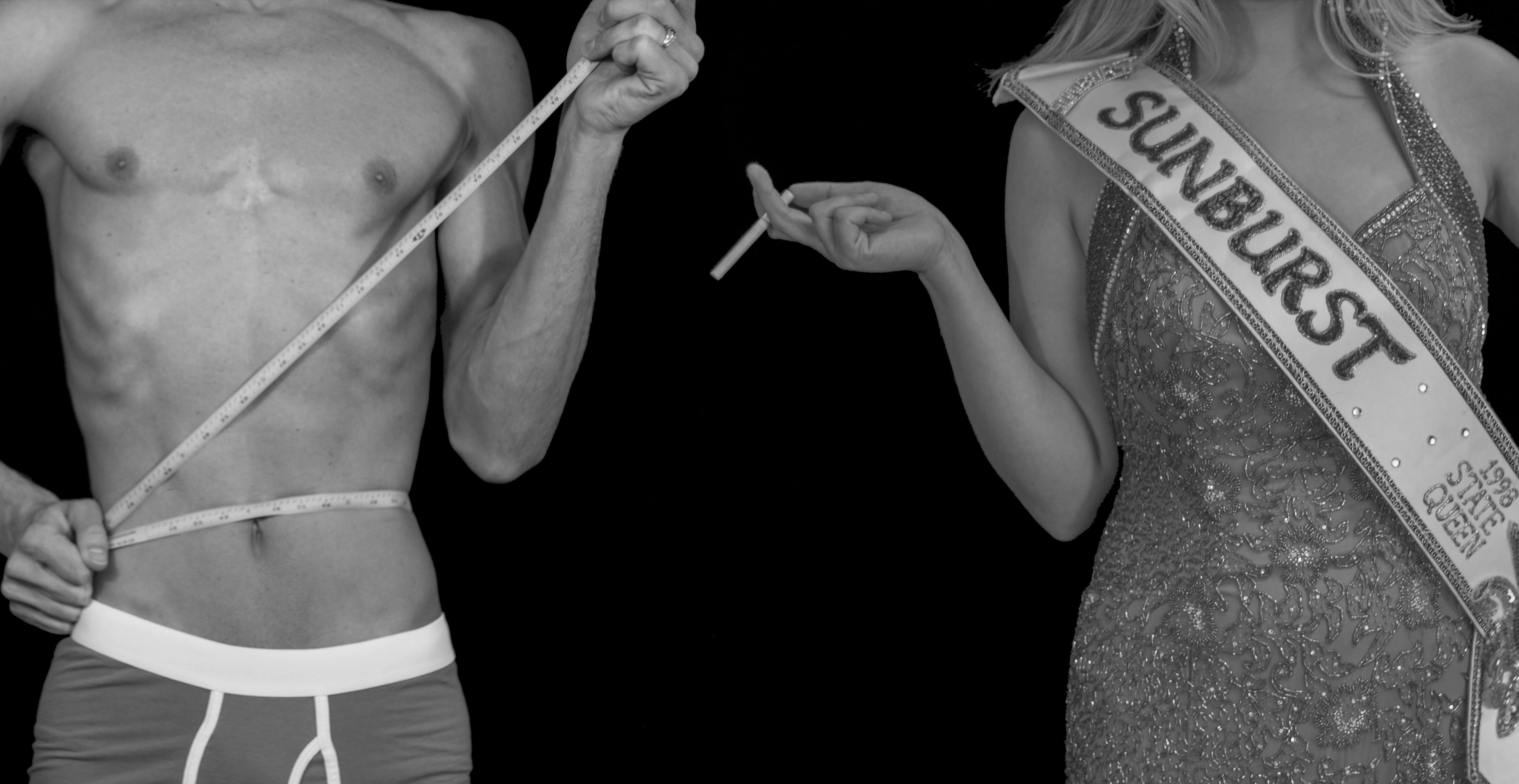 More than anything, I think I appreciated “Out of Disorder”’s sequencing. The show is actually a pairing of two solo shows: “Hunger Pains” by Christopher L. Moore and “I’m Different, Not Dumb” by Ali Clayton. Both are directed by Mary Rose O’Connor with an intelligent and economical hand. Moore’s show follows his struggles with eating disorders as a young man and is a fairly straight-up seriocomic autobiography. Clayton’s, on the other hand, draws from her own experience growing up with a rainbow of learning disabilities but it also incorporates a number of sketch characters whose relationship to Clayton’s struggles are thematic yet kind of tangential. (This is not a bad thing really, as the characters are all pretty funny—and the final one is downright hilarious.) “Hunger Pains” goes right for the jugular, while “I’m Different, Not Dumb” is concerned primarily with the funny bone. When I say I appreciate the sequencing, what I mean is that it works quite well to have “Hunger Pains” come in and rough the audience up a bit and then, for “I’m Different, Not Dumb,” to walk up and hand them a lollipop. O’Connor clearly understands the journey that an audience wants to be taking, and, for that, I am very appreciative.

“Hunger Pains” is a piece receiving its world premiere (“I’m Different, Not Dumb” is a remount) and there’s a rawness that occasionally drags it down. Moore’s story is certainly a harrowing one, following his initial bouts with anorexia and bulimia through his career as a professional model in Baltimore which, in case you were wondering, was not a career choice that lent itself to healthy eating habits. He mixes direct first-person past-tense narrative with character work, portraying a well-meaning if inept doctor and his psychotic modeling manager. He even stages a fake TED Talk that cuts right to the bone of the false utopianism that those speeches have in common with the body-dysmorphic mind.

A large talking point is the utter failure of the medical community at large to handle the case of a male with eating disorders. The show can be incredibly effecting, like when Moore recounts the story of his roommate in in-patient care dying of a heart attack and of his reaction being one of jealousy that she was able to get out. However, Moore occasionally undercuts himself as a performer. He has a Roadrunner-quick delivery that aims for chattiness but often just rushes through. He blows past a number of important moments, not giving the audience time for them to register. The subject is personal and it is painful, but its transmogrification into art necessitates that he stop, take a breath, and let these moments breathe as well.

“I’m Different, Not Dumb” on the other hand, leaves itself all the time in the world. Clayton is a talented comedic performer and knows very well the difference that a bit of well-placed air-time on a slow-building joke can make it land all the harder. The piece addresses her relationship with her eccentric Southern mother as well as her fabulous journey through the glamorous world of adolescent beauty pageants and her not-so-fabulous journey through the opposite-of-fabulous world of adolescent rehab programs. These autobiography portions consist of a slideshow, with Clayton’s droll voiceover providing accompaniment. (Cody Ryan’s projections do a wonderful job of capturing Clayton’s sunshiney sarcasm.)  These snippets surround a trio of characters who all embody some different aspect of Clayton’s experience, although it must be said that comedy often seems to win the day over thematic topicality.

She plays an alligator wrassler, a YouTube swim instructor, and what can only be described as the most modern danciest modern dancer in the history of existence. (There’s also a fourth character whom I won’t spoil.) These portions are the kind of thing that you and your viewing companions will be quoting to each other for days. Ultimately, the show’s outlook is right there in its title: it’s an affirmation of adversity and outsiderness that has a big heart but a quick wit too. (Alex Huntsberger)