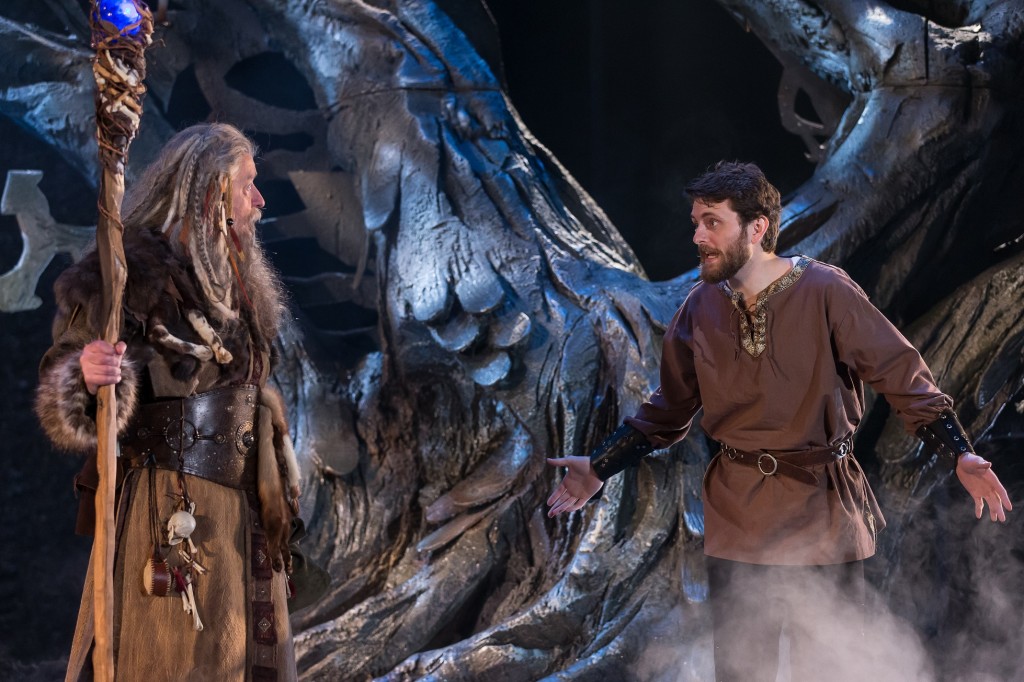 If you are a fan of the golden-age of musicals, if you haven’t been able to give up your LP of the original cast recording of “Camelot, ” with Julie Andrews’ soaring soprano seeming to possess no register changes and making every word clear as a bell while spinning silvery phrases, Robert Goulet’s burnished baritone ripping your heart out as the knight who couldn’t leave, and Richard Burton, speak-singing his way through the pivotal role with a purr, saving his full-throated magnificence for hurt and fear, and if you are willing to accept the challenges of over-long choral numbers telling stories of events happening off stage, and an awareness that some beloved music had to be cut after the show opened for the audience’s (and the player’s) bladders not to burst in exchange for simple joys, then director Alan Souza’s production at the Drury Lane Theatre will make you weep in the wrong way, and you should stay home, put on that old LP, and let Julie save you.

If, on the other hand, you are a fan of the re-imagining of golden musical stories and would enjoy an evening where pyrotechnics make you feel that you’re at the movies, there is virtually no actual “singing,” and everyone speaks on-the-vocal-chords in a “gritty” tone, causing accents and many words to be lost so that kings can sound like Marlboro-smoking, longtime-bourbon-drinking car mechanics; if you can handle the loss of the original lush orchestrations and layered choral moments in exchange for modal sounds and a simplified storyline (less confusion over the knights’ fickle loyalties, the principals responsible-rather-than-fated), comforted by the feeling that you are watching a movie where physically striking actors run about like gazelles (because that isn’t the point;  just Roku any of the recent films of Broadway musicals), unexpected to be able to sing, then make haste to see this real live movie.

Scenic director Kevin Depinet’s tree, taking up one-third of the set, is heart-breakingly beautiful as it changes for the season at hand, while appearing mechanical, as if it belongs in one of those movies with a title that is a number, and everyone’s appearance is digitally altered. Maggie Hoffman’s costumes are gorgeous, with the exception of Guinevere’s illogical outfits, borrowed from the rack of the concubines from “Kismet.” As the princess, Christy Altomare shouts to a pitch above which she should be transferring from chest voice to a head-mix, hoots for several pitches above that, and then her voice disappears altogether. Only Travis Taylor’s Lancelot is allowed to sing. He speaks the entire part, cutting off the end of every phrase to hide the vibrato that would undoubtedly make an appearance, until he delivers the final verse of “If Ever I Would Leave You” in lush, appropriately operatic voice.

Souza should probably have cut that. It only served to remind me what I had lost. (Aaron Hunt)