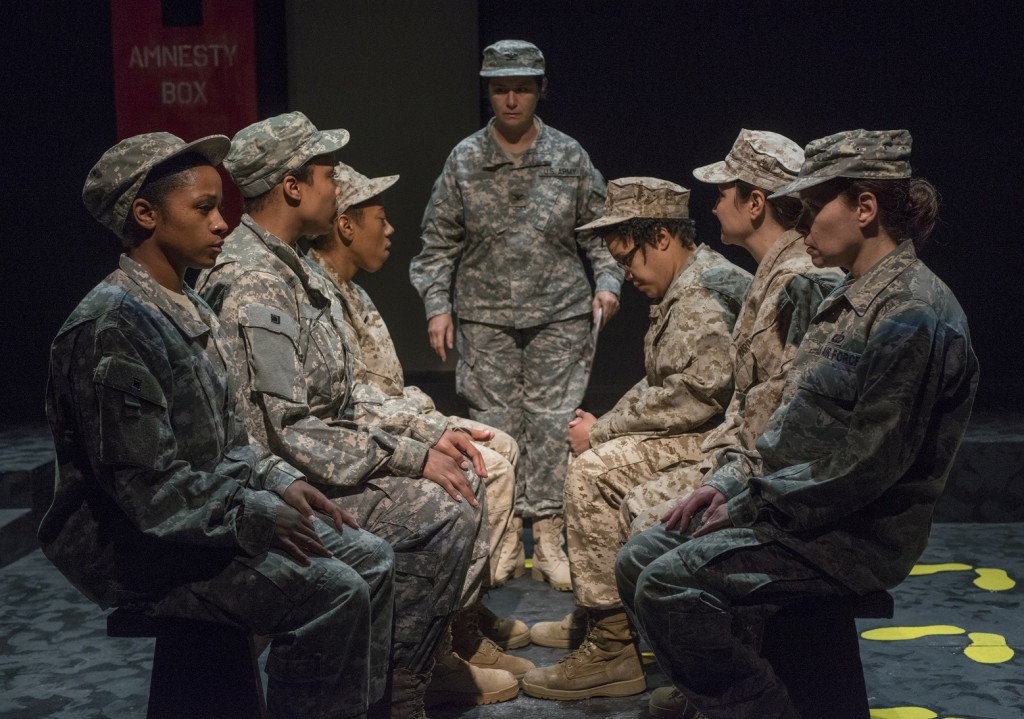 In a set of extremely brief vignettes, Rivendell Theatre Ensemble relates the experiences of American women in the armed forces through Megan Carney’s new play “Women At War.”  Based on the real experiences of women who have gone overseas and fought on behalf of our country, the play takes a rapid-fire and disjointed look at what it is to be a female soldier or sailor during the Iraq war era.

The play begins with a scene between a woman (played by Mary Cross) about to head out on her second deployment and her mother-in-law (Susan Gaspar) who is trying to understand the choices that her son’s wife is making (i.e. leaving her child behind to go to war). Gaspar’s character is an effective surrogate for those of us in the audience. We seek understanding.

As we follow a group of women on their military journey from boot camp to the Iraqi theatre to the post-military life and return back home, we witness a number of situations that each could be expanded into a play of its own.  Due to this broad overview, the show gives no part of the experience of being a woman in the military more than a cursory treatment.

The acting is all very authentic and each character rings true. But none of them are completely developed. We meet the women and learn about their stories, even about some of their strengths. What we do not learn is what makes them tick, what their individual challenges are and, most importantly, why we should care about them as characters.  While many of the segments of this play are interesting, none of them really stirs enough of an emotional connection with the characters for us to actually care about the story as a whole.

Director Tara Mallen’s staging is well-done and the images created on the stage are intriguing and engaging, but without the character development to match, it plays more like an interesting slide show than a compelling exploration of the topic at hand. (Christopher Kidder-Mostrom)