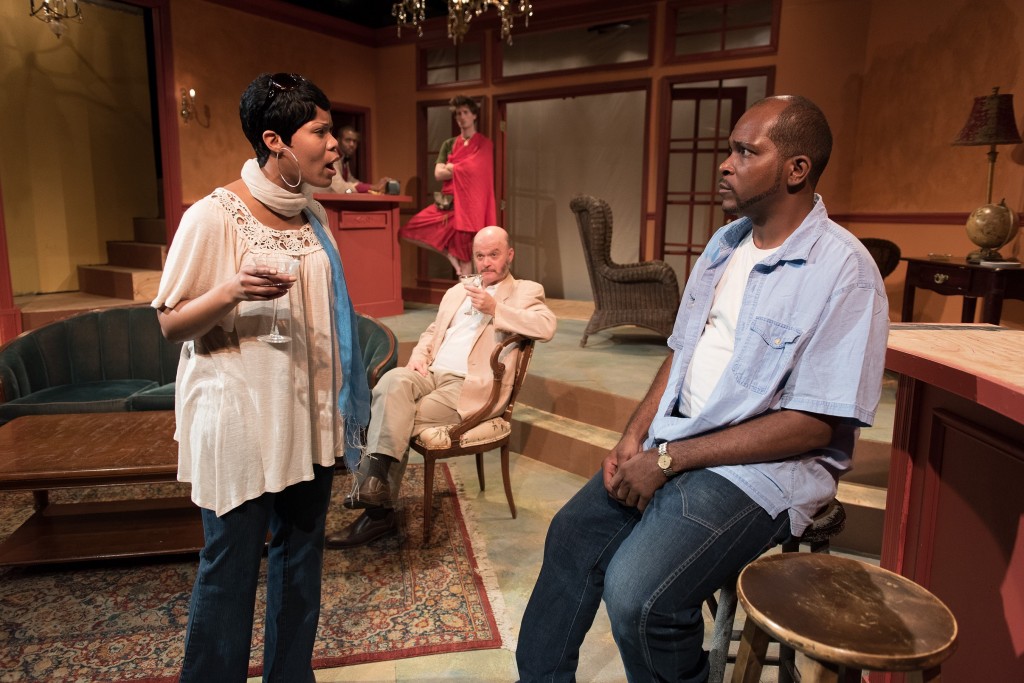 At the husband’s urging, a comfortably affluent couple (Robert Hardaway and AnJi White) decide to rough it a bit for their holiday, and travel off the beaten path to strive for more than just a good time in their time off.

Oh, the twist? You want to know the twist. Identity is the twist: the racial identity of the couple, and the identity of their destination. The couple’s African-American, and the destination is African. Where exactly in Africa we never learn, nor does the couple, at least not while we’re watching. It’s someplace on the precipice of danger and deprivation, that much becomes clear. The Americans’ ignorance on the basic count of their whereabouts is just the most glaring sign that their identification as even hyphenated Africans is up for debate. Indeed, the question of just who among the cast of characters—all holed up in a forgotten luxury hotel waiting out the rain—can rightfully claim to belong in this unnamed locale is central to Lynn Nottage’s script. Other questions of identity flutter around this central plot point. Is the husband (a writer on rap for white readers, further hammering home the topicality) a success in his wife’s eyes, or even his own eyes? Is the colonial old white male (Zach Bloomfield)—descendent of the hotel’s original owner—a horrible parasite or a rightful resident of the well-stocked bar? Is the laughable barefoot Belgium (Matt Thinnes) who’s forsaken European culture at least partially justified in calling a black man brother? Is the bellboy former solider (Anthony Conway) who holds the rest hostage beyond hope?

Hint: they’re all pretty much exactly who they seem to be. The characters are written as embodiments of various clichéd thoughts on Africa, or imperialism (or bickering spouses) as if to understandably discredit injustice and ignorance, and they work in that regard, however they yield no insight. Big notions come off as tired ideas. The familial tensions that motivate the American couple and even the concerns of the soldier all play as melodrama. The laughs, though coming from a live audience, land exactly where a sitcom laugh track would place them. The most telling laugh comes at the expense of the one character none of the others seem to like, a negotiator (Delia Baseman) they view more disparagingly than they view their captor.

There’s a trace of the absurd in some of the humor, and in the story’s setup, but the absurdity never cuts loose from the binding, lurching narrative. There’s a dismissal of realism where it facilitates the drama, lest you focus on the illogic in the action. The language, particularly that of the journalist husband, is unrealistically florid without being poetic.

A fine production can elevate an inessential script and Eclipse Theatre Company equips themselves admirably with a stunning set and a very effective cast. While the play sadly manages to be didactic without being illuminating, Nottage does pull some strings over the two hours to make you care enough about the characters. The most sympathetic and likable among them, Ama (Elana Elyce) is the one participant who’s not trying to convince anyone, not even herself, of the validity of her identity. (Raymond Rehayem)