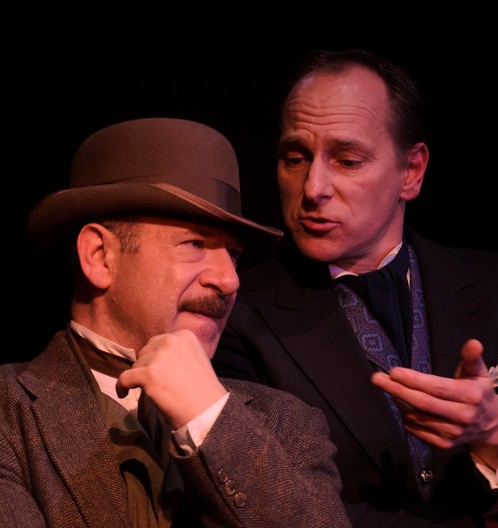 At the heart of City Lit’s “Holmes and Watson” is the co-dependent relationship between the two titular characters. Holmes, to put it bluntly, can be a bit pedantic and his obsessive attention to detail can be downright grating. It is little wonder that he forever remains a bachelor. The fawning Watson, however, does not seem to mind and is content to live vicariously through the master detective’s daring exploits, hanging on his every word. Holmes clearly relishes lecturing to his doctor friend and may at times be even a little jealous of the attention given to Mrs. Watson. It is almost as if Holmes senses that he does not fully exist without Watson.

Under Terry McCabe’s direction, the two partners weave their way in two acts through two of Arthur Conan Doyle’s most famous stories (“A Scandal in Bohemia” and “The Final Problem”). McCabe (who also originally adapted this work for City Lit in 2006) demonstrates a solid understanding of both the characters and the plot twists, presenting both with clarity and flair. In the first act, the buffoonish King of Bohemia (played amusingly by Adam Bitterman, who is also quite convincing as Watson) enlists Holmes in order to snag an embarrassing photo held by his former lover, Irene (the very charismatic Adrienne Matzen). The smug Holmes (played very well by British actor James Sparling) sets up a very elaborate plan to trick Irene into showing him where the photo is hidden. Irene, however, has a few tricks of her own and in the end a smitten Sherlock is left to wonder what might have been.

The second act is decidedly darker. Initially narrated by Watson as a response to an editorial attacking his deceased friend’s reputation (Doyle, tired of Holmes in 1893, decided to kill him off; the death did not take), “The Final Problem” involves a very paranoid and strung-out Holmes facing off against one Professor Moriarty (described by the ever-humble Holmes as a villain whose intelligence is a match to his own).  Nuanced and mostly understated as Holmes, Sparling puts in a delightfully evil and menacing performance as the weasel-like professor. One can believe Holmes when he states that he would gladly trade his own life if it meant ridding the world of such an evil. The gravity of such a sacrifice is showcased well in Watson’s almost palpable grief over losing such a dear friend.

Considering all the recent bastardizations of the Sherlock Holmes franchise, it is refreshing to see a modern adaptation of this legendary work that does not involve a shirtless Robert Downey Jr.  It is also to McCabe’s credit that he consistently chooses a dignified and respectful approach to the work over lighthearted farce. The choices pay off and in the end “Holmes and Watson” shines in its ability to put on stage something both new and familiar. (Noel Schecter)