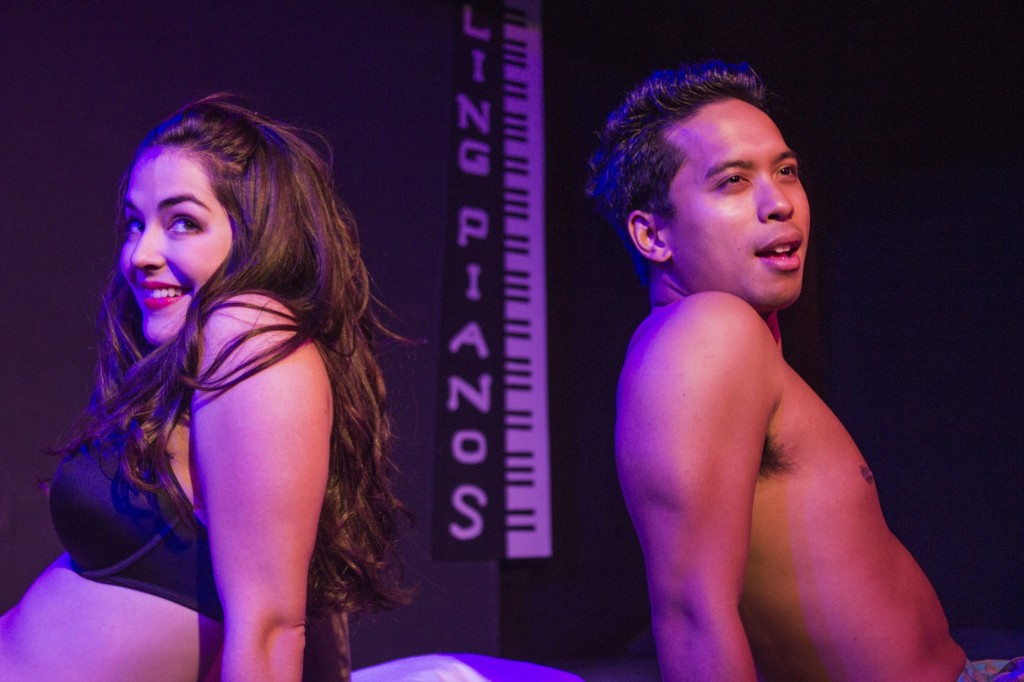 Wouldn’t it be great if there were a book that provided all the dos and don’ts to loving the single life? Wouldn’t it be nice to have a book about dating that everyone could read so there would be no harm to anyone’s emotions because everyone knows the rules and plays by them? Wouldn’t that be fantastic? Maybe. Unless, those darn things called “feelings” got in the way. “The Guide to Being Single,” a new musical by Kaitlin Gilgenbach (book) and Alexi Kovin (music and lyrics), aims to ask and answer those exact questions.

The show is set in Wrigleyville, one of Chicago’s most bar-lined neighborhoods. Six friends Jackie (Sarah Danielle Hoch), Heather (Miki Byrne), Zack (Jonas Davidow), Derek (Jomar Ferreras), Liza (Kelsey Burd) and Stacy (Juanita Andersen) have all discovered a new book promising that, by following the simple rules given, singles can enjoy “screwing without getting screwed.” Rounding out the cast is Chad Michael Innis who plays a bartender, cab driver and bar goer, among other roles.

The book warns that the rules don’t apply to anyone looking for or already in a serious relationship. It also has no answer for what a single guy or gal should do when emotions get mixed up with a one-night-stand, short of move on to the next conquest. Throughout the musical, the rules given in “The Guide…” are presented. While many of them seem jumbled or out of order in their placement, that also speaks to the nature of relationship rules—they don’t really exist and people often make them up as they go. The show is also a bit risqué from time to time (with characters appearing in their underwear during a few scenes).

That being said, the actors are fun to watch. Though some moments are clearly over-acted for comedic purposes, the cast does their part to move the story along. Hoch, well-cast as the lead here, has an especially vibrant stage presence and a lovely voice that makes each of her scenes enjoyable. With signs from Wrigleyville bars hung and painted around the set (designed by Ryan Emens) the audience is instantly placed on Clark Street. The live band is superb, with an overture brass section that makes one reminisce of early spring at a Cubs game. Catchy, original musical numbers like “Another Morning,” “Of All the Stars in the Sky” and “One More Rule” performed by the peppy cast make the nearly two-hour show feel like it’s over in far less time.

Many great musicals have tried to tackle the idea of love and what literally makes people sing about it and many love stories have been far more complicated than the ones presented here. This is a world premiere, and like the North Side baseball team it references time and again, it has a few kinks to work out. But it’s also fresh and uniquely modern, presenting an interesting playbook that makes it appealing for rules to be broken. (Mary Kroeck)