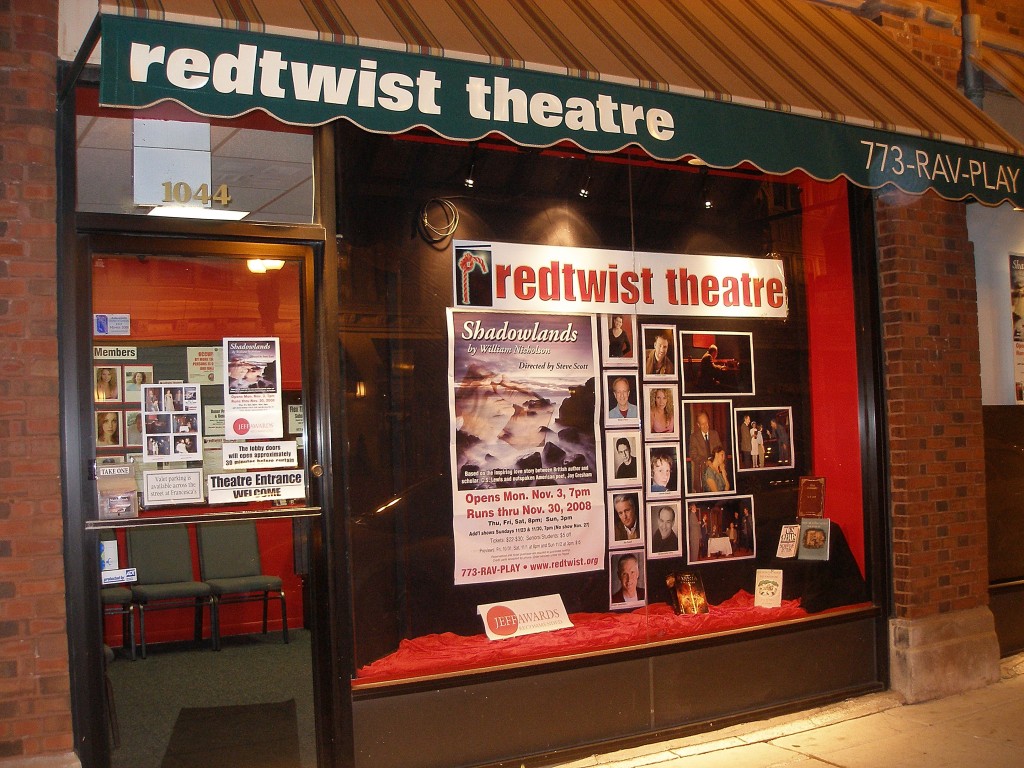 With thirty-six Joseph Jefferson nominations and nine wins since Redtwist Theatre’s first show in the Edgewater neighborhood opened in September 2003, it might seem that the company didn’t spend much Cinderella-time by the fireplace. But none of Chicago’s storefront theaters skate through more than ten years without some bumps along the way and this season Redtwist celebrates the anniversary of their residency at 1044 West Bryn Mawr with an eleventh season entitled “Rising From the Ashes.”

I spoke with Redtwist’s artistic director Michael Colucci and original member Johnny Garcia about the company’s journey and the alchemy that has given the company its status and resiliency. Colucci was transplanted from New Jersey to Chicago in 1981. “It was because of a corporate job change,” he says. “The company shipped my boss [here]…and he said, why don’t you come with me? There’s an opening in Chicago.” He smiles. “I thought it was a great opportunity.”

Colucci arrived at the beginning of Chicago’s storefront theater boom. Body Politic, Wisdom Bridge, Victory Gardens and other financially strapped, artistically rich organizations re-envisioned street-level real estate no longer fiscally viable for traditional business into storytelling spaces. Rent was cheap, and small but ardent collectives of newly graduated artists bursting out of Chicago’s universities remodeled these “homes” for theatrical expression.  Colucci found himself swept into this tidal wave. He studied acting, left his corporate job when his acting career gained momentum, then added coaching and stage direction to his portfolio. His studio became the Actors Workshop Theatre, and then morphed into Redtwist. The company moved into Edgewater in 2002.

Formerly an office space in a double-storefront, the conversion to a theater with a proper lobby, classroom and comfortable performance space that kept the audience in such close proximity that intellectual and emotional buy-in was part-and-parcel of the experience, had to be undertaken. 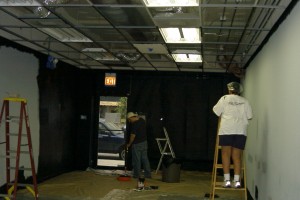 The early days of Redtwist Theatre

This is where managing director Jan Ellen Graves moves center stage. Graves and Colucci are married, partners in every sense, theatrical ying-and-yang. “Jan was the boss lady. She did it,” Garcia reveals. “She’s like an octopus, eight arms, because she can do anything and everything at once.” Colucci adds, “This wouldn’t be here without her. She’s a force of nature.  We were sitting dormant for the better part of a year. And I was paying rent, and I said, ‘Jan, when do you want to do our first show?’” The boys cleaned the toilets, took out the garbage, and did as they were told, and Jan took up the hammer and buzz-saw. It took them a year to remodel the space.

Colucci talks about the struggle at the beginning. One “flop” might not have finished them, but two certainly would have. Redtwist was lucky to break out early with a stellar production of “Equus” that brought them to the attention of important directors and playwrights in the city. But it was their production of “The Pillowman” in the 2009/2010 season that assured their position as real players in the market, with the ability to attract top directors and have access to new plays to premiere.

Garcia explains, “We get together and read plays, but Michael is the mastermind behind it, so he’s putting the puzzle together.” I have long admired what seemed to me to be a theme-based season at Redtwist. Colucci surprises me when I ask about this: “Themes? We don’t have a formula. We read and read…and then we come upon something that we really want to produce first in any season, [and] we are happy to experience that moment when we say, ‘We have to do this play.’  What we typically do, is we have two anchor plays…old chestnuts…two Chicago premieres, and one world premiere.

“Another Bone” began the season, achieving a Jeff-recommendation. “I and You,” a Chicago premiere by playwright Lauren Gunderson, promises to be both funny and poignant, as two very different people find each other, and work toward a successful connection. Beginning with two premieres, the tense and terse “Red” follows. John Logan’s play is well-known, and will be directed by legendary Chicago director Steve Scott. As a seasonal anchor, this is a vibrant choice. Then comes Arthur Miller’s “American Clock,” directed by Graves. The play was an instant hit for Redtwist in 2005; the theater’s loyal audience is likely to flock back to see this favorite, anchor number two.  The final piece in the season is yet to be chosen. So Colucci has his two anchors, two premieres, and now can look for that play that “must be done.”

This season, each play is driven by a volatile relationship. And Redtwist’s space allows audiences to experience these performances virtually in their laps, so close to them that they aren’t separate, but are in the play, in the kitchen, eavesdropping in the studio or bedroom.