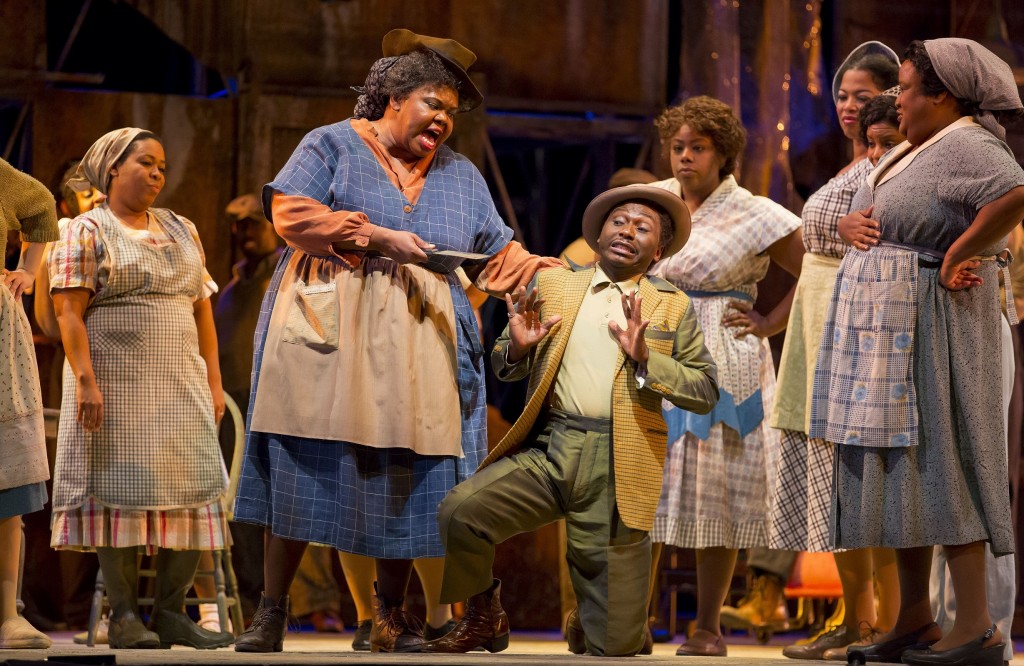 From the orchestral bubbles at the top of the show—piccolos piping and xylophones pounding—there can be no doubt that you’re in for an evening of Gershwin. The brothers George and Ira found inspiration in DuBose Heyward’s novel “Porgy, ” and the music-half of the team had his chance to prove himself to the classical music world as a “real” composer. The lush melodies and deeply human lyrics of the songs, I mean arias, are exactly what one would expect to hear, if rangier, and requiring substantial vocal training. But the jagged recitatives in between, while proving George’s understanding of the classical oeuvre of his time, rest uneasily in the score.

Lyric Opera of Chicago’s current production corrects this seeming unbalance with the imperative of theatrical connection to the text. With the “lines” between “numbers” half sung/half spoken, the words ring true, matching the lyrics, and the pitches ring on the ear as naturalistic. In keeping with this focus, the commitment to the marvelous characterizations is gut-deep, and wrenching. Director Francesca Zambello must be held responsible for this magic, along with a cast of fine professionals who both look as we might expect to see these characters, and attach to them and to each other like glue.

Adina Aaron’s Bess is a concoction mixed of beauty and confusion. Her Bess isn’t played as unbalanced (as is often the case), but as desperately searching for an anchor, while self-knowledgeable enough to understand that she can’t fully accept unconditional love. Aaron can sing lyrically like a Mimi, float the type of pianissimo one would expect to hear from an Aida, and turn on the dramatic fire of a Tosca. Her lovely figure and beautiful face make it easy to believe that her Bess could be perpetually objectified.

As Porgy, bass-baritone Eric Owens fills the house as he breaks hearts. To sing at Lyric and be heard, there must be a point to the voice; a dark beauty can be added afterwards. As a returning singer to Lyric, Owens knows this, and conquers the house. His portrayal of the crippled Porgy is true from his entrance with his crutch, through the happy songs and the flowing duet, “Bess, You Is My Woman Now,” to his exit as he leaves for New York to search for an absconded Bess, his face as open and honest as Porgy’s heart.

Eric Greene’s Crown is wonderfully wild and narcissistic, with a voice and body to match. Jermaine Smith’s Sportin’ Life is manically self-serving; Smith creates the character anew, moving beautifully, his deviations from the score excusable in light of his achievement. Contralto Gwendolyn Brown grew up in the Lyric chorus, and her Maria was always heard; she also knows the house. Karen Slack (Serena) and Norman Garrett (Jake) just keep bringing the voice and the feelings. (Aaron Hunt)