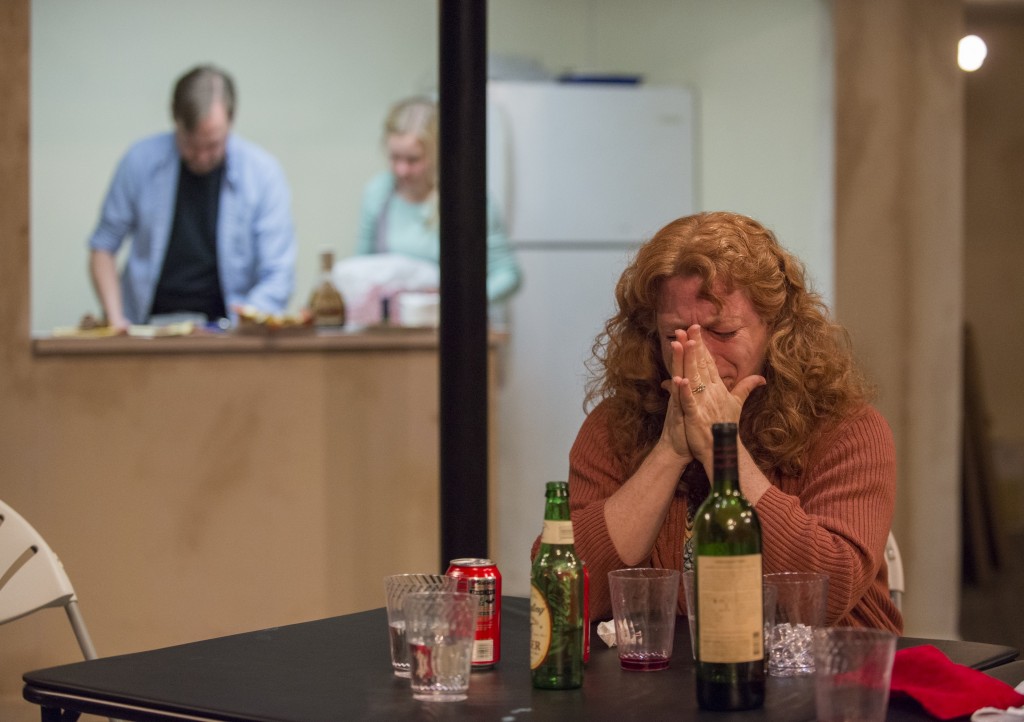 The specter of loss hangs like a literal specter, a ghost, over Stephen Karam’s new play “The Humans,” currently receiving its world premiere at American Theater Company. The loss of money, of security, of mothers and daughters and those we hold closest to us, of their respect and their love. Karam conjures up these fears and then sends them skittering off into dusty crevices where they become suspicious knocking sounds and burnt out light bulbs and darkened rooms and the ominous whirring of unseen machinery. 9/11 is present too, the latest loss of innocence for the nation itself. The inconceivable terror of a world that comes crashing down in fire, rubble and ash touches the play’s characters more closely than is first apparent. Karam has drawn up a world much like our own, where everything we know can be gone in a second.

The play itself concerns a single family, the Blakes. The parents, Eric (Keith Kupferer) and Deirdre (Hanna Dworkin), are blue-collar Catholic folk from Scranton, the kind that have purchased land for a lake house but have done so as a two-income household and with a fair amount of belt-tightening. They have come down to the wilds of Chinatown in New York City to spend Thanksgiving in the new apartment of their youngest daughter Brigid (Kelly O’Sullivan) and her much older boyfriend Richard (Lance Baker). Their other daughter, Aimee (Sadieh Rifai), is also there. She’s a lawyer from Philly with a failing intestinal tract and a recent separation from her longtime girlfriend. And Eric’s mother, who everyone calls Momo (Jean Moran), is also physically present, although her mind has long been lost to the ravages of dementia.

The plot is pretty standard stuff. The parents are distrustful of their daughter’s new boyfriend, not to mention the fact that their new neighborhood is a little too near certain terrorist-attracting landmarks for comfort. Meanwhile, Brigid is struggling to find work as a composer, which puts even further strain on her parental relations. Eric has been losing sleep, for reasons that are clearly being kept secret only so that they may be revealed later, and Deirdre keeps having sudden jags of weeping when no one else is around. Aimee is dealing with the traumatic dissolution of her relationship which is only compounded by her medical troubles. And Richard has, well, not so many problems as everyone else, which of course brings him into conflict with Eric when it’s revealed just why that is. Momo is probably the least troubled of the bunch, except when her dementia acts up and she becomes violent. It is a group of people, all with secrets, slowly orbiting each other in tighter and tighter revolutions until finally they crash into each other and explode. American Family Drama 101.

Where Karam separates himself is in the margins that surround the meaty All-American whole. The play is not what one would call a ghost story—it sure as heck ain’t “Blithe Spirit”—but it plunders those familiar tropes for thematic treasure. Eric’s dreams are haunted by a faceless woman, and Brigid’s apartment is beset by an increasingly poltergeisty sense of weirdness. There is the aforementioned weird knockings, and the lights keep burning out, and it feels like there is a force trying to shout something out from the realm of ether. The force in this case is most likely Karam himself, bringing the characters’ physical world to life in order to ram home their inner lives. Whatever it is, it works.

Karam also continues to explore the theme of bodily decay. It was very present in his play “Sons of the Prophet” which ATC produced last season. Karam’s characters are ones whose bodies are constantly betraying them, be it from age or disease or general poor upkeep. Karam juxtaposes this with the quest for spiritual wellbeing—the Virgin Mary makes an appearance here, as do vaguely spiritualistic emails and forthrightly religious Irish folk songs.

ATC’s production, directed by artistic director PJ Paparelli, is spot on. Kupferer and Dworkin evoke an entire shared history with nothing but a few glances and eye-rolls. In fact, the entire cast brings the kind of lived-in familiarity bordering on outright hostility that only family members can achieve. Dworkin especially (though credit goes to Karam too) nails the excruciatingly awkward humor of a woman who is kind but neurotic and far too well-intentioned to ever be genuinely funny. O’Sullivan and Rifai are both wonderful as strong, modern adult women who nonetheless are brought awfully low by the pressures and responsibilities of being strong, modern adult women. Baker plays nicely against type as perhaps the most well-adjusted character in the play. He is the necessary and welcome base to everyone else’s Irish Catholic acid. And the highest compliment I can pay to Moran’s performance is that when she walked onstage to bow at the evening’s end it was genuinely shocking to remember that she had been acting, and wasn’t just an actual person suffering from dementia.

The title of the play comes from a story that Baker tells, wherein a group of monsters on a distant planet all tell horror stories to each other in which humans (cue “Twilight Zone” theme) play the role of their bogeymen. It’s a little on the nose, I have to say, as are a number of moments in the show—for instance, the origin of the faceless woman. However the play is adventurous enough that I don’t mind a couple signposts along the journey. For a show that at one point literally plunges its characters and audience into darkness, it’s alright to have some moments that point the way. (Alex Huntsberger)