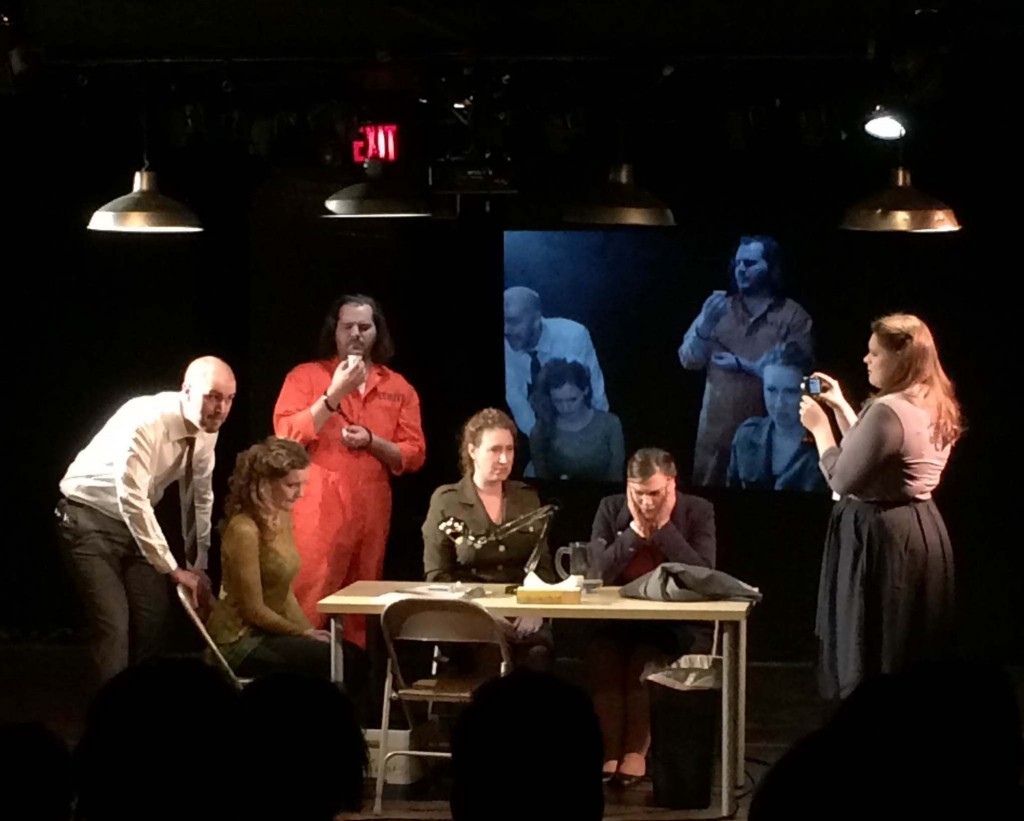 If you are a newcomer to Benjamin Britten’s masterpiece “The Rape of Lucretia, ” and aren’t familiar with the semi-legend told by Roman writers and remembered in paintings of naked, Rubenesque ladies fighting off swarthy, leering soldiers, make sure you attend Chicago Fringe Opera’s contemporary re-envisioning. If you know and love the opera as given traditionally, swallow hard twice, open your mind, and go anyway.

With a mission statement that calls for productions of American and English vocal works revisited and refurbished, CFO opens a neon door for a generation that grew up on television’s “CSI” and “NCIS” to pass through and connect to the material. Their first outing proves their ability to make good on their promise, and to attract a new audience to an operatic production which doesn’t feel remote to them. The night I saw the show the seats were packed with a youthful gathering that held their breath throughout, and then applauded and yelled during the curtain call like they were at a football game.

Director George Cederquist’s visitation of the piece calls for the solo Male and Female chorus, customarily serving as narrators, to play investigators into the rape, after the fact. Scenes usually played as immediate are made to be re-enactments at the direction of the detectives. Tarquinius is in handcuffs and an orange jump-suit, detained for questioning, and Lucretia appears in uniform, another victimized woman in the military crying out for justice. History repeats when the investigative team leaves the prince-suspect and the chaste wife in an interrogation room in hopes that an increase in tension will lead to confessions.

Britten is no easy task, but pays back in spades. The trick is in the approach to the score. The music, while twentieth century in compositional structure and harmonic footing, reveals unexpectedly breathtaking melodies when they are elucidated in a clean delivery of the text. There is no aria/recitative-variable in Britten’s music; it’s all talking, that sometimes grows into something singular. The moment a singer decides it’s time to “sing,” they will muddy Britten’s harp-delicate vocal lines. Peter Pears, Britten’s life-partner and the tenor for whom he wrote much of his music, possessed an instrument that, while thin, was capable of terrific diction. His elevated musicality gifted him an ability to speak the text perfectly on pitch, leaving the vowels and the consonants untroubled by undue vibration, and then grow the sound into vibrato if the note was sustained.

CFO’s singers are most effective when they follow the Pears formula. Scott Brunscheen’s (Male Chorus) slender tone is exactly right, with every phrase begun as a thought that grows in elasticity; even in his upper voice he is always understandable. Soprano Jenny Schuler (Female Chorus) deserves praise for her handling of a role written for mezzo-soprano; Schuler metes out her sparkling instrument with great intelligence, mostly hiding the fact that she is singing outside her ilk. Matthan Black gives us an appropriately petulant, narcissistic prince, and in “Lucretia’s” most easily excerpted segment, “Within this frail crucible of light,” he approaches gingerly, talking and musing until just the right moment when the words need to grow to match the emotional pitch, and he can let fly his bright, flexible baritone. In the final scene on opening night, Robin Bradley (Lucretia) and David Govertsen (Collatinus) exhibited perfect Britten-styling; they could have “sung” it, but instead they “spoke” to each other, rewarding themselves and us with a living, theatrical moment, and revealing Britten’s matching, mystical lyricism.  (Aaron Hunt)