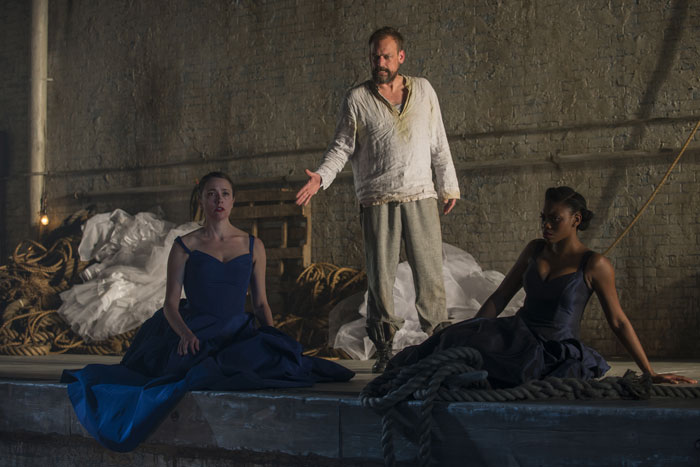 Watching a Greek drama is odd, because your moral compass gets completely rewritten. There’s a moment in Nicholas Rudall’s new translation of Euripides’ “Iphigenia in Aulis” when Clytemnestra says to her husband Agamemnon something along the lines of “Remember when you met me and murdered my (first) husband and killed my two sons in front of me?” Clytemnestra then goes on to point out how she eventually got over that and forgave him and became his loving wife and bore a gaggle of beautiful children, one of which (the titular Iphigenia) Agamemnon is going to sacrifice to the gods so that he and the rest of the Grecians can go fight a war. It struck me as I was listening to these words that I am watching a play in which a man murdered his wife’s first husband and her children and then married her and yet… that fact is incidental to the action currently at hand. It’s barely relevant. A footnote.

I repeat, he murdered her husband and both of her sons in front of her and the entire reason she brings it up is to point out how she totes got over it.

If I saw a modern-day play wherein someone dropped that little tidbit in the middle of an argument, it would stop the play dead in its tracks. There is no possible way that the play could be about anything other than that. It would be “the big secret” that gets revealed halfway through Act 2. Or maybe the play would be a marriage that pulls double duty as a prolonged case of Stockholm Syndrome. Either way, Agamemnon’s act would not be treated as incidental. It would be very, very integral.

And yet, in a Greek drama, terrible acts of violence are just lying about the place, like used towels in a gentleman’s spa. Their world is a much crueler one than ours, populated by psychopathic gods with kindergarten-level impulse control. It isn’t a world of people, per se. It’s a world of myths. These are stories that are told because they mean something. They tell an important lesson, or they explain how something came to be. They are about big important nouns with the first letters capitalized: Truth, Justice, Power, Death and Revenge. The characters are not people so much as they are highly advanced cave paintings, the figures in a mosaic painted two stories tall on the side of a great temple.

And honestly, they are rather hard to relate too. I don’t know about the rest of you, but I have never been told by an oracle that I had to murder my daughter so that I (and the rest of my friends) could sail across the ocean to fight a war because some guy took a bribe from a goddess so that she could win a beauty contest and in turn helped this guy run away with my brother’s wife. That isn’t really a part of what we call “the modern condition.” 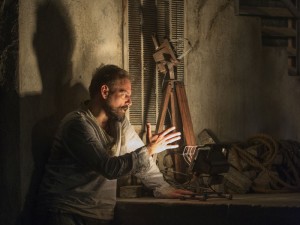 It’s probably why a lot of people hear that someone’s doing a Greek tragedy and react like it’s the theatrical equivalent of broccoli: something you ingest because it’s good for you, even though you don’t enjoy it. And that is the great triumph of Court Theatre’s production of Rudall’s text. Under the confident, playful hand of artistic director Charles Newell, it doesn’t feel important for the sake of important. It doesn’t feel reverent or conservative or safe. It feels savage and raw and horrific. It feels like people trying to live kind lives in a cruel world and failing tragically.

The set, by Scott Davis, is that of a colossal, crumbling loading dock. Massive coils of rope are strewn everywhere. They feel like they could come alive at any moment and wrap themselves around the characters, tangling them, strangling them, dragging them down toward hell (or Hades I guess). I was reminded of three fates, a trio of goddesses in the Greek canon who sat at a loom and spun out the threads of destiny, simple strands that determined the birth, life and death of every living person on earth. It’s fitting that these threads would pile up around the poor doomed Iphigenia, done in by powers far beyond her or her mother’s—or even her father’s—control.

Agamemnon is played by Mark L. Montgomery as an anguished father. Rudall’s text is rough and down-to-earth. Montgomery is a man facing a series of unimaginable tasks and he seems like it. He alternates between blind fury and a kind of fugue state. Sandra Marquez’s Clytemnestra on the other hand has no use for fugues. She enters as a woman overjoyed to celebrate her daughter’s wedding to the noble dreamboat Achilles (Jordan Brown) which curdles into horror and rage when she learns the truth of why her husband has summoned them. Watching the two of them together, they are flesh-and-blood humans wrestling not just with fate but with each other. It is a supreme accomplishment that at times it seems like Clytemnestra might actually prevail. For a story whose outcome is famously predetermined, there is a faintest flicker of hope that, when it is eventually extinguished, only deepens the darkness left in its wake.

Stephanie Andrea Barron makes a shimmering and effervescent Iphigenia. One can imagine that perhaps if she were less accustomed to making the best of any situation, she might have figured out a way to escape her inevitable death. Iphigenia’s change of heart—she comes to believe that her sacrifice will also, ironically, grant her lasting immortality in the hearts and minds of future generations—is not an easy thing to pull off. Newell wisely adds in a moment of hesitation right before she departs to the altar, a moment where the full weight of what is about to happen comes crashing down upon her. Barron plays the moment beautifully, reminding us all that, after all, she is only, nay, crucially, human—fragile and impermanent and frightened, both of and to death.

Newell also makes fine use of the chorus. They are done up in costumes by Jacqueline Firkins that suggest Iphigenia’s bridal party. They are an audience at first, eager for the wedding, hoping for a glimpse of the brave and beautiful Achilles. Once the scales fall from their eyes, they become something more. They are advocates for the women, friends to comfort them. They echo thoughts and offer suggestions. They express horror at what they see but are powerless to stop it. They are both inside the story and outside the action. They are women watching women be destroyed by the hands of men and gods and they let us know how they feel about that. They made me wish that the chorus would come back in style.

This production is the first by Rudall and Newell of what is going to be a kind of Frankenstein trilogy. It will continue next season with Aeschylus’ “Agamemnon” and conclude the season after that with Sophocles’ “Electra.” It will follow a line of death and counter death, from Iphigenia to Agamemnon to Clytemnestra and Rudall and Newell intend for the trail of bodies to be clearly marked.

As such, “Iphigenia in Aulis” does not offer an ending so much as a pause in the action. (That pause by the way is called “The Trojan War.” Even the “Yada Yada Yada” bits are soaked in blood.) Clytemnestra turns to face Agamemnon, she with her baby Orestes in her arms and he with hands covered in his daughter’s blood. Her visage has hardened and the look in her eyes would make the Medusa avert its gaze. If looks could kill, this one would slaughter. It is clear that this time around Agamemnon’s murder of Clytemnestra’s child will not go unpunished. (Alex Huntsberger)