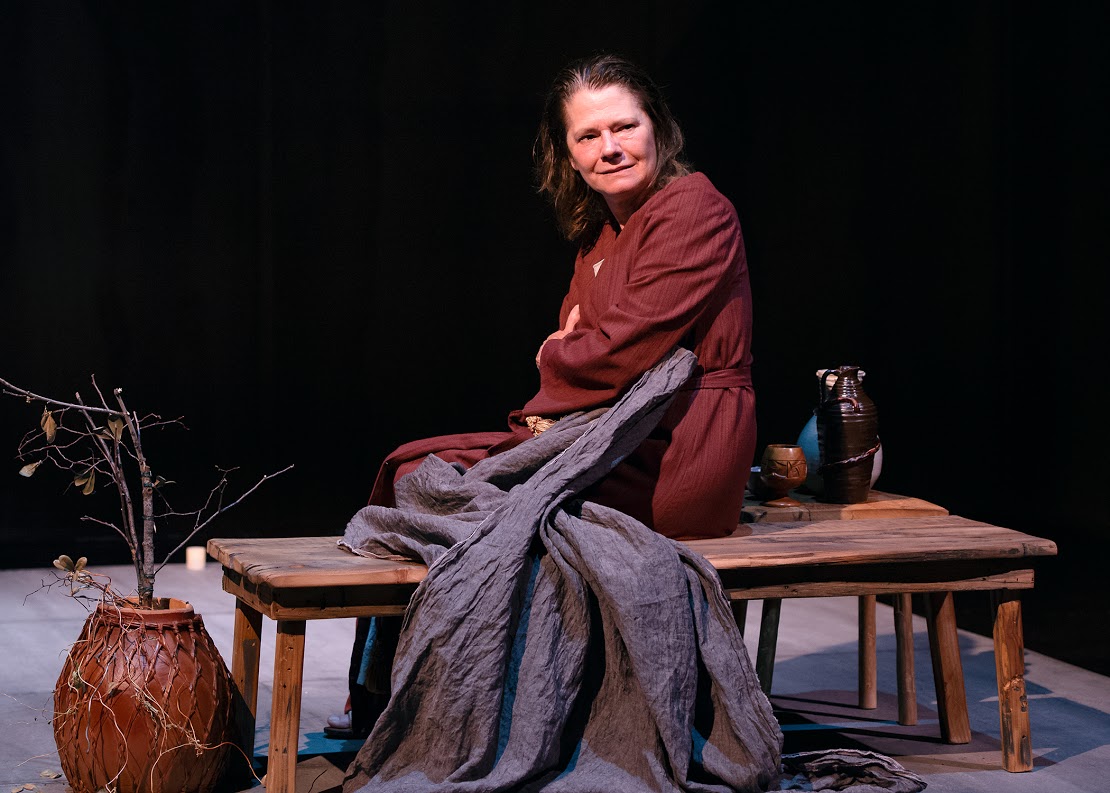 I love Jesus. Could even say I’ve got a complex. Can’t really blame my Catholic school, they didn’t teach a damn thing about the scriptures. And admittedly a harsh history of my attractions may reveal a Mary Magdalene fixation. But I’ve never been much for the other, mother Mary. As undeniably as the various takes on Jesus are up to interpretation, Mary seems a pure white screen upon which believers project. The Mary that materializes in this one-woman show is intellectually defiant, emotionally devastated and remarkably well spoken for a peasant woman. She’s a full character with a historical chip on her shoulder. She’s a mother, not an icon, even if she is doomed to become the latter.

I’m a skeptic of religion and of theater, which may cast my credentials as an admirer of the Christ and a commentator on the stage in a suspicious light. So, crucify me. This show clearly casts doubt upon the supernatural aspects of the Christian faith, but it doesn’t quite make me believe in the need for its staging either. This play is based on a book—not the “good” book—but a novella by Colm Tóibín.  I left with doubts in the mission of adapting this book into a performance. Despite the unflinchingly gutsy performance by Linda Reiter and the tasteful and expressive set and projection design by Christopher Ash, I suspect everything Tóibín has to offer could be gleaned from reading this on the page.

This Mary is the house prisoner of unseen scheming evangelists, who put the machinations of myth-building ahead of human needs. Just as clearly, she becomes captive to the myths around her and her son. Most of the show alternates between the mother railing against her son’s earthly tactics (and his unearthly reputation) and her unending, devastating heartbreak of having witnessed the most excruciating tortures culminating in her child’s assassination. Her ongoing denouncement of Jesus lore is delivered in the hectoring cadence of a lecturing poet. It’s no fault of the powerful performer; that’s the show Tóibín has written.

Unsurprisingly, the acts of her son, which Mary recounts with almost disgusted derision, account for much of the dramatic tension. A loving mother, she’s nonetheless averse to being defined by her child. She unleashes her most spirited decrial when addressing her son’s alleged supernatural abilities and divine nature. Though she denies his virgin conception and refutes his resurrection, she conversely pays witness to his alchemic wedding-day wine conjuring—while placing some doubt on the yield and its true provenance. However, though she doesn’t see the event, she wholly attests to his raising of Lazarus—with aghast disapproval. Tóibín’s Mary isn’t the first to liken the raising of Lazarus to a crime against the natural order, but this retelling of Lazarus’ second go-round is riveting and disturbing—as is Mary’s later recounting of her son’s crucifixion. Returned to our world, Lazarus is nonetheless barely recognizable as a living being. In one of the show’s subtler parallels, Jesus can no longer be identified as Mary’s son. First at the wedding, he doesn’t acknowledge his mother. Then on the cross, she can’t recognize him through his painfully distorted bloody face.

Dismissing all the talk of a new dawn ushered in by Christ’s martyrdom, Mary wishes for a simpler time when her child was a mere babe. Not an uncommon maternal desire, even if your kid ain’t the Messiah. She can’t even utter his name, riffing humorously on acceptable substitutes early in the show, as if admitting she can’t redefine what His name has come to signify. The relentless railing in the show—and its framing within a solo vehicle—approximates an irreligious sermon, an attempt to reclaim her unnamed son from the Son of God, and an effort to assert the very human, horribly painful experience of the mother. Though Mary denies the worth of her son’s sacrifice, we wouldn’t be here watching this if Jesus Christ—fact or fiction, myth or man—had been remembered as a mere mortal.

Aside from Mary’s heartrending sorrow and resolute anger, there are some early laughs. She humorously and pointedly assesses the apostles as misfits, the crowds of disciples as reckless, and her son as a petulant child who believes his own hype and grows cold and distant as a star. And by star I mean: a celebrity. The selfish, near lust for her son’s demise among his most fervent followers in her retelling is in stark contrast to the frigid approach to his disposal taken by the authorities near and unknown.

It’s an interesting enough take on a malleable character, and the show is expertly executed. But while more humor might be ill-advised, this monologue would benefit from less stridency. It’s tough listening to anyone—mythic virgin or tough-talking mama—complain for an hour and a half about how woefully misrepresented they’ve been. (Raymond Rehayem)