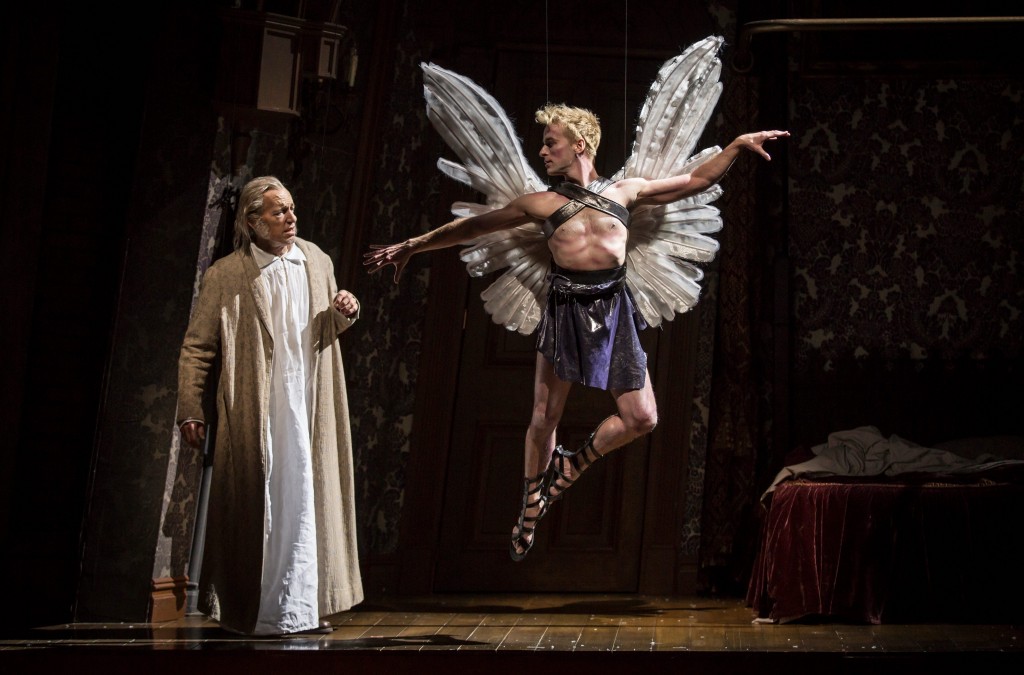 Goodman Theatre has perfected the holiday show in its annual production of “A Christmas Carol,” with superb, consciously colorblind casting, terrific scenic design by Todd Rosenthal—including a rendition of Ebenezer Scrooge’s home that seems to contort in expressionistic ways at times, as well as backdrops and streetscapes that create a holiday-card version of London—and, above all, a commitment to Charles Dickens’ text, which seems to have otherwise suffered from cultural amnesia as a result of its cartoonification by the mass-merchandising machine. By blending the bite of the words with the pleasant taste of period-authentic music and dances, the production manages to deliver everything you’d want from a Christmas show, that is, a meaningful message softened by a strong current of joy and hope. And though one could certainly argue this is not a show for young kids as it’s full of dark, adult themes, that argument would be a lost cause. And so Goodman makes the show accessible to the little ones with strokes of broad physical humor and ghosts that excite and certainly scare their share of the wee ones.

Larry Yando, one of Chicago’s premier actors, has a special talent for grumpy old men, from Roy Cohn in “Angels in America” at Court a few years back to his defining performance as Lear at Chicago Shakespeare this fall. So it’s a real pleasure to see how much fun he still seems to have as Scrooge in his seventh year in the role. Sure, he nails the miserly miserable old money lender, but he becomes a physical contortionist at times during his transformation into a man of mirth, with facial expressions so pronounced and funny you’d think a cartoonist was pulling his strings.

My history with this production goes back at least two decades, as both critic and, for a long run a few years back, as a parent bringing his family for an annual holiday tradition. It’s tempting for regulars to try to find changes in the production to comment upon, as a way to keep it fresh for ourselves. And though I do contemplate such things while I watch, they’re more furniture rearrangement than real reshaping of the production. And that’s a good thing, as this has been so well done for so long that to do more would risk the essence of its accomplishment. I left last night’s performance thinking this one, directed by Henry Wishcamper, had been the best yet, but I suspect that could also be the benevolence of time wearing at the memory and allowing the show to seem fresher and better every year.

Realistically, the biggest change in the twenty-five years or so I’ve been seeing the show is in me. As a young father, I remember being struck by the powerful liberality of the message, the decisive undercutting of the capitalistic ideal. Now, a bit older, with my kids fully grown and the loss of dear family members of my parents’ generation an unfortunate reality, the sense of loss in this tale is pervasive. From its opening lines about death embedded in a riff about doornails, this can be a dark and depressing story: the loss of Scrooge’s sister during childbirth, the relinquishment of Ebenezer’s one true love and, of course, the likely demise of the young child, Tiny Tim. Though Dickens wants us to see life as a continuum of the consequences of our words and deeds, the capriciousness of fate weighs ever more powerfully. One of the work’s most eloquent phrases cites us as “fellow passengers to the grave” as a comment on universal humanity, but that shared destination weighs heavily as well. (Brian Hieggelke)