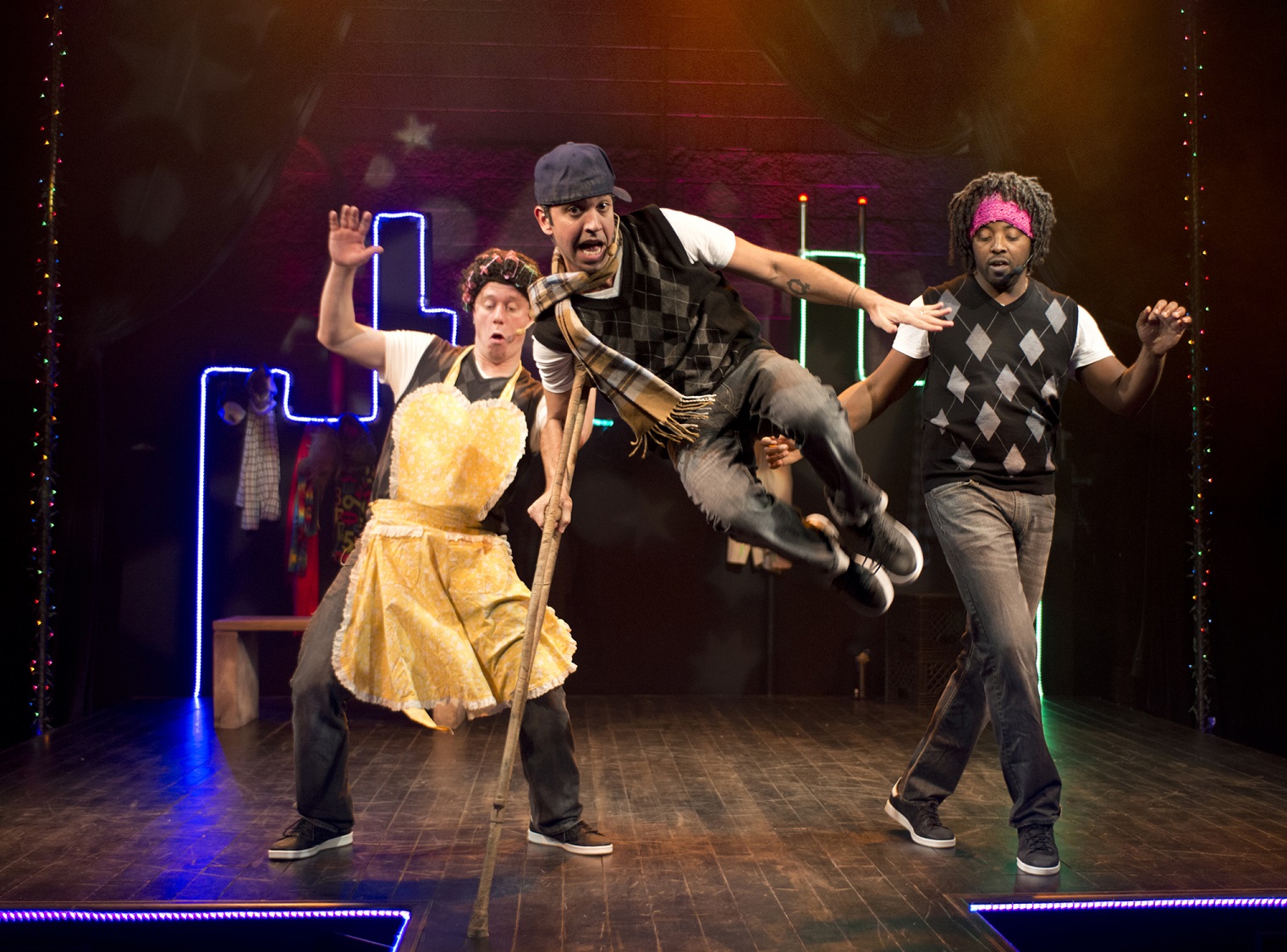 Recently a friend asked me what my favorite show of 2014 was. I didn’t have a good answer for him. This has a lot to do with the fact that I see more shows than the average theatergoer (complimentary tickets make it pretty easy) and so my mental rolodex is pretty stuffed. But a part of it is that the sheer number of pretty good to pretty bad to pretty mediocre shows can make it hard to differentiate. I can’t recall the diamonds because my brain is so full of rough. These are shows that, regardless of quality, feel like shows that are being done because, well, because a show “needed” to be done. Everyone performs the duties required of their job description—including the audience members—and the whole thing feels like work. Not “work” as in it seemed especially difficult, but “work” as in it’s something you do not because you want to but because it has to be done.

“A Q Brothers’ Christmas Carol” is not one of these shows. It is, in fact, the polar opposite. It is seventy-five-minutes of pure, unadulterated joy. If I could turn in a review that was just 500 smiley face emoticons, I would. That is both what the show is, and how it made me feel.

As they did previously with the works of Shakespeare in “Funk It Up About Nothin’” and “Othello: The Remix,” The Q Brothers have taken Charles Dickens’ “A Christmas Carol” and given it a full hip-hop transfusion. All the stodgy Victorian Englishness has been drained out and replaced with funky, irreverent and warm-hearted rap. With live beats from Q-brother collaborator DJ Super Nova, the show’s four performers, actual Q Brothers GQ and JQ along with Q Brothers ensemble members Jackson Doran and Postell Pringle, pingpong between characters and costumes and musical styles and comedy and pathos with the passion and energy of kids in the schoolyard. The show is a full-throated, high-speed, vibrantly theatrical yawp.

The action is updated to a modern-day Chicago. GQ’s Scrooge walks around with a cartoon-style bag of money and the kind of cheap grey suit that only a fantastically wealthy miser would wear. Doran’s Freddy the Nephew is a gay man with a husband, played by Pringle, who speaks entirely in hashtags. Pringle also plays Cratchit, a hard-working but low-earning African-American man whose family’s brand of poverty is far more South Side than East End. Tiny Tim apparently aspires to be the Next Lil’ Jon.

The show’s words and its wit are rapid-fire. There is an almost constant barrage of innuendo and wordplay and a ferocious comedic energy that fuels the forward motion. For instance, the ghost of Jacob Marley is not cursed with chains but rather with dreadlocks. Marley laments that in life he hated nothing more than reggae music and so fate has cursed him to eternity as a Rastafarian. Some shows would stop at the first level of this joke—Jacob Marley, Bob Marley, har har har—but the Q Brothers consistently push things into second, third and fourth gear. By the time we get to young Jacob Marley crowing about his “outsourced Jamaican Wig Factory,” which is literally nothing more than paying Jamaicans pennies to shave their hair and then selling it at a high markup, the Q Brothers have built an entire loony reality off of a single, somewhat obvious pun.

And then there’s the music. In short, it’s electric. The show uses “A Christmas Carol’s” time-travel trope as an opportunity to bring in the entire history of hip-hop. There is everything, from Run-D.M.C. and the Sugarhill Gang to Biggie and Jay-Z to Kanye and Drake. There are references to specific songs and nods to entire sub-movements. It’s as if the Q Brothers have made a mix-tape of their all-time favorite rap songs and are playing it for us with a big goofy smile on their faces. They love hip-hop and they are sharing that love with an audience so that the audience can love it too. Plus, they are apparently in agreement with me about dub-step: it sounds like the future and it is absolutely terrifying. Glad we’re on the same page. It’s the only music I have ever heard that makes me feel old for not liking it.

I don’t know if I really have an answer to my friend’s question. I have seen a lot of theater in 2014. I don’t know if there is one show that I can say I liked better than everything else. But I do know how I felt when I walked out of “A Q Brothers’ Christmas Carol;” I can report that I liked that feeling very much. I had laughed a lot and even cried a little. I had whooped and I had hollered and I had spontaneously burst into applause. I was a little bit exhausted but I was also completely energized. What I was feeling was actual, honest-to-god joy. I was 500 smiley face emoticons. And I haven’t seen any other show in 2014 that has made me feel that way. (Alex Huntsberger)