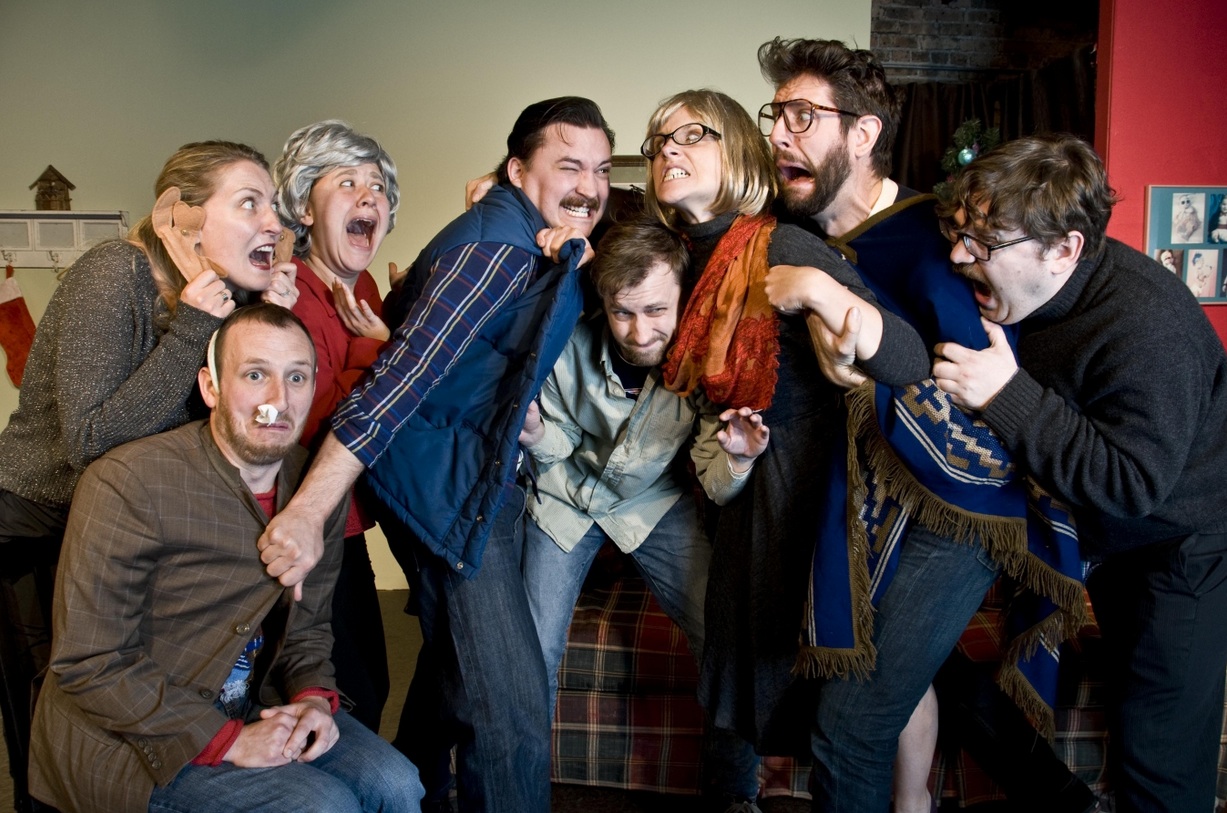 Christmas is fast approaching. For those unfamiliar with the season, in the world of “It’s Christmas Goddamnit!” it’s that merry time of year when even the kookiest of families gather together under a shared roof to enjoy a collective meal while emotionally tormenting each other, reveling in both their familial similarities and their personality differences. Director Charley Carroll, along with a solid group of writer/actors, has created a cast of characters with eccentricities and mannerisms that highlight each comedian’s specific comedic strengths. To be clear up front, it is very seldom that any of these characters feel like real people; emotional realism takes a clear backseat to setups and punchlines, both physical and verbal.

Patriarch Bill (Jimmy Pennington) is welcoming his three children home for the holidays, along with his wealthy but ornery brother Eli (a frank and cocksure Lee Russell). He’s also invited his new bride Bev (Rosie Moan) and her mentally unstable and socially awkward son Cory (a stoic Ryan Ben). It’s only been two years since Bill’s first wife—the mother of his children—passed away and he’s hesitant to tell his kids that he’s remarried. As it turns out, his hesitancy may be well-founded as his adult children—a perpetually single tae-bo instructor (Bridget Ballek), a perpetually unemployed manchild (Jeffrey Murdoch) and a perpetually condescending psychiatrist (Jo Scott, a standout, constantly seeming to barely conceal a ready-to-break-character grin)—are perhaps not quite ready to welcome a new stepmother.

At this point, dysfunctional Christmas family snipefests are as much a staple of the holiday season entertainment lineup as Ebenezer Scrooge’s change of heart or the Nutcracker’s magical transformation. But it’s the distinctively Annoyance take on familial discord that makes “It’s Christmas Goddamnit!” more than just another comically maladjusted family gathering. Murder, miscarriage and misfortune are all played for inappropriately hilarious laughs throughout. At the height of a particularly provocative scene one older audience member gasped audibly before whisper-shouting to her friends, “WHAT?!” This was followed shortly thereafter by a muffled and adamant “Oh. My. God.” Is there a better recommendation for button-pushing comedy?  (Zach Freeman)