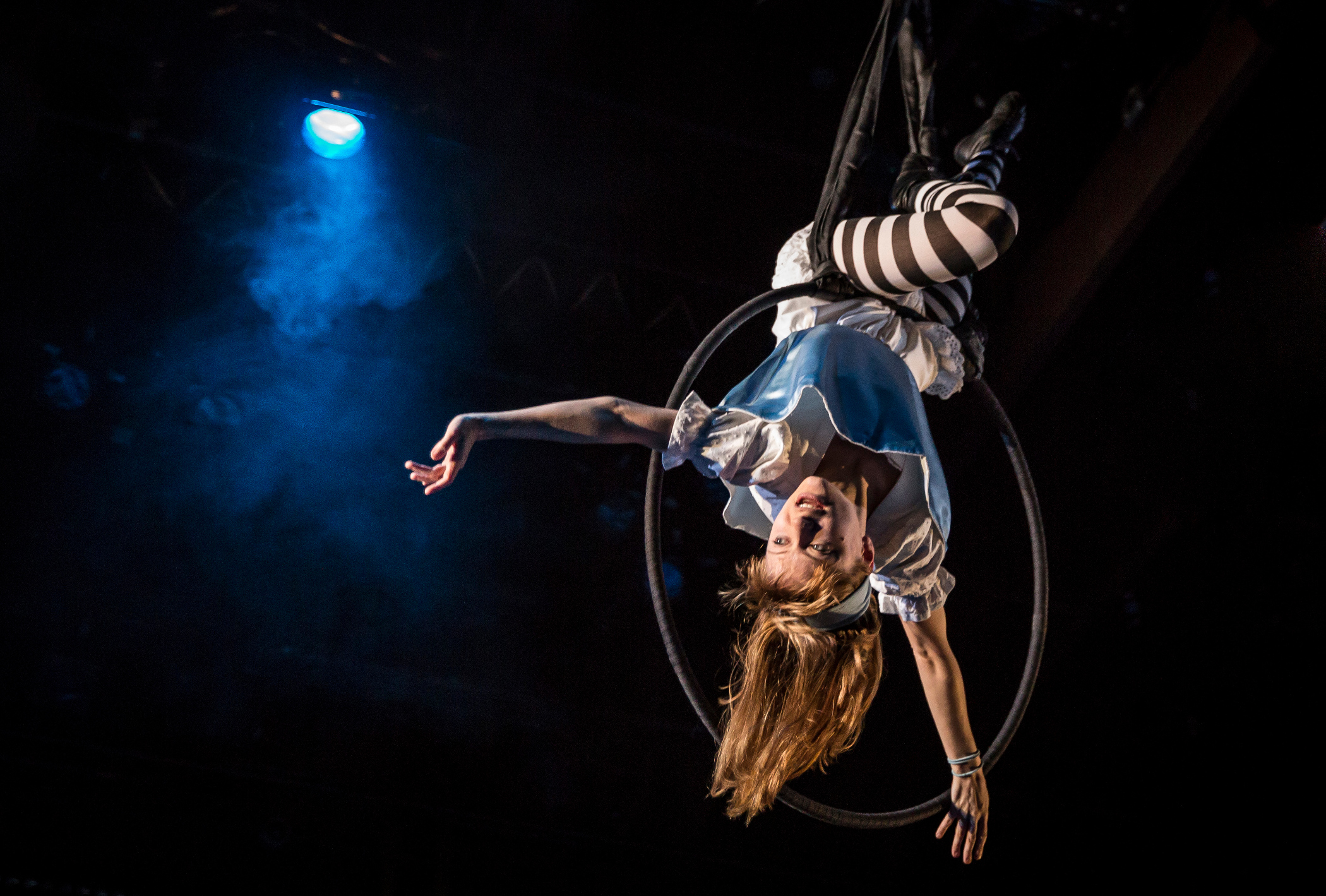 Nobody could dislike the 2014 version of “Lookingglass Alice,” not even a Scrooge who had wandered away from one of the several “Christmas Carol”s playing nearby. Lookingglass Theatre Company’s circus-style production, mounted in association with The Actors Gymnasium, is the perfect holiday family show, countering seasonal over-sentimentality disorder with a bracing blast of delightful and occasionally breathtaking nonsense.

Lewis Carroll’s barrage of dream logic leaves no Victorian value standing, as the author slyly deconstructs every certitude and tidy moral in sight. The masterful adaptation by David Catlin (who also directs) gets right to the heart of Carroll’s coolly subversive approach to childhood and life, integrating and balancing the writer’s linguistic anarchy with acrobatic spectacle and jaw-dropping theatrical effects.

The profusion of belovedly weird characters—the off-with-her-head/out-of-her-head Red Queen, beguiling Cheshire Cat (here grinless for some reason), feckless White Knight and reckless Humpty Dumpty, etc. etc.—are, amazingly, portrayed by a cast of just five, including one of two Alices, who alternate nights for this physically demanding role. I saw Lindsey Noel Whiting, whose droll, wise-beyond-her-years Alice is as lithe as a kitten and strong as a horse, swooping and twirling her way through the high-ceilinged circus ring of a space. (Alice #2 is Lauren Hirte, who starred in the original 2005 run.)

The other actors—Molly Brennan, most notably playing the whimsically terrifying Red Queen, dignified Kevin Douglas and crazy-eyed Anthony Fleming III as (among other things) the very odd couple of Mad Hatter and March Hare, and Samuel Taylor as the insecure, unicycle-mounted White Knight, who enjoys his own jokes tremendously—are equally engaging in their epic lunacy. Adapter-director Catlin understands that the power of Carroll’s storytelling is its Zen-like mystery, as Alice’s simple questions are only ever answered in the mind-expanding language of paradox. Alice’s initial impulse to move linearly toward the end of the chessboard turns into a sideways, associative, infinitely more interesting exploration of the absurd-yet-compelling situations that materialize beyond the looking glass of ordinary reality. “Why, sometimes I’ve believed as many as six impossible things before breakfast,” notes the White Queen, summing up Carroll’s philosophy.

Having staged “Alice” repeatedly over the years, Lookingglass has it down to a science. There’s an ease and delicacy to even the most technically challenging moments, as when the Red Queen—a good twelve-feet-high and about as broad, in one of Mara Blumenfeld’s many remarkable costumes—spins across the stage, a teacup daintily balanced on her wall-like shoulder. And when the (real) cracked eggshell that was Humpty Dumpty is whisked into a six-inch coffin, there’s an elusive melancholy to the image reminiscent of Magritte or the boxes of Joseph Cornell.

Early on, the Red Queen roars, “Take away the rule and what remains? Chaos!” But Lewis Carroll (AKA Charles Dodgson, mathematics lecturer at Oxford, whose non-Alice books include “Curiosa Mathematica, Part II: Pillow Problems Thought out During Sleepless Nights”) knew that what lies beyond and outside the rule is inspiration—which is just a fancy way of saying playfulness. “Lookingglass Alice” is pure play, pure joy, pure genius. (Hugh Iglarsh)