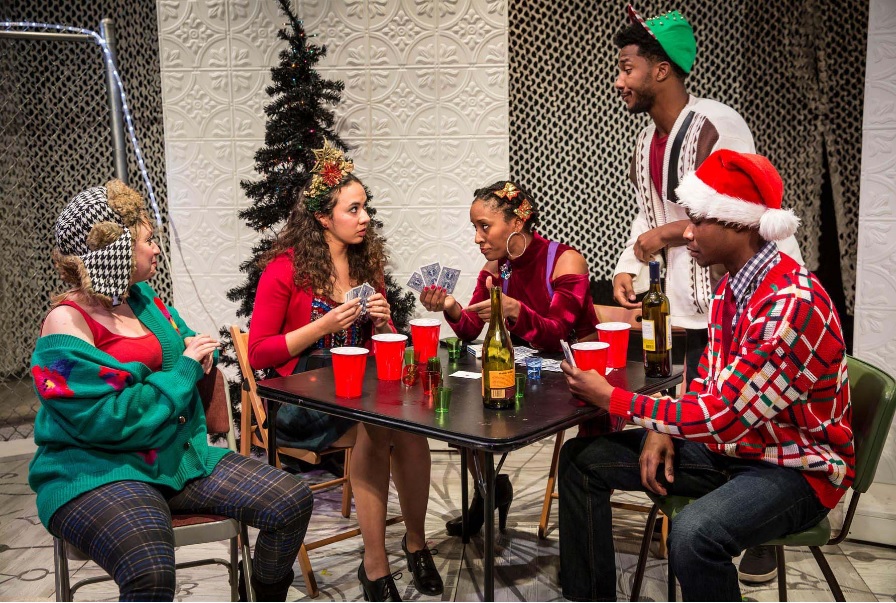 On my way to the theater I noticed the red-and-green lights burning Christmasy atop the Hancock and her sister-skyscrapers; maybe this caused me to feel a little Grinchy. Maybe my fingers were nervously drumming because I already knew the 110-minute evening was to be presented without intermission in a space where it was impossible to exit without crossing directly in front of the stage, leaving me to carefully consider my fluid intake. Or maybe I was just February-cold in November and it caused my heart to shrink two sizes. But whatever the reason, I found myself unable to make the “connection” to Step Up Productions’ theatrical Christmas card proposed by artistic director Elizabeth Antonucci’s program notes. Six musings billed as one-acts played as rehearsed skits, little moments of character and situation that could have fed on audience reaction and floated on improvisation, but instead suffered the cement shoes of over-scripting.

In “Lunch Box Love,” a monotonous non-song pierces while two charming actors twirled and pantomimed their way silently through another telling of “The Fourposter.” Second comes “Christmas Armaments,” featuring two hard-working actors shouldering more plot twists than time can flesh. “Perfect Space” has the advantage of the talents of actors Maria Margaglione and Conor Woods, both capable of turning pathos to humor on a dime; this does not mean they should be made to undergo compositional whiplash. “Christmas at the Staples Center” is the story of a one-night stand accompanied by the casual mention that Christmas is a day or two away, which is surprising since the duo involved are occupying next-door booths at a trade show. Just before Christmas. As they are always scheduled.

“Gift Horse Grill” gifts us six engaging actors, five a cookie-cutter composite of Americans who might be in the market for slavery reparations as delivered by a bureau agent St. Nick; in this short format, the exploration of six characters is prohibitive. We finish with “A Couple of Nobodies,” a revisiting of the book that gave us “La Bohême” and the subsequent “Rent.” The strumpet has lost her key, and the bookworm who composes dedications to himself and records them on the facing-pages of the tomes of dead authors meet and fall into something like love over Emily Dickinson in a room so cold that the author has to wear a scarf.

With six separate entertainments on offering, in a theater with an open bar, would an intermission have hurt the evening? The audience could have had a moment of lavatory relief, fed the hungry parking meters that threatened until 10pm and ordered a double. (And why is this kind of programming permeating the Chicago theater scene?) This is Step Up’s second annual “HoliDaze” offering and it could be a four-skit, belly-laughing, let’s-get-Christmasy celebration. But someone needs to carve this roast beast. (Aaron Hunt)