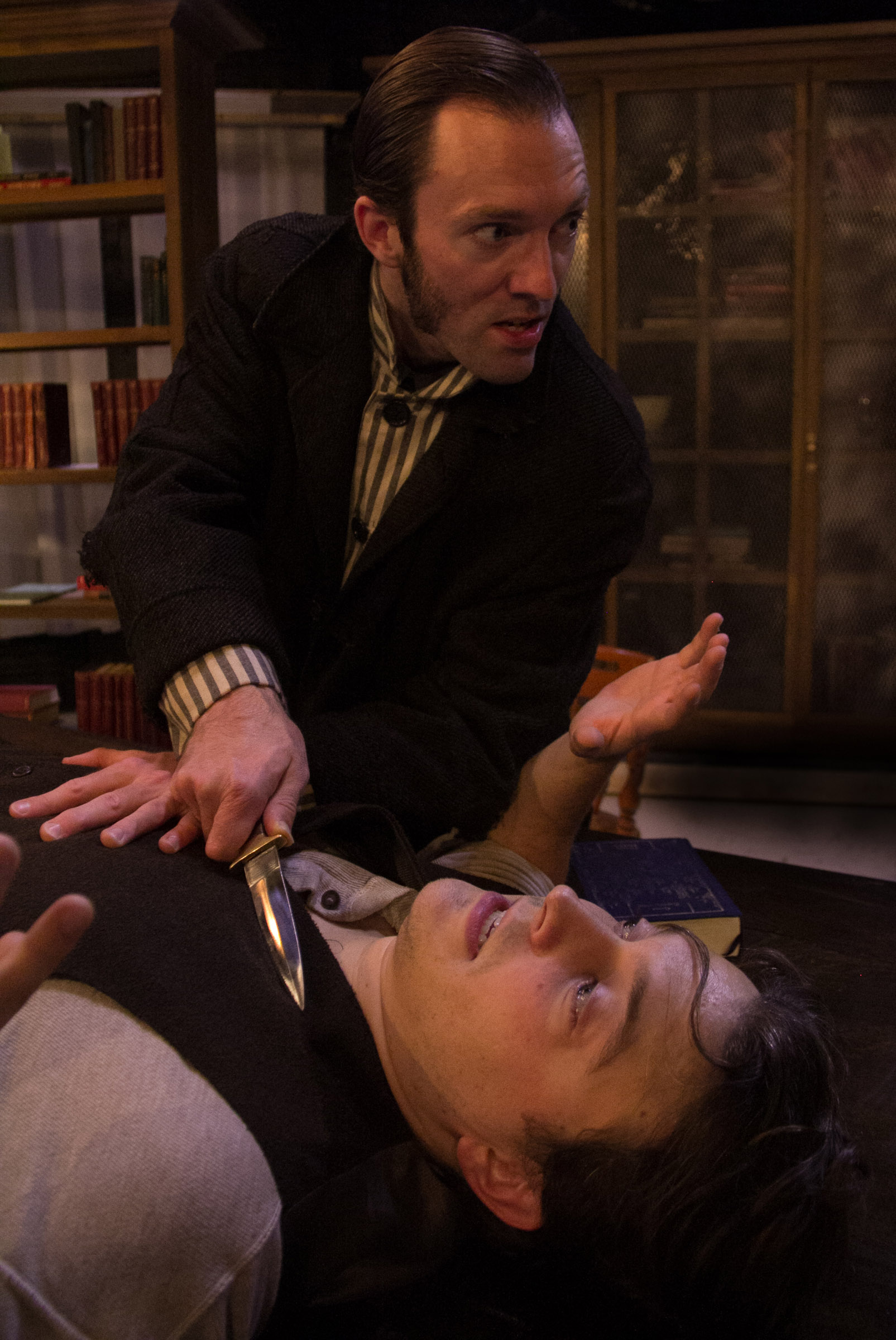 The first thing that strikes you about Strawdog’s restaging of Charles Dickens’ “Great Expectations” is the sheer number of books taking up the stage. They are stacked upon each other in bookcases, used as props, and then eventually underfoot of the characters as they deal with the aftermath of several plot points suddenly crashing down. At times the play resembles a staged reading with actors holding up books to read aloud and passing them to one another as if to affirm the author’s intent. It also is beautifully acted out with the action on stage serving as a complement to the brilliantly descriptive words written more than a hundred-and-fifty years ago. While Gale Childs Daly’s adaptation of “Great Expectations” might focus more on class issues than the original source material, it is her lavish attention to the words that make this ambitious undertaking so successful.

“Great Expectations” tells the tale of a parentless lad named Pip (Mike Tepeli) whose chance encounter with an escaped convict propels him from the life of a luckless orphan, raised meanly by an older sister, to that of a London gentleman. Foremost among Pip’s expectations are marriage to fellow orphan Estella (Amanda Drinkall) who is raised by her adopted mother, Miss Havisham (Mary Winn Heider), to break every man’s heart. Miss Havisham’s motivations are clear; she was stood up on her wedding day and forever more wears a yellowed wedding dress. She takes particular delight in commanding Pip to play with Estella while constantly reminding him of her beauty (and how unattainable she really is).

Other memorable characters include the cold and calculating lawyer Mr. Jaggers (Cody Proctor) who knowingly tells Pip to “take nothing on its looks; take everything on its evidence” and his forever loyal brother-in-law Joe (Paige Smith) whose lack of cultured manners is an embarrassment to the up-and-coming Pip. Besides offering up rich characters, Dickens’ beloved classic has enough twists and turns to keep audiences engaged (so much so that perhaps the story is actually less believable than the one about a bunch of ghosts who visit a rich guy in order to teach him a lesson).

Director Jason Gerace’s careful attention to detail is made possible by the production’s two-hours-plus running time (with one intermission). Characters are given enough space and time to fully develop and the six-actor ensemble here (with their spot-on dialects and effortless transitions between characters) approaches perfection. Tepeli is especially impressive as Pip and infuses his character with enough likeability and virtue that you become invested in him becoming a better man by the end. Other standout performances are turned in by Drinkall and Smith, both playing multiple roles. Taryn Rosenquist’s work on the violin (which delightfully lingers at the periphery of the performance) is also used to good effect. Gerace has created a truly moving and perfectly realized celebration of a literary classic that is guaranteed to meet your expectations. (Noel Schecter)