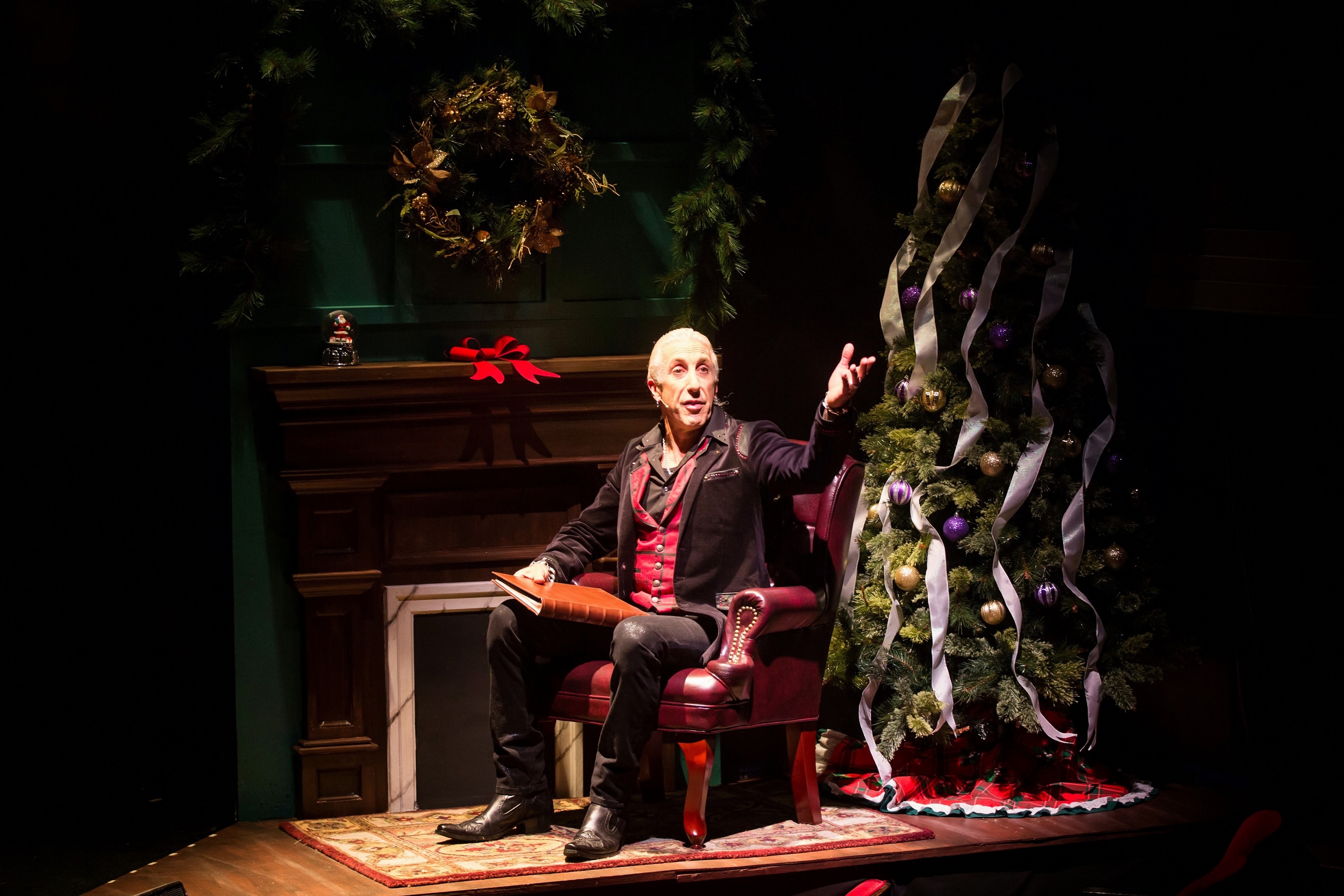 What happens when four guys from failed bands join together, make a deal with the devil and pledge their souls to Satan in order to find fame and fortune? When it takes place in a show entitled “Dee Snider’s Rock & Roll Christmas Tale, ” it’s safe to guess that the result will be something a little… twisted, perhaps. Directed by Adam John Hunter, who also staged the national tours of “Sweeney Todd” and “Rock of Ages,” this world premiere is a family-friendly Christmas rockfest.

Hunter steering this production makes sense considering that the content of this show is so reminiscent of the latter (which also features songs by Twisted Sister) that, in fact, one could almost call this a “Rock of Ages” holiday sequel. While both shows feature a narrator, in “Rock & Roll Christmas Tale,” none other than Dee Snider himself takes on the role of spot-lit storyteller. While his name may be in the title, Snider’s monologues can get a bit lengthy, and often feel unnecessary, as the cast does an excellent job of delivering the funny and clever dialogue of the book. However, what ultimately sets the two shows apart is also the thing that ties them together: the music. “Rock of Ages” has more than twenty songs in its performance. Here there are thirteen, most of which are Twisted Sister songs or mash-ups of the hair-metal-band’s rock anthems with well-known Christmas songs. (Twisted Sister released a Christmas album, aptly titled “A Twisted Christmas” in 2006, making the originality of the mash-ups slightly less impressive.)

The acting and rocking talent of the cast truly shines in both its musical numbers and comedic timing. Adam Michaels (front man, D.D.), Dan Peters (Johnny, on guitar and also the group’s “acting” manager), Tommy Hahn (Tank, the bassist) and Wilam Tarris (Ralph, the drummer) make up the four-piece, down-on-their-luck band Daisy Cuter (pronounced “cutter”). Though Ralph has played with the band for seven years, he’s still considered “the new guy” and there are clear choices that make Tarris’ show-stealing performance one to watch. Aside from Tarris’ formidable talent, Ralph, on the page, is clearly the most quirky of the quartet (at one point, he appears in a Darth Vader costume while the rest of the band is in skull masks and other black attire) and his character has a clear love interest, Club Dazzle manager, Suzette (Keely Vasquez). At one point, as Tarris begins to sing “The Price” using a stuffed Rudolph to further illustrate his sadness at his rejection by Suzette, the song shifts from melancholy to uplifting and soon Rudolph is happily swaying in the air with Tarris smoothly guiding his way.

The production value of this show is also true to arena-rock form. The band uses guitar picks that are printed with the Daisy Cuter logo on one side and the show insignia on the other and throws them out to the crowd after certain numbers. Audience members also receive a green or red light-up keychain that they are encouraged to use whenever they enjoy a moment in the show (like a fire-safe Christmas lighter). In spite of its flaws—it could be improved by more music and less narration—this show is more than just an older rocker reveling in some of his past glory days. The finale, led by Snider, has everyone on their feet singing and dancing to his original Christmas tune “The Magic of Christmas Day (God Bless Us Everyone).” (Mary Kroeck)