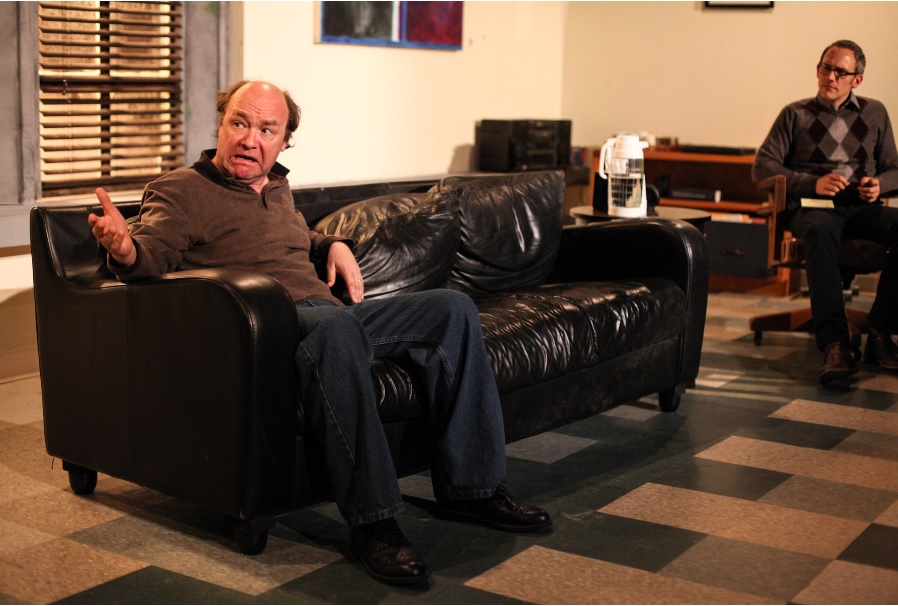 Last year, Seanachai Theatre Company—recently reborn as Irish Theatre of Chicago—brought to life one of the most pleasing Christmas-adjacent shows that this town has seen in recent memory. It was a revival of Irish playwright Conor McPherson’s “The Seafarer,” a play in which a man finds himself in a rundown flat on Christmas Eve playing a card game against the devil for his immortal soul. Director Matt Miller’s production was alternately warm and funny and harrowing and sloshed. It squeezed every drop of cynical Irish cheer from McPherson’s wonderful script and went on to win a well-earned Jeff award for Best Ensemble.

Perhaps then my hopes were a bit too high for ITC’s revival of McPherson’s 2004 play “Shining City.” Miller did not return for this production; ITC ensemble member Jeff Christian directs instead. A pair of cast members from “The Seafarer” (Brad Armacost and Shane Kenyon, both ITC ensemble members) are on hand though. “Shining City” is a quiet play, a literary ghost story that considers the hold that stories of all kinds have on our lives; the stories we tell each other versus the stories we tell ourselves, and how often the stories that we refuse to tell ourselves end up being the ones we most need to hear. And as it is a story about storytelling, there is a great deal of, well, storytelling that happens. One actor sitting across from another, embarking on a long and winding tale. For a company that so often has a fantastic handle on the Irish sensibility, this production fails in making these moments sing, and the entire show thus hits a somewhat false, flat note.

The show follows a pair of men, the recently widowed John (Armacost) and his recently sorta-kinda single therapist Ian (Coburn Goss). John has been spooked by the apparition of his dead wife and so has gone to Ian for a dose of the talking cure. Ian meanwhile is separating from his girlfriend Neasa (Carolyn Kruse) in that annoying way where he wants to commit a hurtful act without being seen as a hurtful person. As John delves deeper and deeper into his guilt surrounding his wife’s death, Ian’s own penchant for similar self-delusion becomes apparent. Kenyon appears as perhaps the play’s most stable, grounded character. As to avoid spoilers, his identity shall not be named here.

The show’s centerpiece is a massive turducken of a monologue that takes about half of the show’s 100-minute running-time, yet Armacost (fantastic as the self-combusting John) delivers the entire thing with a quiet, plain-spoken grace, finding shade after shade of nuance as more and more of John’s scurrilousness is revealed, and taking what could easily be an over-the-top aria of Irish repression and turning it into a gentle, mourning ballad. However, Goss is not able to deliver in the same register. At times his Ian seems almost stereotypically “Irish.” (His grasp on the accent isn’t great, which doesn’t help.) Next to Armacost’s rigorous, hard-won realness, it is easy to tell that Goss is putting on a performance.

But blame here ultimately falls on the head of the director, Jeff Christian. Little has been done to shape the play short of basic blocking and an occasional change in volume or tempo. Christian seems to rely on Armacost’s (albeit considerable) strengths as an actor in order to get the ship home safe. As such, whenever Armacost is offstage, things drift and there are even moments during his scenes with Goss where his hand slips off the helm. An unimaginative sound design by Victoria Delorio that almost entirely consists of scene-change folk music (sung by Christian and Matt Kahler) doesn’t help either. Long pockets of dead-air silence (or indeed, sounds coming in from other spaces at The Den) leave the actors stranded in a vacuum.

Everything in “The Shining City” except for Armacost’s performance (and Kenyon’s as well, though his stage-time is brief) lacks that kind of lived-in quality that made Miller’s “The Seafarer” such a success. “Shining City” never feels like anything other than a play. We can hear the story being told, but we never once lose ourselves inside it. (Alex Huntsberger)