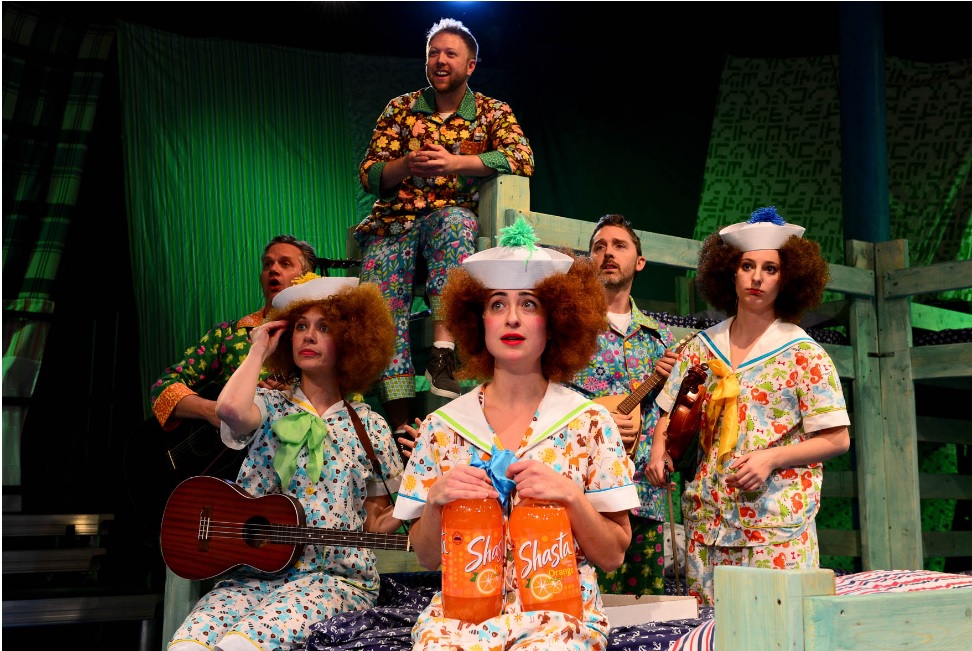 First, he turned “Pirates of Penzance” into a beach-bum sing-along. Next, he took “The Mikado” and made a three-ring circus with all three rings overlapping, like a Venn diagram. And now, Sean Graney has arrived at the inevitable: Gilbert and Sullivan’s “H.M.S. Pinafore.” This time around he has picked a theme that perhaps best encapsulates his madmen-running-the-madhouse promenade style, turning the whole thing into a slumber party. What does a slumber party have to do with a show about the Victorian-era British Navy, you might ask?

From what I can tell, slumber parties have as much to do with the British Navy as the Shogun’s Japan has to do with PT Barnum and high seas profiteering has to do with Jimmy Buffett. That is to say, not a whole heck of a lot. And yet these three shows, currently running in rep at The Den Theatre’s new ground-floor space, all feel exactly right. They aren’t strict adaptations, and “H.M.S. Pinafore” is especially generous with the chopping and the splicing and the devil-may-care-but-we-sure-as-heck-don’t textural additions. They are re-imaginings. Graney has actually gone and broken these operettas down into their component parts and then built them back up again according to his own crazed design. “H.M.S. Pinafore” is a slumber party because Sean Graney’s “H.M.S. Pinafore” feels like a slumber party. So nyeh!

The set, by Michael Smallwood, takes advantage of The Den’s impressive verticality—especially compared to the basement at the Chopin where both “Pirates” and “Mikado” premiered. It is essentially a bedroom that’s been exploded into a playground, enclosed by massive blankets like a pillow Fort Knox. There are large bunk-bed structures that the audience is invited to sit on, one even equipped with a slide. In the middle of everything sits a massive pillow pit. Audience members are invited to sit there as well. Really, audience members are invited to sit pretty much anywhere. They will, of course, be asked to move when an actor or actress comes barreling through, but that is half the fun of these shows: they’re the closest theater can come to being a contact sport. (For audience members who fear maiming, or maybe just an actor making eye contact with them, there are also regular seats on three sides of the space. I can’t say I recommend them as sight lines do get spotty.)

For those not familiar with what “H.M.S. Pinafore” calls a plot, it’s pretty dumb. Some might say that it is “ironically dumb.” But others might say that those people are themselves pretty dumb. Let’s proceed. In a welcome twist, Graney has gender-flopped the entire cast; male characters are now female characters. This both provides a fantastic opportunity for a number of actresses to perform meaty, action-driven roles and actually makes a lot of sense as, what else was Queen Victoria’s England if not one giant matriarchy? The plot-like substance concerns the romantic travails of a young sailress named Ralphina Rackstraw (Dana Omar) who joins the crew of the H.M.S. Pinafore. The ship is captained by the magnanimous Captain Cat Coran (Emily Casey) whose doe-eyed son Joseph (Doug Pawlik) Ralphina immediately falls in love with. Unfortunately, Joseph is set to be married to the bug-eyed, buoyantly egoed, and batpoop crazy Admiral Dame Jo-Ann (Christine Stulik).

I know this might be shocking to hear, but hijinks do ensue. And ensue. And ensue. The show is approximately ninety-five-percent hijinks. And fifty-percent of those ensue solely from Stulik as Admiral Dame Jo-Ann. She is the ideal Graney performer: electric and kind of mad, with a vaudevillian’s flare for the comedic. Her performance of “When I Was A Lad” (alongside Matt Kahler as Cousin Heebies) brings down the house and then holds it down and gives it a noogie.

If there is one flaw to the show it is this: it might actually be too chaotic for its own good. As Graney has progressed from “Pirates” to “Mikado” and now to “Pinafore” he has gotten bolder and wilder with both his adaptation and his staging. “Pinafore” is not only the loosest adaptation of the three; it also has an obstacle-course set and a pace that could best be described as “your junior-year roommate on speed at 3am the night before his Econ final.” Oh, and of course the actors all play their own instruments, with Gilbert and Sullivan’s score retrofitted by Kahler and Andra Velis Simon to fit guitars, banjoes, ukuleles, etc. The bigger space at The Den means moments on one side of the stage get lost to audiences standing on the other. The show is like a gyre, spinning up into itself, ever faster, ever wider. As occasionally happens with those darn gyres, the center doesn’t hold. It gives out and all the different elements at play spin off into the ether.

Or to put it in terms more befitting of Graney’s style: there are several moments during “H.M.S. Pinafore” when it seems like the inmates have truly, finally taken over the asylum. (Alex Huntsberger)