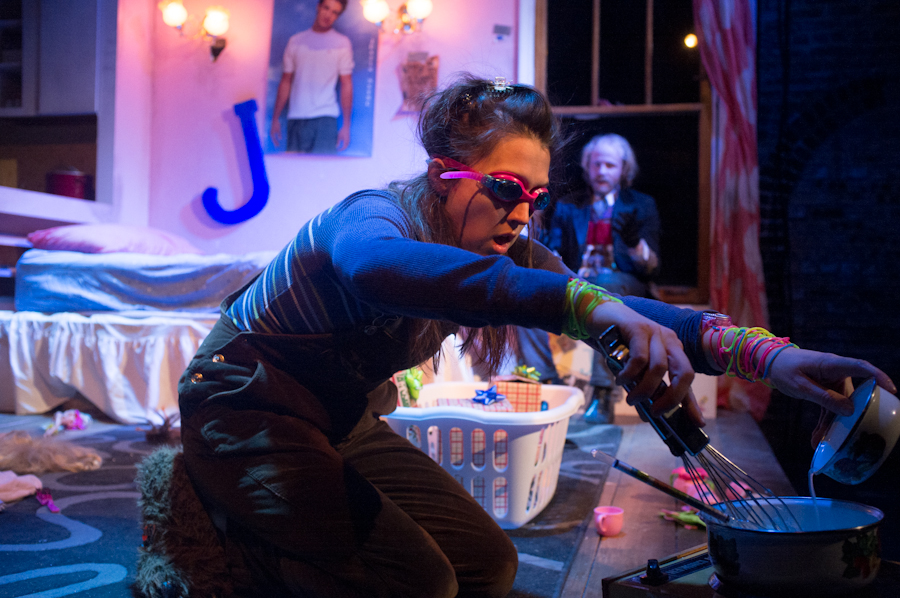 Things are not exactly going as planned for the matriarch in Sheila Callaghan’s “Crumble (Lay Me Down, Justin Timberlake).” One year after being widowed by a freak Christmas Day accident, she finds herself living in a murderous apartment (personified by Tim Parker) with her depressed and maybe suicidal preteen daughter Janice. The only person she has to confide in is her crazy cat-lady sister who offers nothing but bad advice. Both mother and daughter are so lonely they take to summoning men capable of catering to their emotional needs (for Janice it is an ‘N Sync-era Justin Timberlake; the mom is more of an Indiana Jones type). These apparitions pretty much stick to telling the women what they want to hear which in the case of Janice is pretty darn scary.

There is a lot going for “Crumble,” beginning with the over-the-top theatrical Tim Parker who gives the perfect voice to an elegantly fading mansion apartment that has seen better days.  The ceiling plaster is crumbling, wires short-circuit, and The Apartment pines over and over again for the days when servant girls waxed his floor, their knees digging into the wood. Repeatedly he implores someone, anyone, to just touch him, to let some steam roll off his radiator. Besides being sexually frustrated, The Apartment is also vindictive and will do anything to survive. He is by far the most complex and engaging character on stage.

The ghost-like specters of Harrison Ford and Justin Timberlake (Curtis Jackson) also offer an interesting insight into the warping nature of grief (which does often produce hallucinations). Other characters, like Janice’s aunt, are more distracting than clever. Exactly how funny is a woman with fifty-seven cats? Not enough to justify the inordinate amount of time spent watching her talk to her sister on the phone while tending her feline herd. Meanwhile, not enough time is spent exploring the complex relationship between mother and daughter. While director/artistic director AJ Ware presents a highly stylized and visually intriguing world of ruin and recovery, a more stripped-down production might have allowed for more character development.

“Crumble” concludes more powerful than it begins. Although not a happy ending by conventional standards, it allows Janice’s pain a physical manifestation and perhaps a chance to heal. Meanwhile The Apartment lives on, a reminder to take better care of your home. (Noel Schecter)