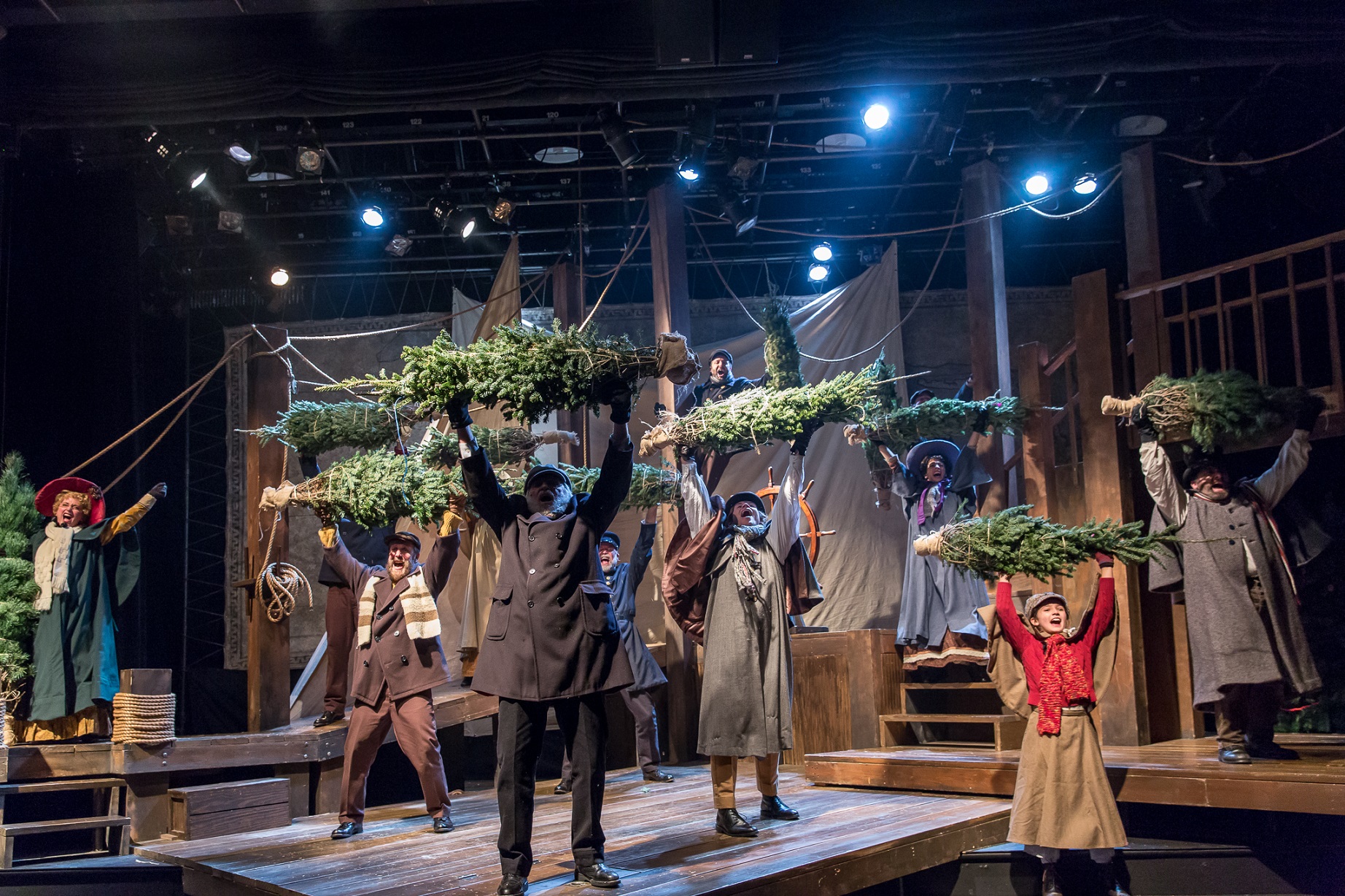 In a city like Chicago, it’s hard to imagine not being able to get anything at practically any time. The internet and online sales make it even easier. Yet, back in the early twentieth century, getting things—like Christmas trees—in this toddlin’ town wasn’t so easy. With immigrants crossing the ocean regularly and longing for a holiday comfort so cherished in their homelands, the market was ripe. Thus a special ship made its way across the unpredictable lake from Michigan’s Upper Peninsula to the Windy City to bring joy into the homes of many. That true story is at the heart of “The Christmas Schooner.”

The show’s book and score use the history of the Rouse Simmons, a schooner ship that sailed across Lake Michigan each November for many years carrying Christmas trees to Chicagoans. Similar to the script, historical documents show that the Simmons’ captain, Herman Schuenemann would sell the trees on the Clark Street Docks and occasionally gave away trees to needy families. Unlike the script, the Simmons and its crew have a slightly darker ending. Rather than the captain being the only soul lost on a turbulent November night in 1912, others went down with the sinking ship, though no one knows exactly how many. While the Simmons was not the first or the only ship to carry holiday evergreens across the lake, its wreck, to many historians, marks the beginning of the end of schooners sailing the rough winter waters to sell festive tannenbaums.

Jeff Award-winner Stef Tovar is the ship’s captain, Peter Stossel, and Brianna Borger is his wife, Alma. Tovar and Borger complement each other well in these roles. Both are emotionally strong and rely on each other to heighten moments of laughter and frustration. Yet, it is the interaction between Borger and James Wilson Sherman (as Gustav Stossel) that is most powerful, particularly in the second act. As Sherman and Borger perform the reprise of “When I Look at You,” their heartache is palpable, and so is their resolve to complete Peter’s work. Though varied in age and experience, the performers harmoniously deliver each of the production’s numbers with just the right tone and timbre.

Mike Ross’ sound design complements the live, unseen orchestra with pre-show sounds of seagulls and waves that immediately prepare the audience for an adventure at sea (or at lake, as the case may be). The set, designed by Jacqueline and Richard Penrod, has impressive, multi-functional layers serving as ship, house and dock. However, this also makes it somewhat challenging to know where the action is taking place in some of the early scenes.

The lyrics of one of the show’s musical numbers proclaims that “The heartbeat of life is in our stories and our songs” while another notes that “The true joy of Christmas is not found in our riches, but in our service to others.” Mercury Theater’s Matthew Gunnels passed away from cancer this year and in his honor donations are collected at the end of each performance for the American Cancer Society. This is a fitting homage to the show as well, since at its core is the message that kindness toward others should always be a priority. (Mary Kroeck)