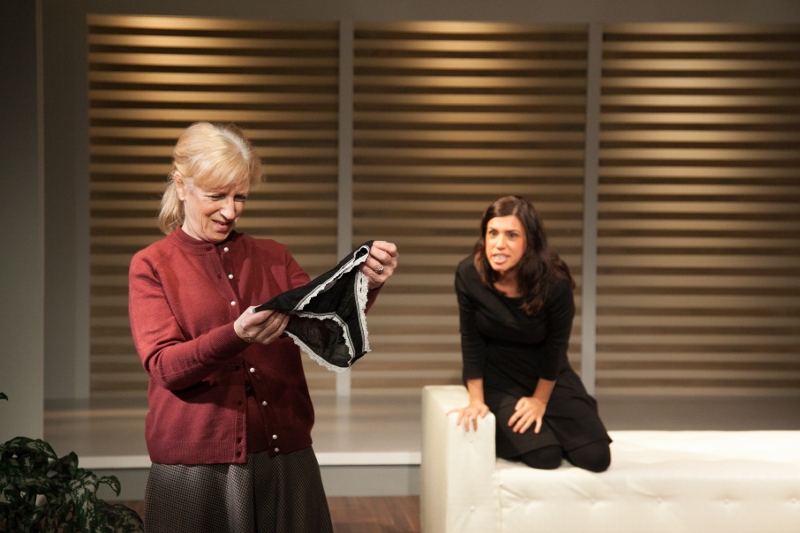 Remy Bumppo’s production of Sarah Ruhl’s “The Clean House” is presented with a spotless understanding of the playwright’s sense of a compositional freedom of space and interval that invites the audience to set aside traditional, linear expectations and connect emotionally to the psychological storytelling.

Scenic designer Grant Sabin has created a white-white set—white couches, white rugs, white chairs, so much white that my teeth were set on edge before the houselights went down; his series of easily-drawn curtains permit scenes of otherness, real or hoped-for, to occur spontaneously and in concert with the seeming present. Janice Pytel’s costumes continue the muting of theatrical specificity, using (in most instances), oft-scrubbed colors and unspecific time-periods, and Charles Cooper’s lighting fades in and out slyly, providing a gentle translucency that reminds us that the passage of hours or months is irrelevant.

And director Ann Filmer showcases her gift for inviting actors to allow the characters to find them, rather than building predetermined personages with intellectualized rough edges of brick and mortar that can disconcert and disconnect; every performance reads as genuine and organic.

Welcomed Chicago newcomer Alice da Cunha’s envelopment by Ruhl’s sassy, joke-composing, Brazilian anti-maid Matilde easily recalls Thornton Wilder’s brilliant creation of Sabina in “The Skin of Our Teeth” when she opens the play with an untranslated monologue in Portuguese; da Cunha has so much fun in the telling that by the fourth sentence the audience is on the roller-coaster with her, and the words don’t matter because the joy in the telling is so palpable.

As Virginia, Annabel Armour is physically and vocally transformed into a creature as seemingly mentally and emotionally disjointed as her sister is successful and controlled, but often interjecting singular notice of the elephant stomping about the colorless carpet, reminiscent of Swoosie Kurtz’s turn as Bananas in John Guare’s wack-a-doodle, family tragedy “The House of Blue Leaves.” Patrice Egleston’s floundering wife Lane finds herself shipwrecked, then summons the strength to swim ashore to her island of humanity; Egleston magically presents outward ice with an inward, burning confusion. Charin Alvarez is achingly true as Ana, the dying Bashert to Lane’s heretofore regular-as-rain, but secretly deep and Antrobus-esque husband Charles (Shawn Douglass).

If Ana and Matilde speak to each other in Portuguese, snow falls in the living room, Charles goes to the North Pole to find a yew tree and then has to earn a pilot’s license to bring it back. Virginia cleans her sister’s house because cleaning makes Matilde depressed. One character can see another character’s imaginings, and a joke can provide begged-for euthanasia… It would seem we have a fragmented tragedy on our hands. But in the metaphysical tradition of Wilder and Guare, the humanity and the humor of the writing keeps the audience belly-laughing, then chuckling, and still smiling at the heart-rending, healing conclusion. (Aaron Hunt)