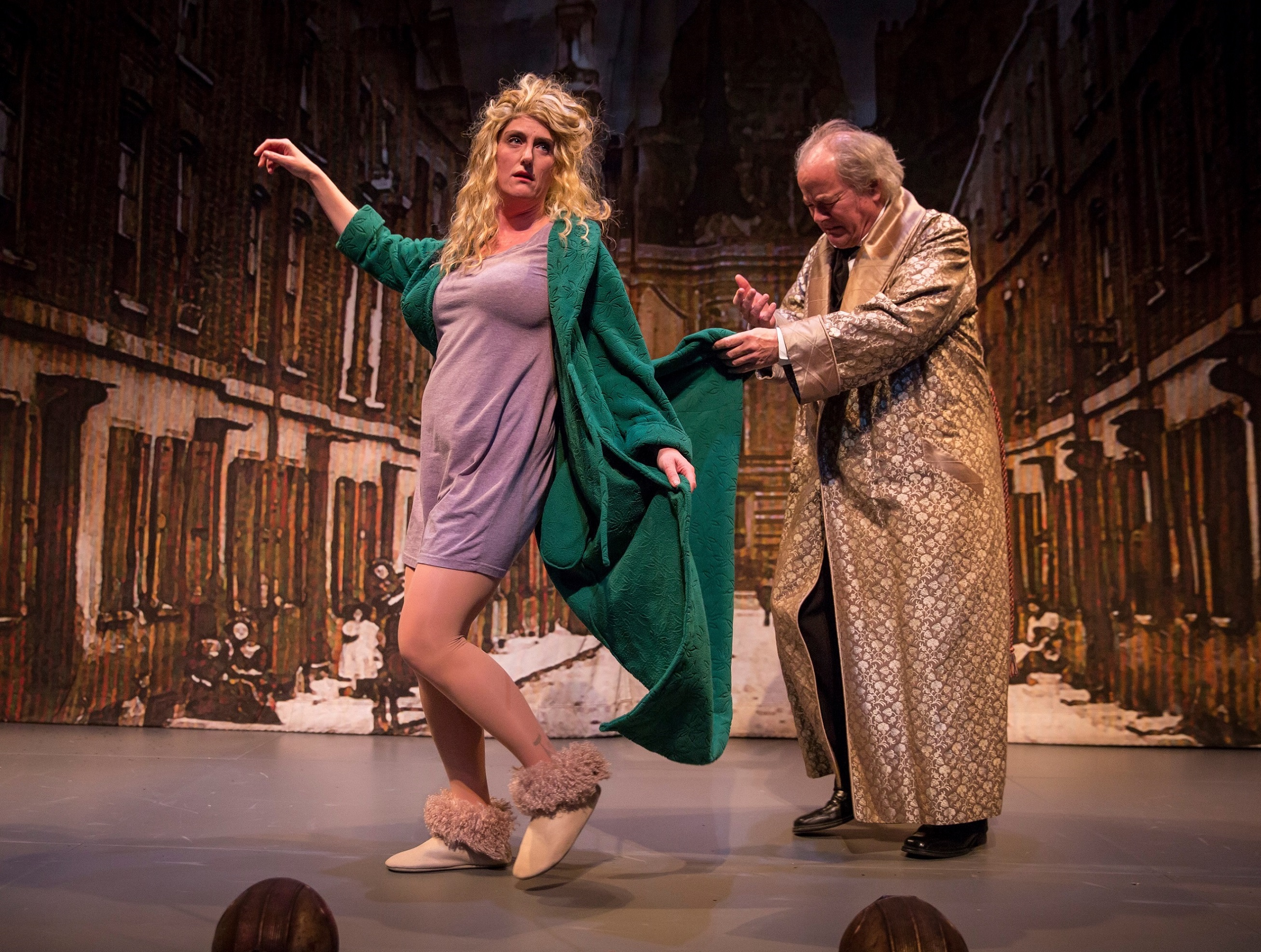 It’s not a bad script that renders “Twist Your Dickens, Or Scrooge You!” an unfunny, lackluster mess. It’s a terrible script. Penned by Peter Gwinn and Bobby Mort (Emmy Award winners for their work on “The Colbert Report”), this slapdash comedy show doesn’t know whether it wants to fully commit to skewering the classic Dickens tale or just throw together a slew of vaguely related  holiday sketches and hope audiences are in good enough Christmas spirits to laugh at them. The result is a surprisingly awkward evening of almost-comedy.

I say “surprisingly” because this is an exceptionally strong cast of comedians, led—and given gravitas—by Chicago stalwart Francis Guinan (who wouldn’t be out of place playing Scrooge in Goodman’s annual rendition of “A Christmas Carol” in the next theater over). But while the cast mostly throws themselves into the various bits—nineteenth-century commercials! A Dickensian orphan protest! Taylor Swift and Kelly Clarkson?!?—even their engagement with the material flags at times. Director Matt Hovde has not found the rhythm of this piece—if there is one—and it shows in various awkward lulls throughout. Even a nightly celebrity cameo—filled by Rick Bayless the night I saw it—feels shoehorned in and uninspired, leaving the celebrity bookending a brief “Peanuts” sketch by introducing it and then quickly saying goodnight afterwards.

The jokes that work best are the bits interspersed throughout a parodic take on the original “A Christmas Carol” story: semantic arguments between Scrooge and Jacob Marley (Gwinn), Scrooge sifting through his mail, a hungover Ghost of Christmas Present (Beth Melewski, the only cast member who manages to shine here). If sketches were cut and this were expanded upon, Gwinn and Mort might have something. As it stands, the majority of the show is distracting, detracting fluff, such as a boorish audience member (an enthusiastic Frank Caeti) who repeatedly interrupts the proceedings to complain. Breaking the fourth wall can be funny. But breaking it in the same way again and again and again is both tedious and a sure sign of insecure writing. To be fair, the writers are right to be insecure about this script; by the time Bob Cratchit (Tim Stoltenberg) remarks “What you talkin’ bout Ebenezer?!?” at Scrooge’s change of heart, it’s clear we have a yuletide dud on our hands.

The Second City is currently running an excellent holiday-themed revue and The Goodman’s “A Christmas Carol” is the best in the city—skip this collaboration and go see either of those (or both!). (Zach Freeman)