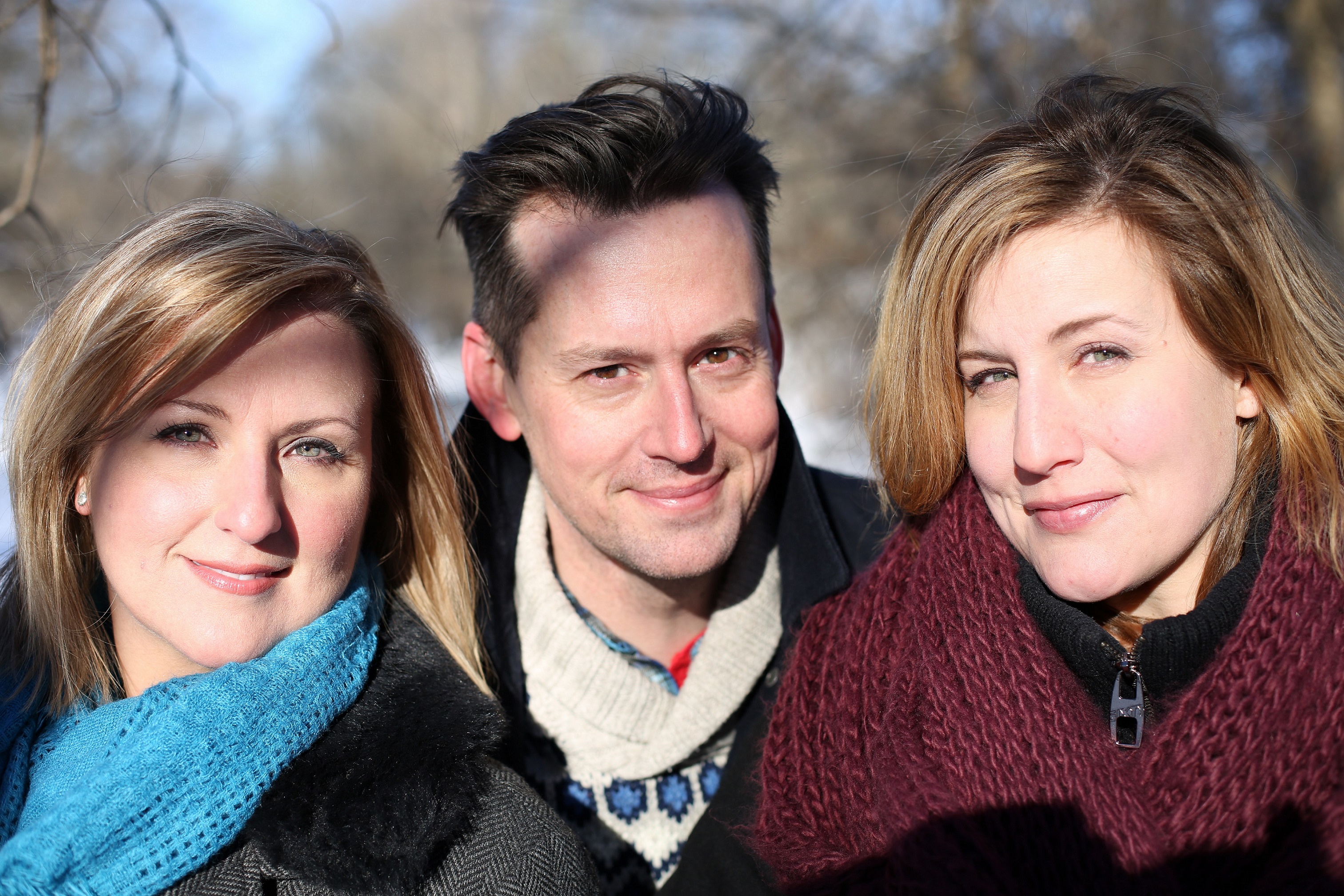 It was the trio kazoo-version of “Carol of the Bells” that completely did me in. No one can make a pretty face with their lips wrapped around a kazoo. I couldn’t even applaud, because I was doubled over with laughter.

Vocal trio Foiled Again (Allison Bazarko, Rob Lindley and Anne Sheridan Smith) have crafted their annual holiday show into an homage to the television Christmas specials that aired from the fifties into the seventies. A zanier version of the Lennon Sisters-minus-one, they keep the evening light and mostly family-friendly, with the sort of gentle musical stylings, comic sketches and variety songs that kept baby boomers and their children checking the dates and times of their favorite shows twice to make sure they didn’t miss these events, pre-TiVo. Special instrumental soloists are highlighted, and every “sister” has a vocal solo, with repeated “step-outs” within numbers, one singer carrying the song with the other two crooning perfect oohs and aahs in the background. Beginning with a fizzy version of Irving Berlin’s “Got My Love to Keep Me Warm,” the trio launches “Jing-a-Ling, Jing-a-Ling” when someone helps Bazarko find some bells to shake.

Continuing to chat with the audience and astonish with their arrangements, the trio singingly trips their way through tunes as varied as Joni Mitchell’s “Urge for Going,” and medleys of more classical carols such as “Love Came Down” and “In the Bleak Midwinter.”

Bazarko (who is happily responsible for most of the vocal arrangements the trio performs) howls out Charles Brown’s “Merry Christmas Baby.” Lindley and Bazarko don ridiculously wonderful sombreros, and caution each other and the audience about the perils of last-minute holiday shopping, telling of a legend of just what could land under your tree if you hold off too long to choose your presents. Smith leaps back into the fray with “Chia Pet,” wearing a curly green clown wig, and still managing to project wholesomeness, she doesn’t miss a double entendre, finishing the song off with the most operatic moments of the night.

With her red-red hair and her Christmas-red outfit, special guest star Meghan “Big Red” Murphy brought the Jimmy Durante to the party with her high-voltage, boozy-broad cabaret-character on the night I attended (guest star Miriam Plotkin will be on hand to add her Hanukkah parodies for the final performance next week). Opening kvetching about the ickiness of being single on Christmas, she offered a blousy, rocking answer to the problem with “Single, Mingle Jingle.” Some of the lyrics meant absolutely nothing to me, but just when I thought I had hold of her shtick, Murphy slimmed her persona and her voice down and, accompanied on guitar by John Francisco, brought a tear to the night with Francisco’s composition, “It’s Just Not Christmas.” Just like Jimmy, Murphy can make you laugh one minute, then turn on a dime and make you cry.

But the heart of the evening was Foiled Again’s music-making, where you can hear that these three pros have performed together for fifteen years. It would seem that these three voices wouldn’t naturally blend. Lindley’s choirboy tenor, Smith’s bright soprano, and the smoky voice of Bazarko just don’t sound like a match. But Lindley’s soaring voice can growl and holler, Smith has a terrific chest voice, knows exactly when to shift out of it, and owns a great belt, and Bazarko’s voice isn’t easily characterized—the smoke goes all the way down, and then all the way back up, a shot of flame piercing through at her whim.

With Smith singing “lead,” and Lindley and Bazarko trading off the alto parts, somehow it all falls magically into place; they create a sound that would make you swear they were all hatched in the same nest. If every singing ensemble matched their vowels and consonants with such finesse, the world would be a better place; every word was crystal clear. The crescendos and decrescendos were always perfectly synched, as was every moment of either straight-tone or vibrato, or the move from one to the other. As the trio soared up for one big ending, I actually could see that their soft palates were lifting for the high note at exactly the same speed.

There isn’t a better musical director/pianist in town than Doug Peck, and he delivers the goods and more. Peck knows exactly when to support, when to shine, and when to nearly disappear. This is the kind of musical diplomacy, coupled with great technique and sensitivity, that demands a high ticket price in the classical concert arena; Peck elevates every event he plays. Gavin Kirk’s guitar is a welcome addition, and Kirk is also an expert at laying back, and then laying it down.

All the way from “Winter Wonderland” to “White Christmas,” (I’m not going to spoil it for you by describing the improvisational modern dance that nearly stopped Bazarko’s singing of a Rosemary Clooney classic during that medley), this show will really put you in the holiday spirit. Just when I was thinking that the show had everything except my favorite holiday song, “Carol of the Bells,” out came those kazoos. (Aaron Hunt)