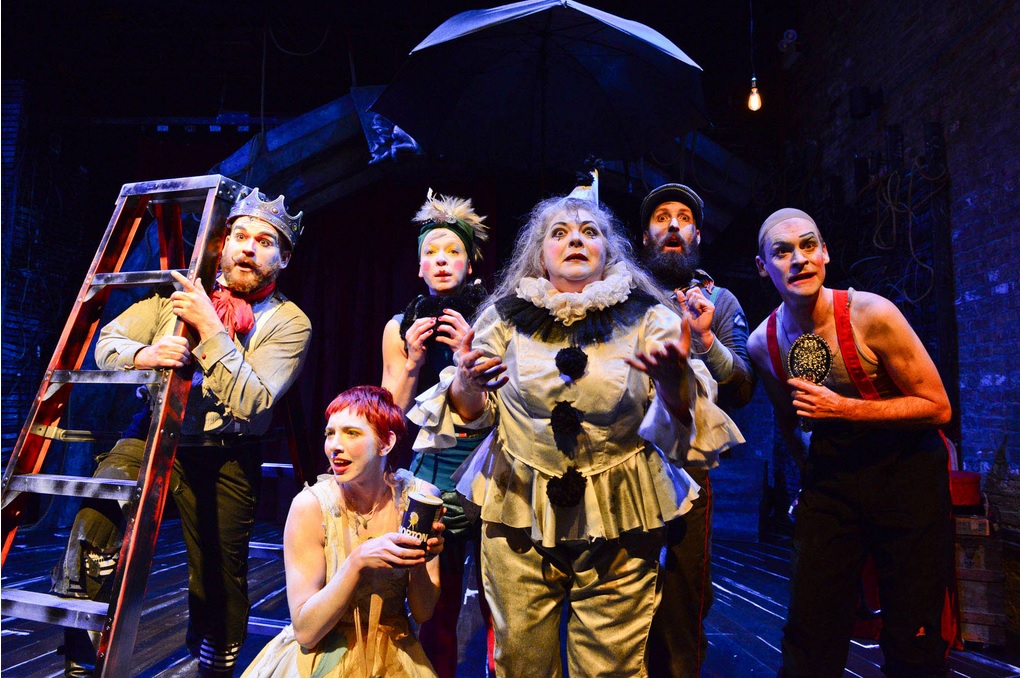 I must confess that I came to this year’s production of The Ruffians’ “Burning Bluebeard” as an in-the-tank fan. Since seeing it last year, any conversation I have had concerning the show has either consisted of either exchanging yips of adulation with fellow fans (which consisted of anyone who saw the show) or just yelling “I don’t care what you have to do just see it!” to anyone who had not. Of course there was always the chance, however small, that the show would get terrible in the intervening year. Fortunately this is not the case. With one small exception, “Burning Bluebeard” is the same as it ever was: a devastatingly funny, singing and dancing and flying and lip-synching apology for the famous Iroquois Theatre fire that claimed the lives of 600 Chicagoans in 1903.

Describing the plot of the show is a bit like describing the plot of the pantomime “Mr. Bluebeard” that was being performed when the theater went up: it’s tricky because the plot isn’t really the point. The show is presented to us by the ghosts of the “Mr. Bluebeard” cast and crew. They want to perform the show again, and this time to get it right; “Get it right” in this case meaning “to not burn the audience to death.” It was a special effect for moonlight at the beginning of Act Two that began the blaze, and as the moment grows ever closer so does their anxiety that this time will be just like all the others. Throughout the show, each character fills us in on their own back story as well as their role in the events of the fire itself. They feel a great deal of guilt at their actions and would really like to simply put on a good show for us: something that would make us happy. But to say that the show has a “plot” is really a misnomer because it doesn’t so much have a plot as it has a dramatic arc. All the action moves closer and closer to the moment of the fire, but no one’s embarking on the Hero’s Journey here. Instead, the script—written by Jay Torrence, who also performs—mimics the pantomime form of “Mr. Bluebeard” with frequent breaks for music and dance numbers, clown shows, etc. The rhythm is that of a dream, one that starts as a pleasant, laugh-filled lark and ends in full nightmare mode.

Director Halena Kays corrals all these different elements and gives the show a pace and a focus that sharpens its edges. Even the show’s most manic, wackadoo moments never feel out of control. The momentum is tightly reigned in, which is important to the ever-mounting sense of doom. Sound designer Mike Tutaj deserves a whole bucket of kudos for his rich layered soundscape. The fairytale strings of the score nail the innocent kind of wonder that the child audience of “Mr. Bluebeard” must have felt. This gives way later on to something that—no spoilers—I am going to simply refer to as “the most effective and singularly terrifying sound cue I have ever heard period.”

While the returning cast members are uniformly excellent, I was especially struck this time by Leah Urzendowski as the aerialist Nellie Reed. Her performance is at once so muscular and yet incredibly fragile. Urzendowski’s bright smile and her shining, hopeful gaze tragically embody exactly what was lost in the Iroquois fire.

The one small exception that I mentioned earlier comes in the loss of original cast member Dean Evans as the sinister Fancy Clown. The character is the pessimistic, bordering-on-Mephistophelean counterpoint to Nellie Reed’s cheery, naïve optimism: an important signifier of the doom that awaits them. Pam Chermansky, who takes on the role in this new production, is a very fine clown and manages to infuse everything she does with the appropriate levels of diffidence. It’s not that she detracts from the show, but her performance served as a startling reminder of all that Evans added. (It helps when an actor can create the role and have it tailor-made to fit their talents.) Evans—who is also well known for his “Honeybuns” character—brought a strange magnetism that few actors could properly replicate. The best I can come up with is “ominously sultry, pansexual Patrick Stewart.” Chermansky is good, but those who saw previous productions will miss Evans’ particular, peculiar je ne sais quoi.

“Burning Bluebeard” ends with an apology: for the fire, for the lives lost, for the mistakes that were made along the way. It is a show that is ultimately quite humble about the limited scope of what a piece of art can do when faced with a real, all-consuming tragedy. And yet it’s still funny that this show of all shows is the one that ends with an apology. Kays, Torrence, the cast, the crew and really everyone involved with the making of this show have nothing to apologize for. Together they have created one of the most daring theatrical experiences of the past decade in Chicago. And maybe that’s why the apology rings so true. “Burning Bluebeard” itself has no reason to apologize. That’s why we listen when it does. (Alex Huntsberger)