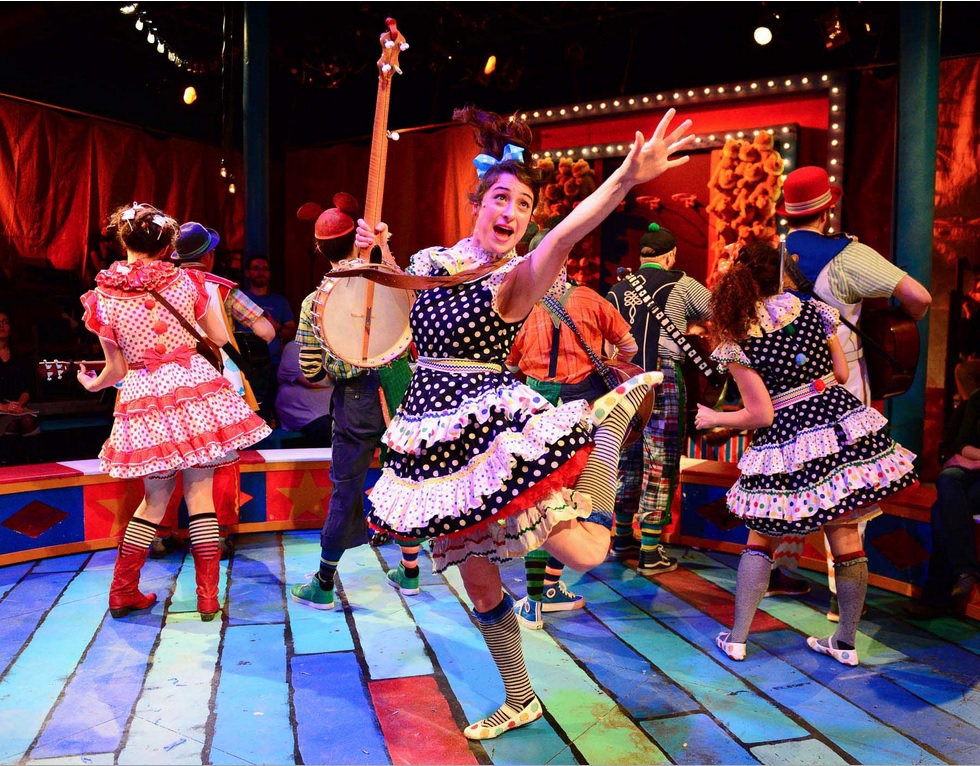 The problem that any company encounters when producing “The Mikado” is—to put it bluntly—it’s kinda sorta maybe pretty undeniably racist. And as it is a show set in Japan that was written by a pair of middle-aged British guys during the height of the Victorian Empire—neither of whom had ever been to Japan—its racial insensitivity is unsurprising. Despite all of this, “The Mikado” has not only managed to survive, but has downright thrived in the century-plus since its inception. It has done so because from the music to the lyrics to the book, the show is a fantastic piece of musical comedy. And yet, in production after production, there are still those moments where audiences squirm in their seats and look askance. Both theater artists and audiences have trouble reconciling their desire for Gilbert and Sullivan’s masterful artistry with the fact that they then have to forgive Gilbert and Sullivan’s stupid, ill-informed racism. It’s a pickle for sure.

Thankfully Sean Graney has rolled into town with his patented pickle-solving machine. Having made a career as a kind of theatrical necromancer, taking dead classical texts and reviving them to make them dance anew, Graney is perfectly suited to the task. And in the end, the answer was deceptively simple: Graney got rid of the racism by just kind of ignoring it. He took the show, which is currently running as a part of The Hypocrites “Gilbert and Sullivan Rep,” and he set it in a circus. There are polka-dot dresses, red-banded stockings and bright-green suspenders by the dozen with nary a kimono in sight. Additionally, he took Gilbert and Sullivan’s ornate, occasionally Orientalist score and reconstructed it for a motley assortment of guitars, accordions and banjos. Other than occasional mentions that the story is set in Japan, one would never know that the characters were meant to be a British person’s idea of a Japanese person. Instead they seem like what they really are: a British person’s idea of another, much sillier British person. I have no idea if this was Graney’s idea when he set out to adapt the piece, but it works.

Graney’s “Mikado” is set, like many of his other shows, in a wild, rowdy promenade. Actors stride purposefully through crowds of audience members who scramble out of the way like flocks of pigeons taking flight. The freewheeling chaos of Graney’s staging, in tandem with the goofy, fun energy brought by the cast, do much to make Gilbert and Sullivan feel fresh again. In particular, Shawn Pfautsch as the lovestruck Nanki Poo, Emily Casey as his best beloved Yum-Yum and Matt Kahler as the bureaucrat’s bureaucrat Poobah all embody the cheery, go-for-broke tomfoolery that characterizes the proceedings. It also helps that the show clocks in at ninety minutes, never overstaying its welcome.

For those who missed Graney’s “Mikado” the first two times it was in town, now is a good time to go. As opposed to “H.M.S. Pinafore,” which is a new show and can sometimes feel overly manic, “The Mikado” has a calm, self-assured swagger that allows it to thread the needle with ease. And for those who have never seen “The Mikado” before in any form, I highly suggest you go out and see it. It’s probably the only time you’ll be able to take it in without also feeling a slight pit in your stomach. (Alex Huntsberger)