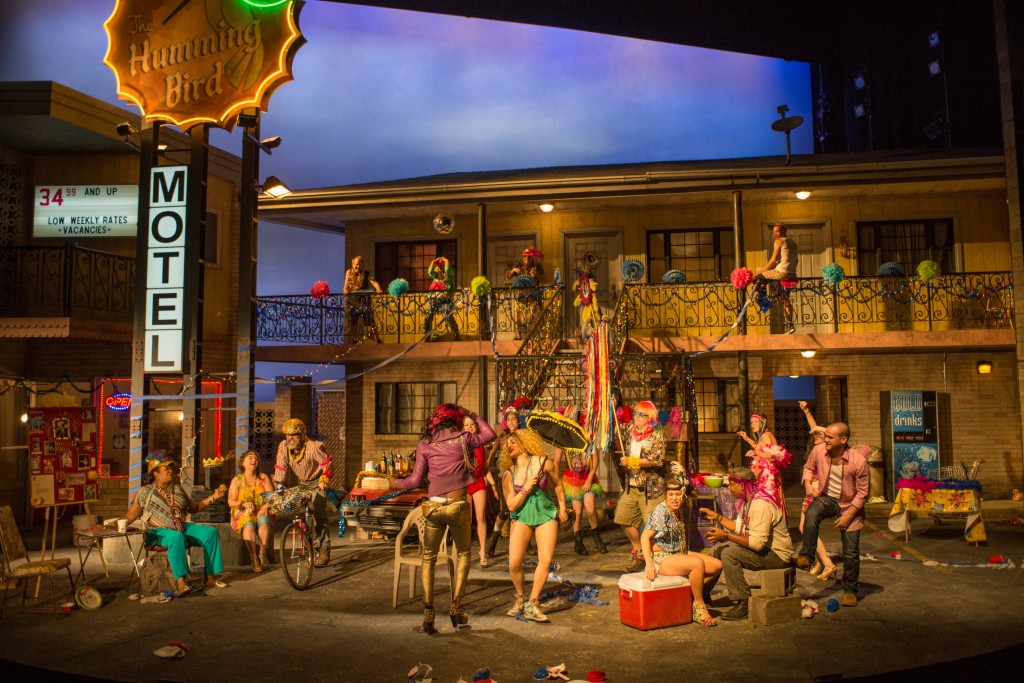 This twenty-three-person, epic-scale panorama of New Orleans down-and-outers is echt Steppenwolf, overflowing with all that’s best and worst about Chicago’s signature theater company. Playwright Lisa D’Amour’s slice-of-life naturalism harks back to the troupe’s salad days, when its kinetic, sometimes scenery-chewing productions of Lanford Wilson’s “Balm in Gilead” and “Hot L Baltimore” put the ragtag band from ISU on the map, marking them as the nation’s foremost purveyors of urban angst to suburban culture consumers. True, the setup always was a touch creepy, but the rawness of the presentation, the undeniable acting chops of the original corps (including such promising youngsters as Gary Sinise, Laurie Metcalf and John Malkovich) and the provocative quality of the scripts made for a genuine edginess and relevance.

Many of those early strengths are on display here. Director Joe Mantello, imported from New York, elicits an array of sizzling performances from his Cecil B. DeMille-sized cast. Chief among these is K. Todd Freeman’s impeccable portrayal of Sissy NaNa, the black transvestite and moral center of the tribe of survivors who live in the Hummingbird Motel, a dingy hostelry on Airline Highway, far from the touristy French Quarter. Sissy and his homies—including aging hooker and addict Tanya (Kate Buddeke), hard-up handyman Terry (Tim Edward Rhoze), beatnik poet Francis (Gordon Joseph Weiss), alcoholic property manager Wayne (Scott Jaeck) and angry stripper Krista (Caroline Neff)—have come together to honor fellow resident Miss Ruby (the formidable Judith Roberts), whose life as an exotic dancer and artiste is about to end. Attending the premature funeral is Bait Boy (played with a nuanced touch of macho malice by Stephen Louis Grush), Krista’s former lover, who left the Hummingbird and the demimonde years earlier, taking a new name, the conventional Greg. He has done well for himself, acquiring, among other things, a high-school-age, nasal-voiced stepdaughter, Zoe (Carolyn Braver). Zoe is there to observe, hoping to get an A on her sociology paper by documenting the rituals of the Hummingbird “subculture.”

The drama takes place in real time, with an occasionally plodding first act setting the scene for the sharper and hotter second half, when the riotous jazz funeral begins. It culminates in an appearance by Miss Ruby herself, whose dying benediction for her companions brings together the play’s cosmic themes of sexuality and connection. “You’re the most gorgeous group of fuck-ups I’ve ever seen,” she tells them. “Be with this moment.” Playwright D’Amour gives her dysfunctional characters a certain dignity, sometimes verging on grandiosity, as they rally around to give Miss Ruby a decent send-off. “We are not disposable, we are invaluable,” declares Tanya. “It was a long hard road to get where we are.” 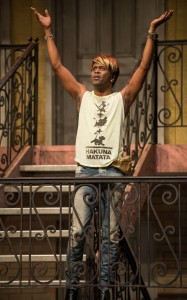 Beyond doubt, the real star of the show is Scott Pask’s astounding set, an edifice so solid and hyper-real you can almost smell the sun hitting the asphalt. An old car rots on blocks, as the neon hummingbird glows and the sign notes, “Low weekly rates, Vacancies,” perhaps referring to the residents as well as their rooms.

The production values raise a basic question: Should a play about the ravages of poverty sport a Pentagon-budget set? The stage design leaves nothing to the imagination, awing the audience without drawing it in. The essence and appeal of theater—its direct human presence and voice—is negated by the extravagance, and the ensemble never fully jells. We are reminded of what the show really is—a rehearsal for a 2015 New York run—and also what Steppenwolf has become: a Steppenstone to the world of film and TV.

In the end, the show, with its many striking moments and gorgeous details, feels like less than the sum of its parts, with little post-curtain resonance. How, one wonders, could a play about the suffering of the urban poor, written at a time of historic inequality and blatant oppression, not articulate one single political thought? Such insularity takes effort. In part, it reflects the playwright’s treatment of deprivation and despair less as a social problem than an individual choice of sordid authenticity over the beige sterility of middle-class life. This spares the audience the discomfort of reflecting on its own role in maintaining these conditions—hey, they want to live this way! We are told repeatedly not to judge—a worthy message, to be sure. But by failing to express either anger at the present moment or hope for the future, the play, like its characters, is a dead end.

In a larger sense, Steppenwolf Inc.—with its marketing strategies, its 183-person staff, its Lincoln Park real estate, its nineteen pages of benefactors (including the Gary Sinise Foundation)—is here displaying itself onstage. One does not expect the rich to rail against the arrangements that sustain their opulence. Perhaps the best one can hope for in terms of social conscience is a teary nod to the system’s roadkill, as portrayed in all their spunky, freaky, authentic glory on a stage aglitter with star turns and conspicuous consumption. “Airline Highway” confirms once again that Steppenwolf, once a humble neighborhood ensemble theater, is now a gated community. (Hugh Iglarsh)