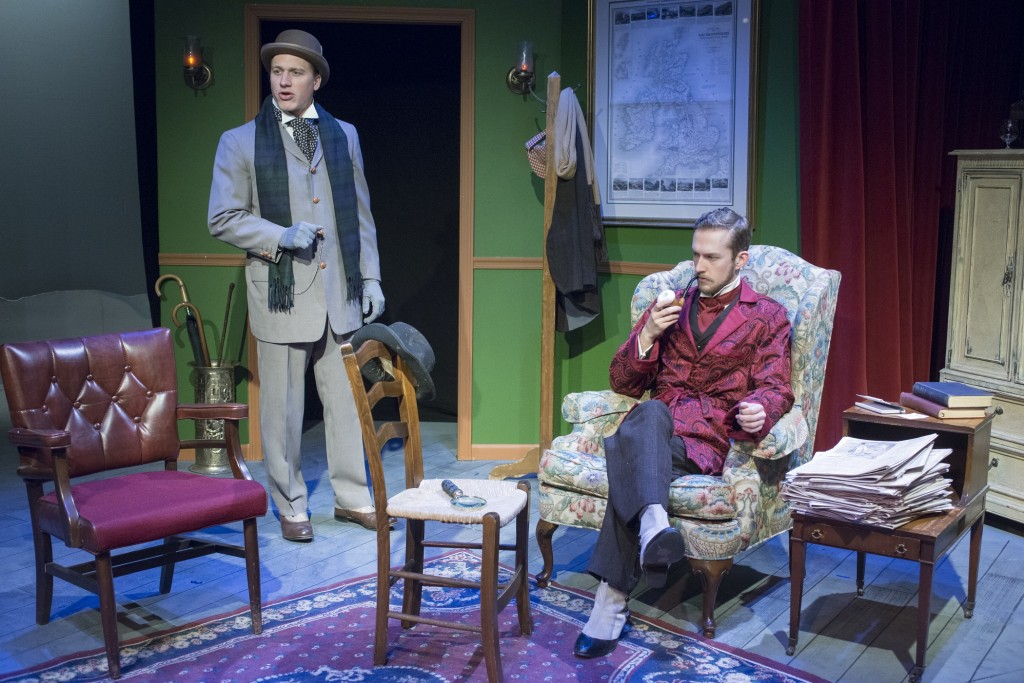 Light as down, raucous as the title bird and quick as the famous Baker Street sleuth’s brain cells, Raven Theatre’s revival of its mystery-cum-musical-cum-sing-along is a delightful way to pass a holiday-season hour.

Adapters Michael Menendian (who also directs this show with a sure, knowing hand) and John Weagly use Arthur Conan Doyle’s “The Adventure of the Blue Carbuncle” as the scaffolding of this bit of wintry whimsy, festooning it with Christmas carols, dance numbers, sound effects and gags, both wholesome and gross-out. All that’s missing for a latter-day vaudeville experience are jugglers and a trained seal. (Maybe next year.)

The plot-driving MacGuffin here is a priceless jewel, found like a Cracker Jack toy in the crop of a fat Christmas fowl. Holmes (played by Graham Emmons, who radiates a comical smugness) is on the scent, along with much-abused sidekick Watson (a sturdy if slightly touchy Damian Conrad). Literature’s most famous sadomasochistic couple delves from top to bottom of Victorian London in search of truth, justice and the aesthetic satisfaction of a puzzle solved. Along the way, we meet a series of apparently random characters, played with tongue-in-cheek earnestness and sometimes wavering accents by Matt Bartholomew, Lane Flores, Rudy Galvan, Sarah Hayes, Sophia Menendian and Symphony Sanders. Only that great brain of Holmes can connect them, thus finding pattern and moral order within the buzzing chaos of the nineteenth century’s great metropolis, which is organized around the impersonal activities of buying, selling… and stealing. This capability of Holmes, and our own continuing need to find form and meaning within the urban hubbub, accounts for the sleuth’s evergreen appeal.

Or maybe it’s just the fact that, at this point, Holmes and Watson are like family. When we witness Holmes chiding his comrade—”Watson, you are too timid in drawing your inferences”—we can’t help but chortle, hearing the deep, hidden affection beneath the habitual condescension. Wisely, adapter-director Menendian focuses on the pair’s friendship, which is what makes Holmes’ pedantry and arrogance bearable and gives the tales a comic, human touch. The humor is underscored with some fine radio-theater and silent-movie touches, such as popping bubble-wrap onstage to signal a crackling fire, and building suspense with corny but effective piano cues (courtesy of music director/choreographer/onstage accompanist Chris Logan).

Like a good detective, the play’s director and cast pursue their quarry with single-minded dedication. And in the end, they capture just the right holiday tone—sweet but never sticky. (Hugh Iglarsh)