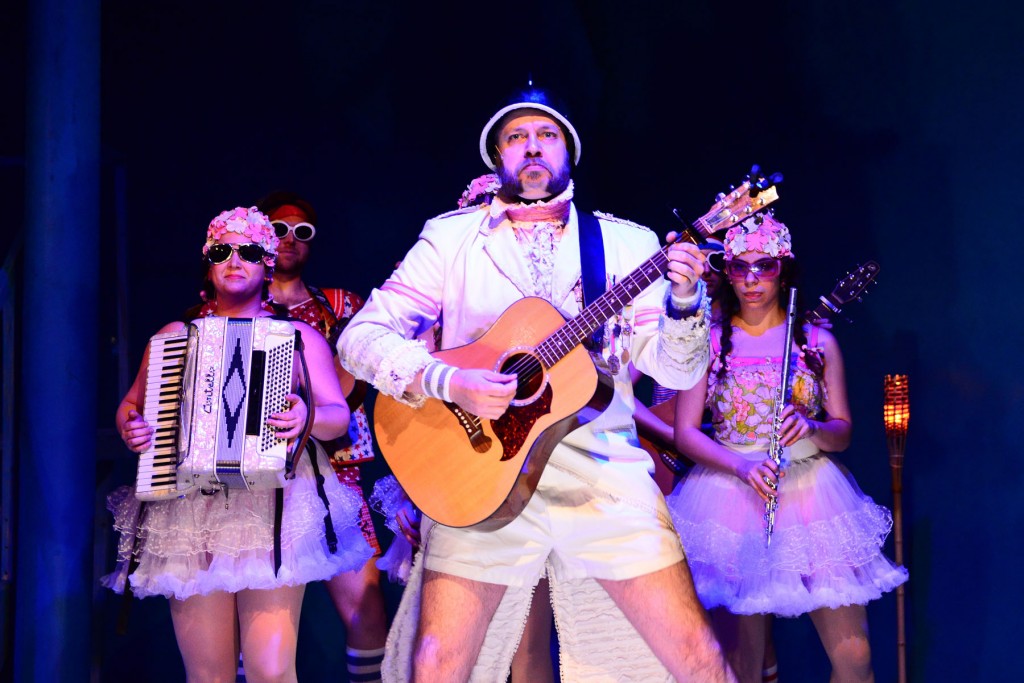 I’m not the first to say this, and I certainly won’t be the last: Go to The Hypocrites’ revival of their 2010 staging of “The Pirates of Penzance.” Don’t be put off by their unprepossessing new location. Yes, the unfinished theater still looks like what it was: a furniture-store showroom. Yes, to a first-time customer, casualness and laissez-faire seem to be the order of the day. But don’t be fooled by the atmosphere of whimsy, friendliness, anarchy and chaos that envelops you at the theater entrance. It’s all been carefully calculated to sweep your mind clean of stale preconceptions about Gilbert and Sullivan and Victorian theater.

This production of “Pirates” is as tightly and artistically controlled, as professionally faultless an affair as you will see anywhere. After much consideration, I say this categorically: artistic director Sean Graney, the man who fomented this seeming rout and disorder, is an amazing artist. There is method—and cunning, brilliant, astonishing insight—in his madness. Graney wants to convert you to his utter delight and belief in Gilbert and Sullivan as important thinkers and determined social reformers. He succeeds.

And the actors… where do these frighteningly talented people come from? They all play musical instruments—or should I say they play all musical instruments—with grace, charm and real musicality. I counted a violin, a ukulele, several acoustic guitars, flute, harmonica, clarinet, squeeze box, accordion, mandolin, washboard, xylophone (or marimba) and a hand saw. I may have missed a few, but after the first minute, I didn’t miss Sullivan’s orchestra at all.

I marveled at the split-second timing, the perfect sense of pace, the clarity of enunciation, the inspired word-play by many of the troupe on top of Gilbert’s wittiest puns and rhymes, word-play that drew continual roars of laughter from the audience. Never have I heard such delighted guffaws from a G & S audience. Experiencing this production, it is as if the original sensation “Pirates” provoked in 1880 is being re-created before our eyes.

It seems arbitrary to single anyone out given that the whole troupe consists of superb, seasoned, disciplined professionals, but Christine Stulik, playing Mabel and Ruth, caused me to drop both my jaw and my critic’s notepad in admiration of her stupendous un-comeliness and her genius for clowning. And as “the slave of duty” Frederic, Doug Pawlik puts his own Gallic twist on Gilbert’s rhymed endings. Both left me ROTFL.

See this play. Tell your friends about it. And I’m going to pay my own way to see “The Mikado” and “H.M.S. Pinafore” – both currently running in repertory with “Pirates.” Can a critic be sincerer than that? (Bill Sweetland)