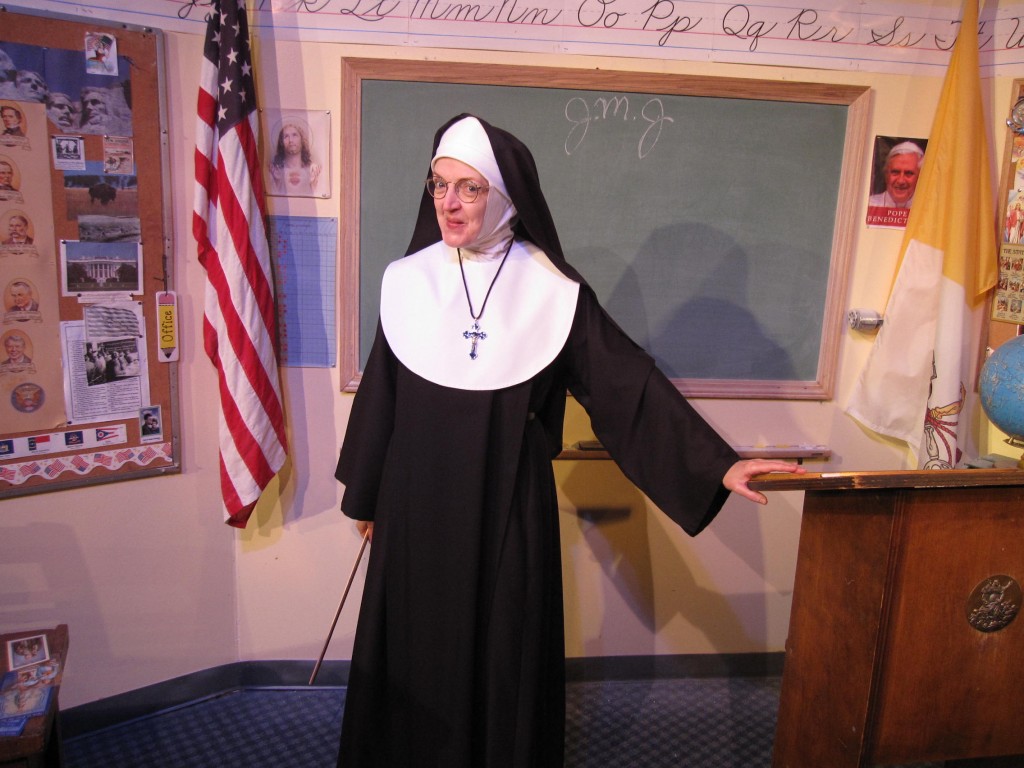 Many Catholics could use a refresher course in good old Christian beliefs. And Lord knows some facets of religion can be so ridiculous that one has to laugh. For the last twenty-one years, “Late Nite Catechism” has been faithfully helping audiences with both.

Originally conceived at Live Bait Theater in 1993 by a group that included ongoing producers Vicki Quade and Maripat Donovan, “Catechism” is now the longest-continually-running show in Chicago history. Currently, Marc Silvia and Vince Kracht direct several women in the role of the Nun in a rotating schedule.

The premise of the show is this: as usual, the Parish Priest has something better to do than teach an adult theology class. So, the Nun—being the ever-faithful, never complaining, servant of the Lord—leads it. The audience is the class. Students are rewarded for participation with holy cards, rosaries and other prizes. Likewise, students are penalized for misconduct. If someone is late, he/she is called out on his or her lack of punctuality and made to tell the rest of the class what caused the delay, ask for forgiveness and make a one-dollar donation to the Pagan Baby Fund (a.k.a. old Catholic missions to baptize babies). Funds raised here are donated to retirement funds for various orders of nuns around the world.

Mary Zentmyer, who has been in the role for more than seventeen years—and has the quick wits and cleverness to prove it—played the role of the Nun in the performance I attended. From the start, she brought the class to attention, having them stand, waiting for her instruction to be seated. In her mock grade-school classroom, complete with a chalkboard, posters of cursive letters of the alphabet and various educational materials, along with a large wooden desk, she instructed a couple sitting a little too close for her liking to save “a little room for the Holy Spirit,” and began the lesson. Zentmyer talked about the culture of Catholicism and how—like Catholic guilt—growing up in the Catholic school system can leave a lasting impression. She even displayed a chair made of broken rulers to get that point across.

Between teaching hilarious new prayers (“Hail Mary, full of Grace, help me find a parking space”), reminiscing about Catholic school, and raising funds for sisters in need, it’s not hard to see why the show is such a success. (Mary Kroeck)