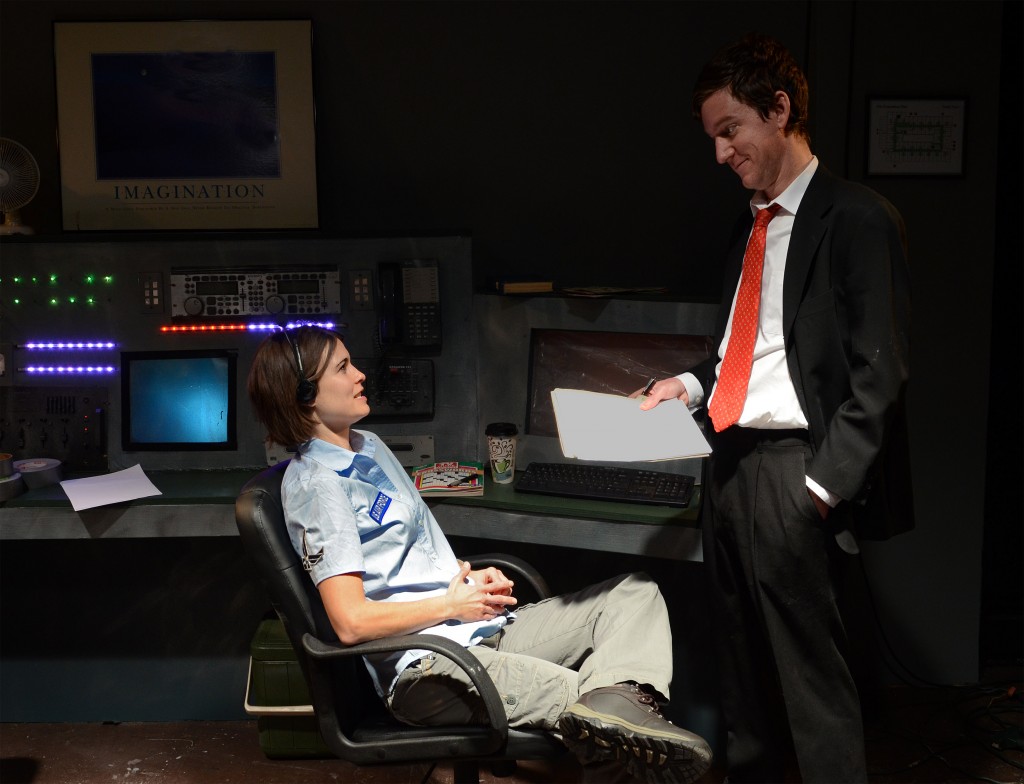 Steve J. Spencer’s “Push Button Murder” starts out as a slice-of-life play, telling the tale of two bored drone pilots on a long shift doing surveillance around the world from their remote underground bunker. Its pacing reflects their boredom. Becky (Meredith Rae Lyons) and Roy (Derek Garza) sit at aging computer consoles while determining whether to drop death from above on unsuspecting people elsewhere.

One “elsewhere” is actually just a few miles away in neighboring Pennsylvania (the bunker is located in Ohio). Stacy (portrayed fervently by Amy Johnson) is a recently laid-off teacher who through her enthusiastic support of protests has grown into a potential domestic terrorist.

As more and more drones are put in the sky, this play asks us to look at the ease with which they can be used to kill; at the moral ambiguity of killing from a distance; and the lines that blur when considering who to target and where.

In this world premiere in the side project’s tiny space, Ronan Marra’s direction keeps the tension present through staging that makes it clear that the bunker’s similarly tiny space is inescapable for those who work within it. Stephen Gawrit’s sound design, made up of a lot of low-end rumbles and droning hums, adds to the atmosphere quite effectively.

Preston (brought to life by Andrew Bailes) is a psychologist who encounters the two drone pilots and in many ways serves as a surrogate for the audience who enters with assumptions about the others that mirror our own. And he subsequently struggles with all the issues that the play raises. Bailes does a fine job in this role, especially since he spends much of the show affixed to a chair by way of duct tape.

The characters of Stacy and her husband, Mike (Ben Veatch), are harder to connect with than those in the bunker. Their scenes are more brief and the characters less developed. Their action doesn’t really gather momentum until they encounter Amber, a former student of Stacy’s, whose youthful passion and disconnection are both ably captured by Kasia Januszewski.

“Push Button Murder” is well-penned and well-performed, looking at hard issues and does so in a way that allows for laughs at times and bits of dread at others. (Christopher Kidder-Mostrom)