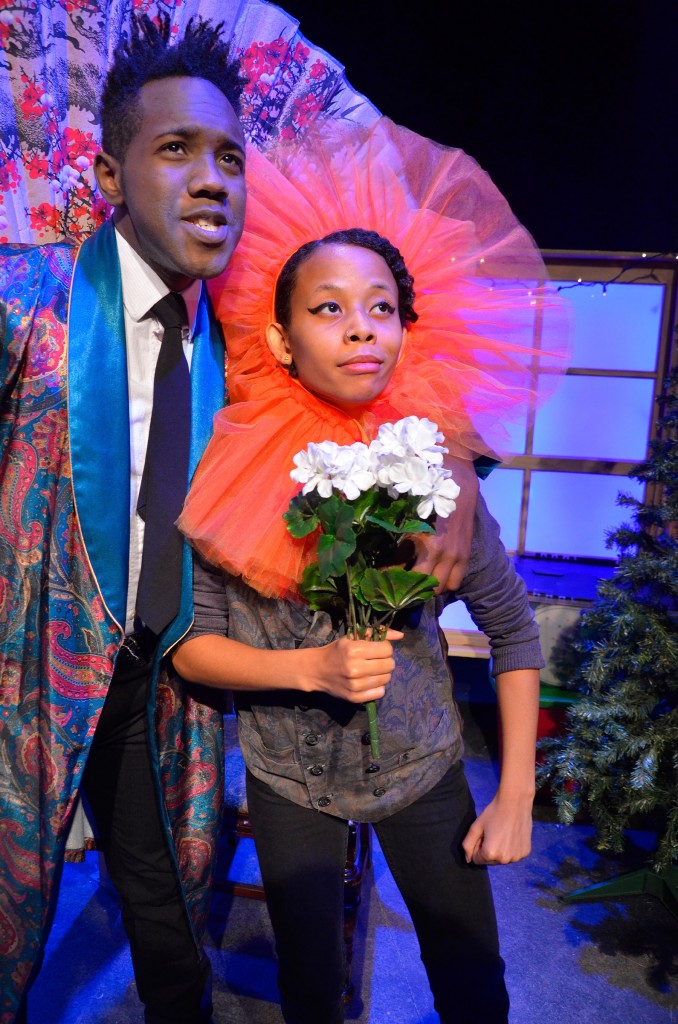 The publicity materials for “Lions in Illyria” boast that it is a “brand new comedy for the whole family, ” and Robert Kauzlaric’s new adaptation of William Shakespeare’s “Twelfth Night” lives up to the claim. While the play is part of Lifeline’s series of children’s shows that run as matinees on the weekends, it isn’t just entertainment for kids. Amanda Delheimer Dimond’s direction of this cleverly crafted script creates a world within which kids and parents alike can thoroughly revel in an hour of live theater.

The story is that of “Twelfth Night” and all the regular characters are present, save one (there’s no Malvolio). The rest of the characters are all represented through the efforts of four actors telling the story as if it were an animal tale. Mykele Callicutt is both Orsino and Sir Toby Belch. Brandi Lee is Viola (here altered to Violet) and Maria. Ryan Stajmiger portrays Sebastian, as well as Sir Andrew Aguecheek (who is the butt of the cross-gartering hijinks usually aimed at Malvolio). And Kate McDermott plays Olivia and Antonio. Each actor shifts in and out of their characters and even adopts the narrator’s voice from time to time, and it works seamlessly, never creating confusion, thanks to rapid costume changes and creative staging.

The humor within the script is smart, wicked and silly.  There’s just the right mix of puns, sibling rivalry jokes and jests about flinging poo (Antonio is a monkey, after all).  The twins that drive the tale are the titular lions, and their manes are made of tutus. Fans of the original work will appreciate that Orsino is a peacock and Sir Toby Belch is a warthog.

There is truly nothing I do not like about this show. If you have children, you should take them to it. If you are still in touch with your inner child, you should take him or her to see this.  And even if you’re a grumpy old codger with no connection to children in any way, you should go see this play. It has the fun and feisty attitude of an episode of “The Animaniacs” or the classic “Muppet Show.” It is self-aware without being meta and it makes a centuries old classic story new again.  (Christopher Kidder-Mostrom)