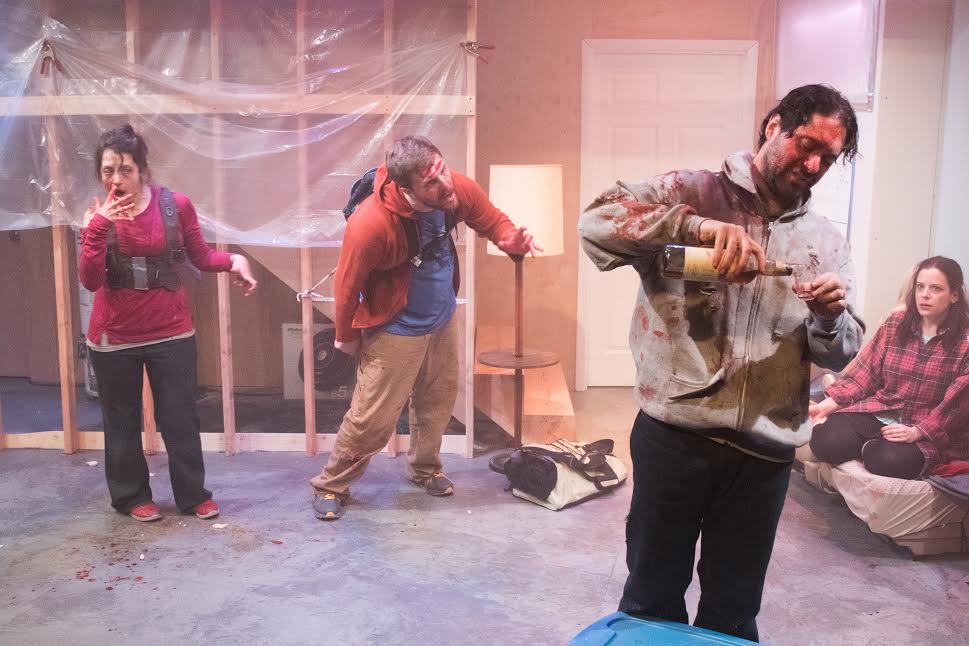 Aside from the constant presence of two very-well-made-up zombies (impressive work by costume and makeup designer Aly Renee Amidei) and an effectively creepy scene with only a flashlight for lighting, the latest offering from WildClaw Theatre uses the horror genre more as a gory vehicle for a romantic comedy-drama than as the central theme. And it pays off remarkably.

In playwright Scott T. Barsotti’s post-apocalyptic world, little exposition is wasted on the backstory of the downfall of the human race. Instead the focus is trained keenly on two couples seeking refuge. In the opening scene, Gary (Josh Zagoren) and Karen (Elizabeth Birnkrant) frantically transport their already-zombifying spouses—Molly (Krista D’Agostino) and Joe (Drew Johnson), respectively—into the relative safety of an abandoned basement (realistically realized by set designer Dan Stratton).

Infused with more comedy than any other WildClaw (or Barsotti) show I’ve seen, “Revenants” explores the evolving relationship between Gary and Karen as they necessarily grow closer while working to survive in a decaying world, with their spouses tied up nearby looking on, moaning and decomposing before their eyes. Impressively, D’Agostino nearly steals the show, despite portraying a mindless walking corpse for the majority of the ninety-minute running time—every twitching choice she makes feels inspired.

Director Brad Akin mines the material for almost every ounce of comedy it has to offer, though he does so at the cost of the inherent suspense that should also be on display. The performances by Zagoren and Birnkrant, while certainly competent, don’t feel as tense as the situation requires, and when the drama really breaks free in the second half, this duo should certainly have more at stake (both physically and psychologically) than is currently on display.

Still, with the mainstreamification of zombies in various media over the last several years (“The Walking Dead” on television, “Pride and Prejudice and Zombies” and “World War Z” in literature and film), “The Revenants” stands as an altogether entertaining entry into the theatrical zombie canon that even non-horror enthusiasts can enjoy. It’s not a bad romantic dramedy either. (Zach Freeman)