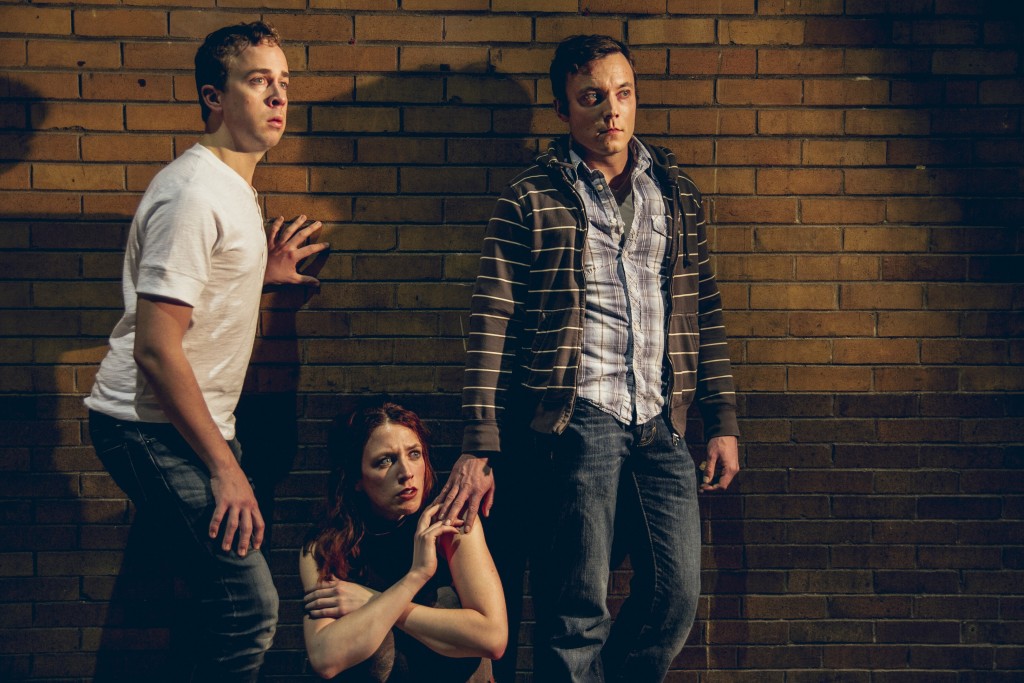 A flop is a painful thing for everyone concerned, but as with all adversity, there are lessons to be learned. So it is with this ten-car pileup of a play presented by the newborn Cor Theatre.

The story, such as it is, involves three twenty-somethings—insecure Nate (Nick Mikula), his unsettled wife Sarah (Mallory Nees) and the troubled Mark (Will Von Vogt)—who are kidnapped and subjected to absurd and sadistic psychological manipulation before their implausible rescue by Mark’s lover, Victor (Ruben Adorno). Their ordeal is not without potential relevance in the age of Gitmo and Bagram. But here it’s all just an overblown campfire story, given giggle-worthy solemnity by the narration of the Bird Statue (Scottie Caldwell), who recites sad monodies while staring soulfully at the audience.

“A Map of Virtue” is billed as a horror story, but what’s scary is that the play won an Obie Award in 2012, demonstrating the frightening sterility of today’s drama scene. Its only virtue is brevity, clocking in at seventy-five intermission-less minutes, but feeling like more. The play’s varied motifs—birds, symmetry, sexual abuse, guilt—flitter through the script, but never quite roost. Perhaps the true theme here is alienation, which oozes from the bored, numbed characters. However, the script is too thin and wispy to articulate any real comment on the emptiness it both portrays and embodies.

Another lesson is to loosen up while keeping it real. Director Tosha Fowler does everything in her power to TV-ize the play, extracting a soap-opera earnestness from her cast while denying them room to move and breathe. The show totters on the edge of self-parody as the stiff, personality-free characters utter such DOA lines as “I think it is important to own our behavior,” and the florid background music swells.

Which brings us to the final lesson: Learn to move on. Every dramatic wreck is soon cleared away, leaving room for new plays that have something to say and that bring together intellect and emotion. I wish Cor Theatre well on its journey toward artistic maturity. The good news is that it has nowhere to go but up. (Hugh Iglarsh)