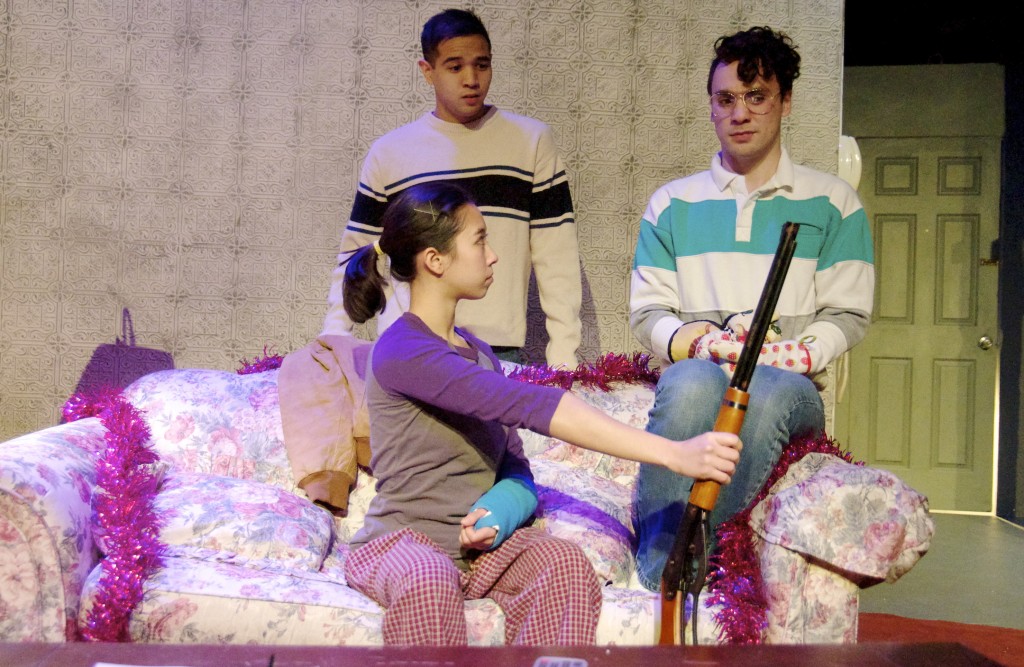 A. Rey Pamatmat’s luminous (and new-ish) play “Edith Can Shoot Things And Hit Them” has a spirit similar to the eighties classic “Stand By Me,” only with one crucial difference. In that film, the young boys strike out into the wilderness searching for adventure, rejecting the adult-made world in which their daily lives abide. In “Edith,” it is the adult world that has rejected the children, and the wilderness that surrounds them echoes not with limitless possibility but a vast, aching loneliness.

Well maybe not so much for Edith. As played by Aurora Adachi-Winter in First Floor Theater’s Chicago premiere, she is every bit the hot-headed adventurer. She may only be twelve, but the threat made in the play’s title is not an idle one. It is her brother, Kenny (Kevin Matthew Reyes), who at sixteen already has to carry the burden of worrying: about their budget, their food, their gas usage and, of course, whether he can carry on seeing his new boyfriend Benji (Luke Michael Grimes) without Benji’s paranoid, homophobic mother catching on. Having been abandoned by their father in the wake of their mother’s death—infrequent bank deposits serve as his only form of contact—Kenny and Edith have been forced toward the yawning maw of adulthood too early. The play follows their attempts to create a new family from the ashes of their old one.

The performances in director Hutch Pimentel’s production are strong, but they are oftentimes at odds with one another, especially in Act One. Adachi-Winter strikes a perfect chord between heightened wonder and regular old peevishness throughout, whereas Reyes often underplays his moments while Grimes overplays his. These clashing styles make for many moments when it feels as though the three actors are in different plays. Grimes in particular is wonderful in Benji’s more serious moments but can push the comedic ones into broad farce.

Things smooth out in Act Two as the adult world starts to close in on the trio—like the trap that it ultimately is. Nagging quibbles fall away and are replaced by genuine concern for the fates of these beautifully drawn characters. As Pamatmat has conceived of them they are complex, occasionally infuriating and willfully naïve, but they are also good. And not just fundamentally good but all-over actual good, a surprisingly rare quality that First Floor’s production embodies superbly. (Alex Huntsberger)