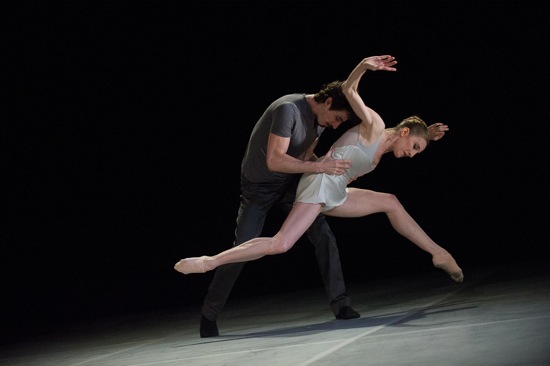 Two years ago, in an extended interview with Alejandro Cerrudo about the premiere of his first evening-length work, the conversation momentarily turned to a side project he had been invited to choreograph for. The Chicago performance wasn’t yet announced so Cerrudo asked me to keep it quiet, but the resident choreographer for Hubbard Street couldn’t help but gush a little with excitement; he was clearly starstruck. “She’s so incredibly nice and down to earth,” he said. “And, I mean, she’s Wendy Whelan.”

In an art form in which dancers fill bio blurbs and define careers by the names of choreographers whose pieces they’ve performed, Wendy Whelan, principal dancer with the New York City Ballet for three decades, has distinguished herself as a legend, an artist sought by leading choreographers as both muse and collaborator—most notably by the now-famous Christopher Wheeldon, whose career arcs through a dozen works made with Whelan as his prima. She retired from the City Ballet last fall, having originated countless roles that have become staples for high-profile companies around the globe, but Whelan, now forty-seven, is far from retiring from the stage. The dancer hailed as having perfected Balanchine is stepping away from the strong lines and rigid control of ballet to a new challenge: turning in her pointe shoes for the weighted, momentum-driven, barefoot world of contemporary/modern dance. Whelan invited four contemporary choreographers—Kyle Abraham, Joshua Beamish, Brian Brooks and Cerrudo—to each choreograph and perform a duet with her in a program entitled “Restless Creature.” The show debuted at Jacob’s Pillow Dance Festival August 2013 to warm reviews and was booked to play the Harris in March of 2014, but a post-hip surgery injury forced Whelan to reschedule for this month. Now the one-night-only performance approaches and I confess to feeling a little like I’ve been waiting to see this show for a couple of years.

And it’s not only to view Cerrudo’s latest creation (and see him dance his own choreography… something he pretty much never does anymore). Several mature dancers have made the transition from classical ballet to contemporary forms—Whelan has cited Baryshnikov as an inspiration in other interviews—yet seeing a master place themselves in the position of student is a rare and powerful thing. Each of these choreographers presented real challenges to Whelan, be it Abraham’s deeply integrated, cascading sense of kinetics in “The Serpent and the Smoke,” Cerrudo’s fluid and winding partnering in “Ego et Tu,” Beamish’s razor-quick, eclectic vocabulary in “Waltz Epoca,” or Brooks’ gravity-laden, off-center (and, from video clips, gorgeously tender) “First Fall.” Whelan, still curious, still restless, is exploring new worlds and seeking new ways to move. The curiosity is infectious. (Sharon Hoyer)