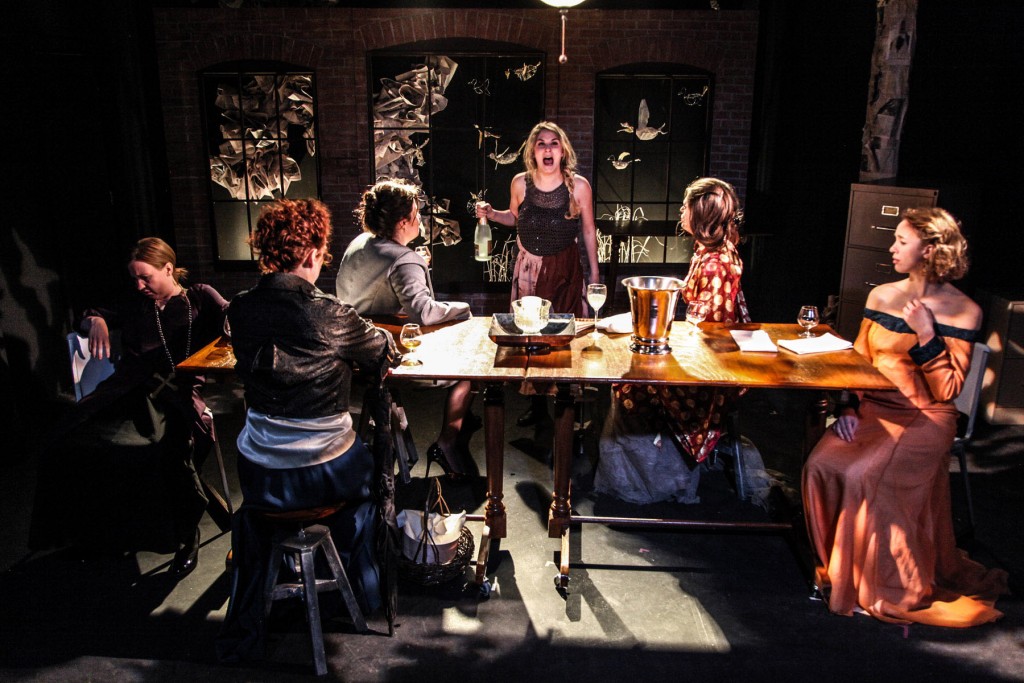 “Top Girls,” a 1982 play by the prolific dramatist Caryl Churchill, begins with Marlene (Patricia Lavery) preparing to celebrate her promotion at the Top Girls employment agency in London with six unlikely dinner guests. These women include nineteenth-century explorer Isabella Bird (Meg Elliott), concubine to the Emperor of Japan in the thirteenth century and later Buddhist nun Lady Nijo (Lana Smithner), figure from a Bruegel painting Dull Gret (Kelsey Phillips), Pope Joan (Pamela Mae Davis)—a woman who disguised herself as a man and became pope—and Patient Griselda (Kate Marie Smith), a character based on a character in “The Canterbury Tales.”

While Churchill has included all the right ingredients to make this a truly powerful scene, the limitations in The Arc Theatre’s production don’t serve it rightfully. At the dinner party, all the women talk at the same time, which Churchill intended to be a sort of one-upmanship, where the women dominate the conversation with tales of how their lives and struggles are more interesting than the next. Here however, it just feels like burdensome clamor, with no one trying to truly dominate.

Additionally, Lavery’s Marlene is too kind and soft-spoken for us to really see her as an ambitious woman on a mission to get to the top with very little patience for low achievers. For example, she delivers condescending lines while interviewing Jeanine (Robyn Novak)—a character unworried about furthering her career and simply saving up for her wedding—yet it comes off as casual conversation. Nor does she exude any conviction in her argument with her sister Joyce (Natalie Sallee) about her reasons for escaping poverty to create a better life for herself.

There are a few bright spots in this production: Davis is incredibly engaging as both Pope Joan and Louise, and Cailin Short’s use of newspaper as a part of the set design is both clever and inventive. Unfortunately, they are not enough to sustain an audience’s interest for two hours. (Loy Webb).

The Arc Theatre at The Den Theatre, 1333 North Milwaukee, arctheatrechicago.org, $20. Through February 8.