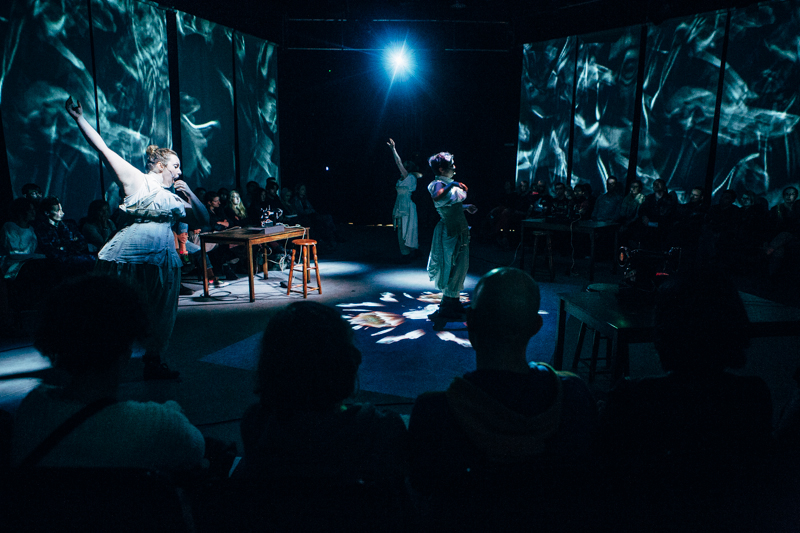 Erica Mott’s love for performance blossomed from her work in international development and foreign diplomacy. “I was working on microeconomics and microlending in Latin America, ” she says. “I found women at the forefront of both cultural and economic production. But cultural production was the driver to bringing people together. It’s what led me back to the arts.”

This background speaks to the intellectual rigor Mott applies to crafting performances; questions around politics, gender and the female body drive Mott’s work, including her most recent and ambitious vision, “3 Singers”—the title refers to both the cast members and three vintage sewing machines with which they share the stage. Mott collaborated with an impressive team to pull together sound design, video work, voice coaching and dramaturgy into a “technopera” that explores the struggle for rights of female textile workers in the pre-Civil War era, the Industrial Revolution and the present day. When asked about the subject, Mott says, “As dancers we constantly ask questions about the body. But every day I wake up and don’t ask questions about this thing I put on my body that passed through the hands of someone else. I got curious about this world that is invisible. And women are often invisible.”

After a year of research, Mott invited composer and sound designer Ryan Ingebritsen, vocal coach Fides Krucker, video designer John Boesche, scenic designer Leigh Breslau, and Ginger Farley as dramaturge to build a layered experience around several overlapping themes: migration, catastrophe, voice. Mott explains, “There is no one story but several parallel structures. We created a series of song spirals; each has a central period but they circle back to each other. They touch on topics, looking at things like migration and catastrophe. For instances of catastrophe, in the pre-Civil War era, the lynching of cotton workers and the slave trade. In the Industrial Revolution, catastrophes like safety violations and factory fires in which 150 women would be trapped and killed. And now looking at factory fires and collapse in which thousands of workers have been killed.” The theme of migration is similarly explored: antebellum bird migration, with each singer assigned a particular birdsong, in the Industrial Revolution, worker migration, and in the present day, the migration of corporations to cheap labor. Voice is explored through birdsong, protest songs that created solidarity across language barriers, and the fragmented multitude of voices across social media that lead social rights movements today.

Throughout these dense triplets of themes, performers, and time periods are woven the technical elements of the show. Ingebritsen transformed the sewing machines into musical instruments; the pulse of each machine’s thread arm is captured as digital information that can then create similar pulses in the singers’ voices, dictate where sound is produced in the room, or manipulate video. Video, stage design (by the scenic designer for Millennium Park) and sound are all structured to gradually envelop the audience in an immersive, operatic experience.

“3 Singers” will be performed at the new National Museum of Health + Medicine, and visitors will have the opportunity to view Mott’s research as well as connect with contemporary activist organizations. The museum is even helping develop a free mobile app for the exhibition. Mott confessed to feeling a little nervous about putting all her research material up as a month-long exhibition; she was concerned about overwhelming visitors with too much information. But the richness of the subject and the depth of the research clearly merit context, reflection and discussion beyond the two-hour performance. (Sharon Hoyer)