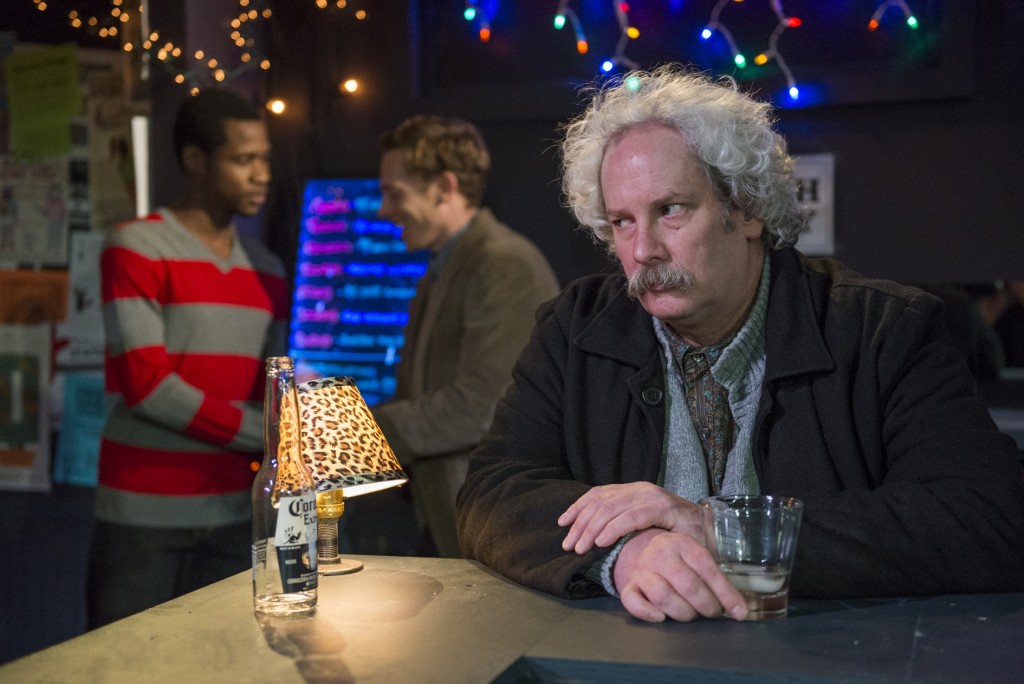 At first blush a play that is set at Christmastime may seem misplaced when presented a month later, but Grant James Varjas’ play about grief in a gay bar, though by turns funny, touching and painful, is not holiday fare. John Holt’s set, combined with Arianna Soloway’s props, turns the entirety of A Red Orchid Theatre’s Old Town space into a truly believable dive bar that was once the center of the gay community’s evening activities, but has seen better days as its clientele has aged.

The bartender, Jeffrey (Dominique Worsley), holds together the bar, its patrons, and the play itself. Worsley buzzes about and is constantly in motion, making drinks, cleaning the bar, and never for a moment being an actor in a role. He is totally immersed in the character of a man who makes drinks, listens to others, and enforces the rules of the house when necessary.

While Jeffrey is the center of this play’s world, Mark (Steve Haggard) is the focus of the story’s main action. He is younger than the rest of the bar’s regulars, and so his presence is out of place. Haggard’s portrayal of a man who turns to drink to connect with the memories of his dead lover are often priceless. He plays drunk well and, more importantly, honestly. He doesn’t stagger about with loud bombast, instead becoming a rambler with little focus, treading a line of sadness and humor that is completely enthralling.

Shade Murray’s direction is subtle and yet strong. In the script some characters are more fully developed than others, but through carefully guided moments that consist of shared looks and silent exchanges, Murray’s cast fleshes them all out into real folks who we’ve all likely encountered before.  And we feel for them all deeply as they struggle with the burden of being survivors. (Christopher Kidder-Mostrom)