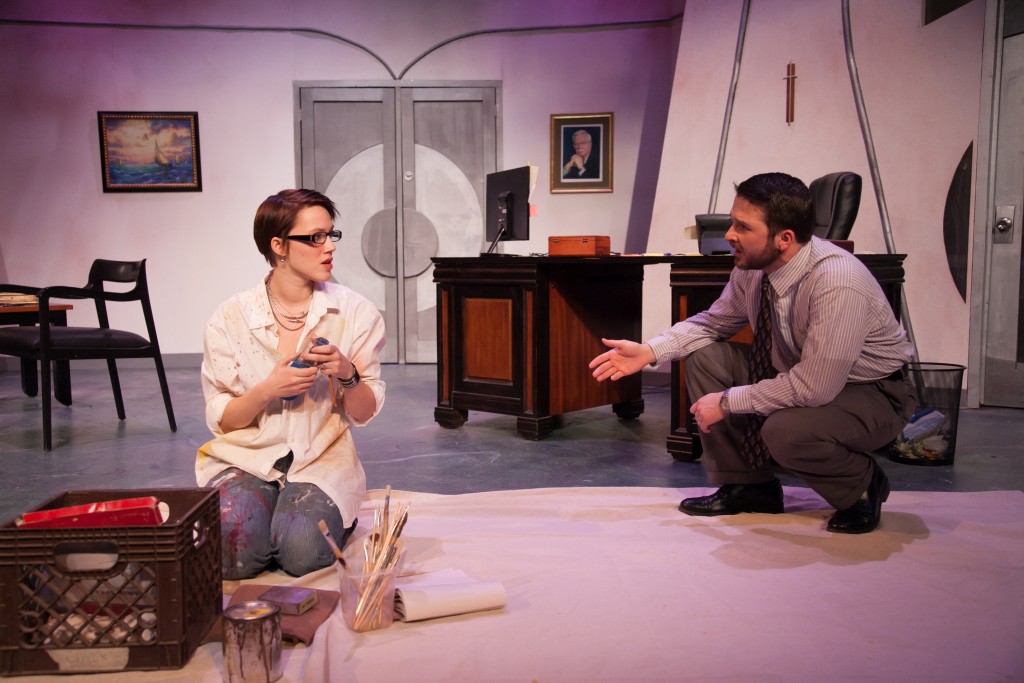 When a new play is tackling a current social issue, for instance the tensions between atheists, gays and right-wing mega-churches, there is always a difficult line to walk between arguing and conflict. Watching two characters work against one another because they have contradicting needs and desires is conflict. Watching two characters debate each other’s contradicting points of view is arguing. The former is the very essence of drama, the latter is ancillary. One is “Hamlet,” the other is CNN’s “Crossfire.”

Playwright Penny Penniston’s “Keys of the Kingdom,” currently receiving its world premiere from Stage Left Theatre, doesn’t quite walk the line closely enough. Or really, it spends its first half firmly on the arguing side of the line before hoisting itself over onto the conflict side in its second. And once it’s over the line, it stays there: Act Two is compelling, empathetic and goosebumpling. However, as Act Two is only about half as long as Act One, the journey to get there is rather arduous.

The play kicks off when a right-wing mega-preacher, Ed (Don Bender), is divinely inspired to hire Irene Hoff (Kate Black-Spence), a lesbian atheist New York artist, to paint the ceiling of his office. Despite a hefty paycheck and full artistic control, Irene struggles for inspiration, so she spends most of her time on the job conversing with—and provoking—Ed’s born-again assistant, Arthur (Brian Plocharczyk), a recovering addict whose wife has an unplanned pregnancy. Things pretty much play out along established partisan lines until a single, unexpected event (that should not and shall not be spoiled here) scrambles them up a bit.

The cast, under the direction of Greg Werstler, is strong all around but Plocharczyk stands out for his tender yet pointy-edged portrayal of Arthur, an addict whose guilt at having received a second chance leaves him crumbling steadily away. When the play’s focus shifts to him in the second act, its composition suddenly springs to life. Whereas before it was a play about how beliefs affect opinion, it becomes a play about how belief affects a person. (Alex Huntsberger)