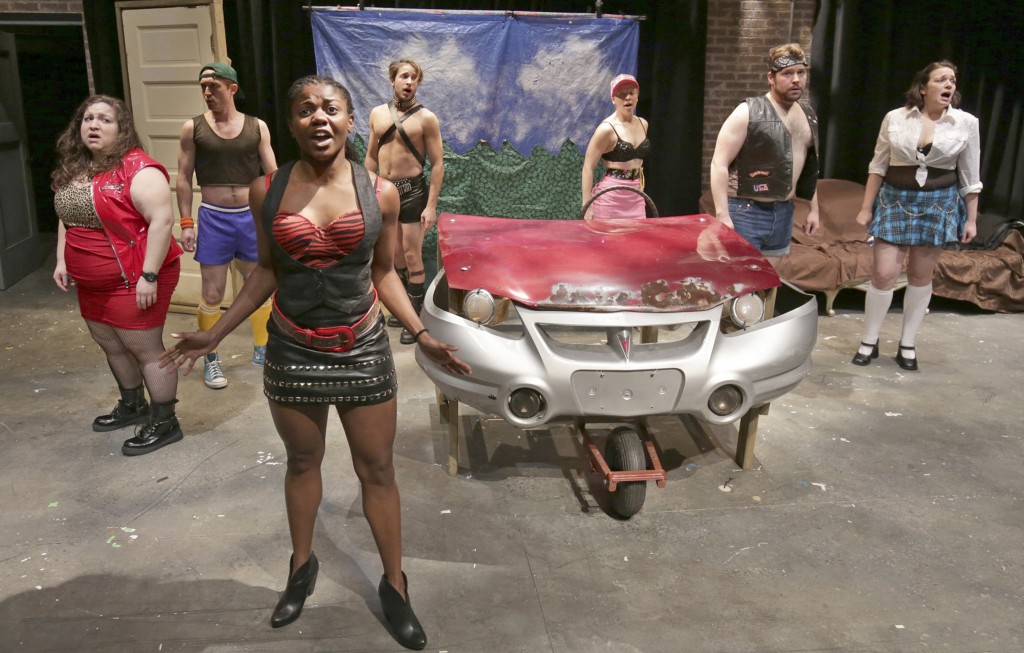 In case you were wondering, yes, the title of this show is referring to THAT Mr. Burns, of “The Simpsons” infamy. But this isn’t a show about him. And it isn’t a show about either the Simpsons or “The Simpsons.” It is a show about us, about people: about our relationships to the stories we tell each other and listen to, about our reasons for telling them and listening to them, and about the echoing game of telephone that is how those stories evolve and change over their time. How playwright Anne Washburn chooses to tell this story of stories is by using the raw material of “The Simpsons.” Because “The Simpsons” is really just like the human condition: it’s universal.

But “Mr Burns: A Post-Electric Play” is also about something else: namely, the apocalypse. The catastrophe itself remains unidentified. All that matters is that society collapsed, the grid went down and nuclear reactors started melting down too. Act One opens with a group of survivors sitting around a campfire, trying to reconstruct the classic “Simpsons” episode “Cape Feare” from memory. It’s a way to pass the long, dangerous nights. Act Two opens seven years later. They are now a traveling theater troupe, rehearsing their half-remembered version of “Cape Feare.” Danger still lurks, but so does the need for distraction. Act Three opens seventy-five years after Act One. Let’s just say that in the intervening decades the “Cape Feare” story has evolved somewhat. Or maybe, given that the story now serves as a nuclear-fallout creation myth, the word “mutated” would be more appropriate.

Under the deliberate yet freewheeling direction of Jeremy Wechsler, Theater Wit’s production of “Mr. Burns: A Post-Electric Play” is, my apologies in advance, simply electrifying. The cast is stellar, managing to rev up from realistic drama to full-blown opera over the course of the play’s three acts. The production design likewise starts with utter simplicity, some trees and effective campfire lighting, and eventually explodes in full, orgiastic spectacle. The play itself is unlike anything else in town, and Wechsler’s production is as good as this town has to offer. (Alex Huntsberger)