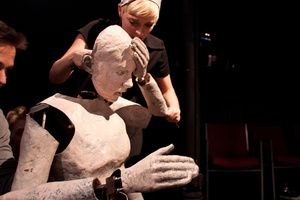 “Nasty, Brutish & Short” is a wonderful title if not a particularly apt one for this DIY evening of storefront puppet theater. A more accurate title might be “Charming, Slightly-Rough-Around-the-Edges and Of Average Length.” Performing at Links Hall as a part of the Chicago International Puppet Theater Festival, the showcase ensures the “Chicago” part of the festival is well-represented, both in personnel and personality.

For Program A, Sea Beast Theatre Company offers three vignettes. They are short, sea-salty nuggets of wit: a boy’s incredibly ill-fated voyage out to sea, a mermaid and a clam both soaking in whimsy and a post-apocalyptic mouse who builds itself a post-apocalyptic robot pal. However, that last show is performed in miniature with live video feed, one that was often hard to follow.

Hearts and Brains’ piece, a very loose adaptation of “Beowulf,” is the most rousing performance of the night. If you’ve ever heard the old joke about “how many fake-blood-stained Barbies does it take to perform a puppet theater adaptation of ‘Beowulf’” then you’ll be familiar with this show’s punchline, which is “so many more than you could ever imagine.” There is also a touching Viking funeral set to the music of Journey, which is definitely canonical. I checked.

VonOrthal’s adaptation of “A White Heron” is the evening’s most subdued, lyrical piece. It combines traditional and shadow puppetry to tell a simple fable beautifully.

Finally, Jessica Simon’s flashy “Ruby and Charlie” employs puppetry, dance and the music of Ray Charles to tell a story that continually morphs before our eyes: it goes from dreamlike fantasy to screwball romance to feminist critique to sultry morality play.

The rough edges mentioned above appear within the shows themselves, but mostly in the transitions which are long and a bit awkward. Still, they are somehow almost winningly so. They may not be elegant but neither is Chicago. It’s a city where people expect to see the strings. (Alex Huntsberger)