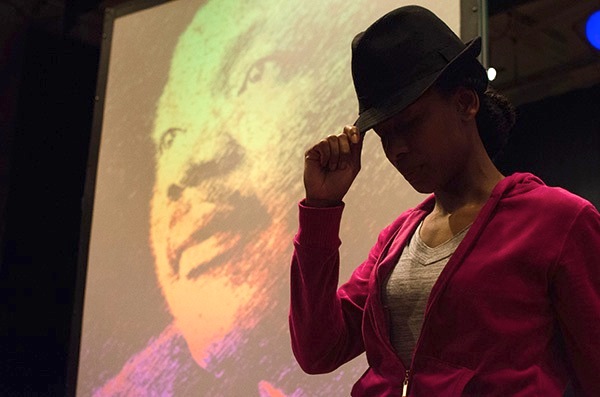 I will never forget the tears I shed reading the story of Demario Bailey, the Chicago teen gunned down three days shy of his sixteenth birthday, because he refused to give up his winter coat. My tears however were not just for Demario, or his twin brother Demacio who was by his side during the whole tragedy, but for the teens who would now spend the rest of their lives in prison. I began to ask myself, how could we go about saving both of them—those who die at the hands of the trigger and those who pull it?

As I watched Writers Theatre “The MLK Project: The Fight For Civil Rights,” presented by Chicago Children’s Theatre, I couldn’t help but think that Alaya’s (Caren Blackmore) journey of self-discovery might be one solution.

In this one woman show, Alaya has difficulty navigating poverty-stricken and crime-ridden Chicago. There is call for peace by a local radio DJ, but it’s hard for her to reconcile it, in a city filled with hate in its many forms. Her only coping mechanism for survival is unfortunately that of many youth—fighting. After almost getting into yet another fight, her teacher challenges her to discover who she is, by writing a paper on Dr. Martin Luther King Jr.

What starts as a project of drudgery becomes much more than what Alaya expected when she learns she can fight, just in a different way. From the script, to Jimmy McDermott’s direction, to Blackmore’s superb performance as Alaya and the litany of other Chicago monuments of history we meet (two of which were in the audience when I attended), this is an absolutely phenomenal production.

Although the play has been running for nine years, playwright Yolanda Androzzo has updated her script to include the heartbeat of the current movements such as those for Trayvon Martin and the Black Lives Matter campaign. Hearing the youth speak with such intelligence, passion and curiosity at the post-show discussion, reminds us of the true power of theater not just to entertain, but propel and challenge us to live our best lives. We need more of this. (Loy Webb)