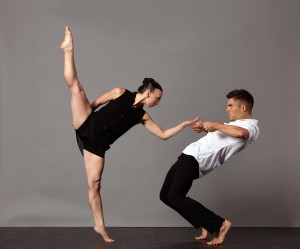 The Auditorium Theatre’s “Made in Chicago” series—part of the programing for the 125th anniversary season—has opened the historic, gold-rimmed stage to a couple hometown companies for the first time; to Thodos Dance last fall and, this month, to Giordano Dance Chicago, a company that has been performing high-octane jazz dance for almost half as long as the Adler and Sullivan treasure has been standing. The one-night program includes several pieces from Giordano’s fall program—resident choreographer Autumn Eckman’s sexy, finely honed duet “Alloy,” Roni Koresh’s hard driving, militant “Exit4,” and Ray Leeper’s big Broadway-esque show stopper “Feelin’ Good Sweet”—along with a premiere of a new work by Ray Mercer, former dancer with Deeply Rooted and winner of the Joffrey’s Choreographers of Color Award. Mercer’s full company work, entitled “Shirt Off My Back,” explores how we sometimes give too much in our relationships, be they intimate, platonic or filial.

Mercer set the piece on the Alvin Ailey school in New York—where he now lives and works, but had already promised it to Nan Giordano for the world premiere. “I’d never worked with Giordano and they were always on my list,” Mercer says. “They’re a long-standing staple in the Chicago community. What I didn’t expect was how hard the dancers would work; we finished it in three days. The dancers, the administrative staff—people say it all the time, but they’re like a family,” he told me. Any visitor to a Giordano rehearsal can attest that this isn’t an exaggeration. Each and every dancer stops what they’re doing to greet you with a hug. “It’s refreshing, isn’t it?” Mercer says. “They not only take care of the work, they also take care of one another and it ultimately reflects what they do on stage.” (Sharon Hoyer)