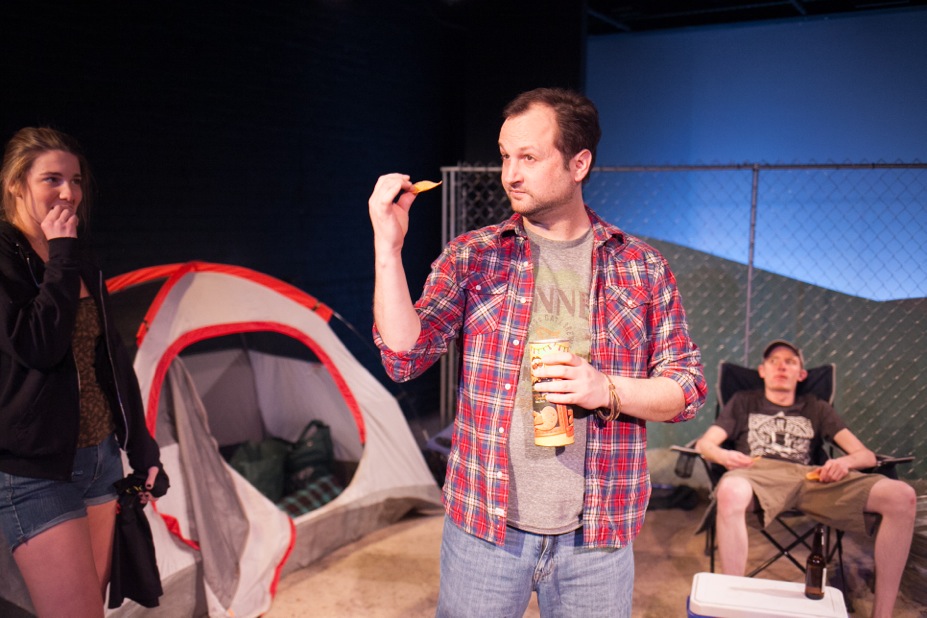 If you have ever attended a small party at which everyone else got stoned and drunk while you remained completely sober, then you know what experiencing Signal Ensemble Theatre’s “Red Bud” is like. I say experiencing, rather than watching, because the hyper-realism that permeates this production affects, alienates and engrosses the audience all at once.

Director Brant Russell’s cast takes this slice-of-life script by Brett Neveu and embodies it fully. The pacing is slow, and then gets slower. Conversation throughout the play has its ups and downs, and the lulls often tell you more about the characters than the words said between them. In one segment of the play, the audience looks on as three guys set up a two-man dome tent. No words are spoken. All the little things that go wrong when setting up a tent do so. And the moment is beautiful.

By the end, pacing does pick up, largely due to a drinking game that makes up a significant part of the second half of the show. Four forty-year-old guys, with one of their wives, and the nineteen-year-old girlfriend of another, drinking copious amounts of alcohol at twilight around a campfire; what could go wrong? Jana (the nineteen-year-old, played by Samantha Beach) starts asking questions that bring out the darker sides of the friends around the fire. Tensions rise very abruptly, and suddenly fights erupt, marriages fall apart, and one friend (played by Joe McCauley) urinates on the unconscious, beaten body of another.

The low-key party atmosphere dies as the friends watch their time-honored tradition unravel. What starts out as a relaxing experience leaves us exhausted and spent. (Christopher Kidder-Mostrom)