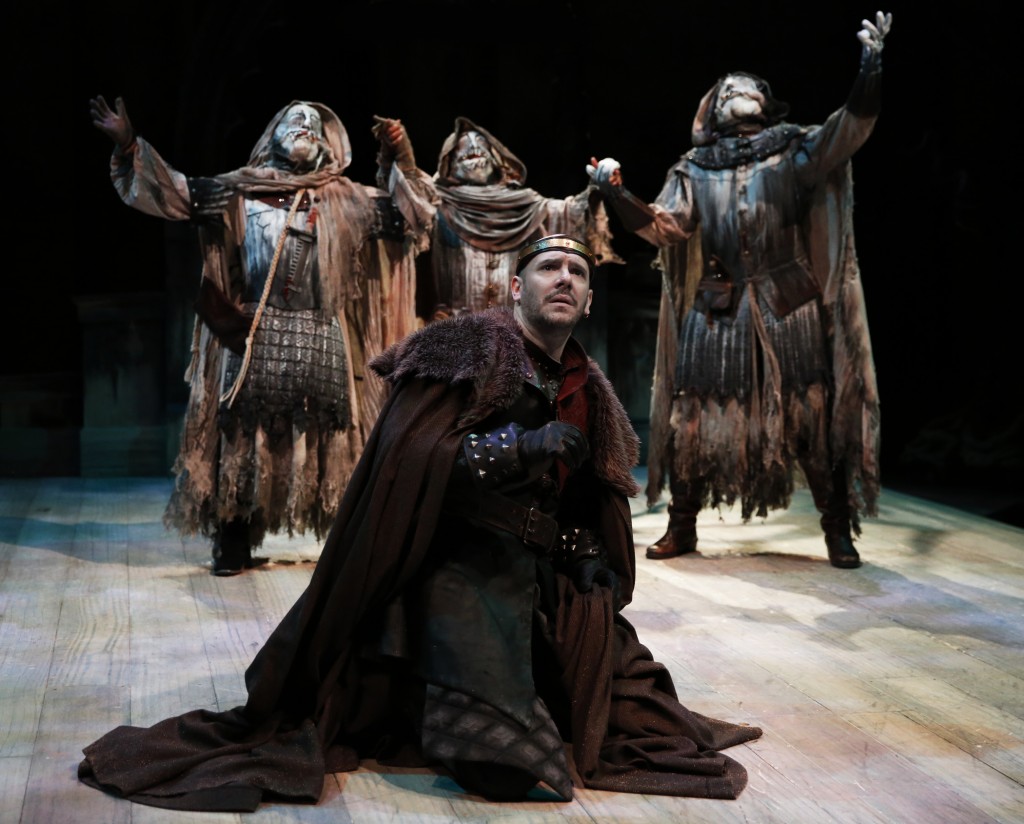 Covetousness, fueled by ambition and greed, drives the plot of Shakespeare’s tragedy “Macbeth,” where Scotland’s political system is upended twice, with murder the tool to power, and madness in its wake. Shakespeare’s shortest tragedy, with a potential run-time as long as three hours not counting intervals, has been trimmed to an unstoppable seventy-five-minute banquet of blood by director Kirsten Kelly, and if the speed of this production requires Macbeth to race to madness so quickly that we lose some of his everyman-quality, and if Lady Macbeth is perfectly bonkers from her first entrance, the sheer swiftness of Kelly’s roller-coaster ride is so gripping that we’re happy to wait for a more psychological production next time, when the design isn’t geared for presentation to younger audiences. Princes and henchmen and murderers race up and down the aisles of the theater, swords drawn and battle-cries piercing. Whispered plotting and heralded assassination land in the audience’s lap and violent moments are staged to be as age-friendly as possible.

Chris Genebach’s Macbeth is simply one of the best portrayals I have ever seen, every intention crystal-clear, each emotion, however unhinged, gut-driven. Lanise Antoine Shelley is a chilling Lady Macbeth; her hand-scrubbing scene will burn in your memory. Nicholas Harazin graduates from some-time ingénue with his leading-man MacDuff, and Steven Lee Johnson’s Fleance springs into fully-fleshed kingship with few scenes and fewer lines. Timothy Edward Kane’s verse-coaching causes every line to trip from the tongues, countenancing the readiest understanding of Shakespeare’s sovereignty.

Before the show-proper, one of the company’s actors introduces the world of the production, admonishes the audience to let the text wash over them until their ears catch up with the meter and the rhymes and the vocabulary, and to keep themselves and their parents out of the aisles and dispatch their beeping, glowing, constant companions. A talk-back follows the performance, and the players greet the departing guests in the lobby. (Aaron Hunt)