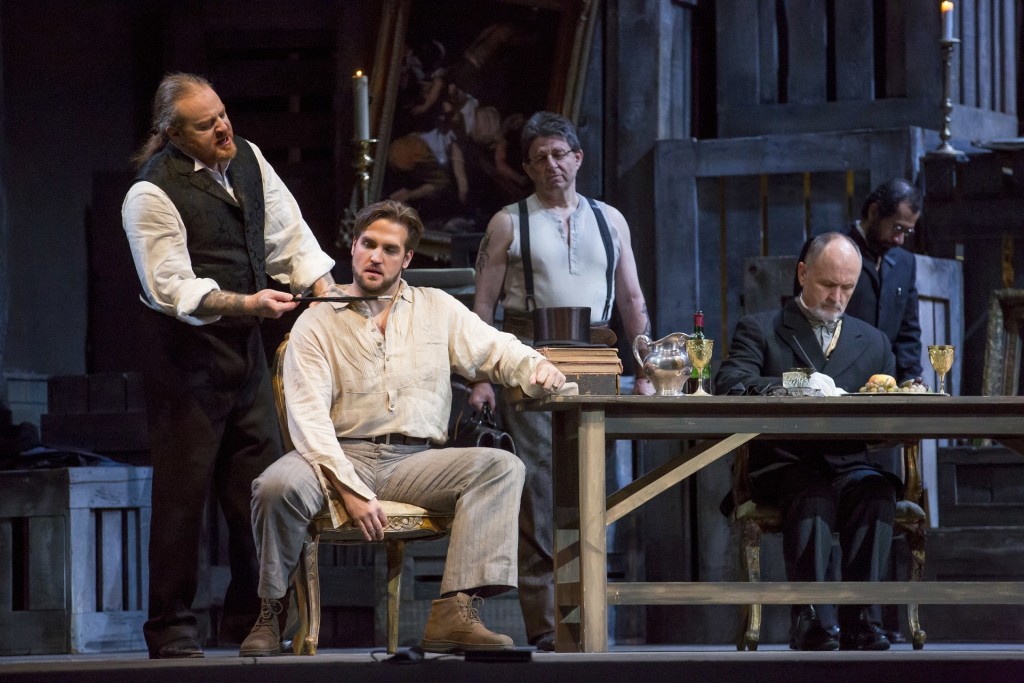 Puccini’s score for “Tosca” is chock-full of thrilling moments. The crashing opening chords introduce us to Angelotti, whose escape from prison drives the plot. We don’t wait long for Cavaradossi’s throbbing ode to his love, “Recondita armonia.” Tosca’s calls of “Mario! Mario!” are heard from offstage, and by then we are completely beguiled, awaiting the “Te Deum” that ends Act I, as bone-shaking and brain-numbing as any rock concert.

In Lyric’s production, the less familiar music of Act I is enlightened by soprano Tatiana Serjan’s Tosca and tenor Brian Jagde’s Cavaradossi. They chase each other up and down scaffolding, play-fighting like children, and then suddenly confessing love that cannot be moved. Both are attractive, consummate actors, and bring a freshness to their portrayals.

Serjan’s soprano seemed more lyrical than might be expected for Tosca. She has enjoyed repeated success in this role, and ventures into the dramatic soprano repertoire. Her “Vissi d’arte” is a thing of loveliness and pain, beautifully spun. Perhaps I would have been able to appreciate this voice more fully if conductor Dmitri Jurowski, making his Lyric debut, had not indulged himself with our fine orchestra to the point that I frequently could not hear her.

Not so with Jagde. His voice’s chiaroscuro (the balance of lightness and darkness) and a razor-sharp focus awarded his Lyric debut with thunderous applause; Jagde seems the new Richard Tucker. It did concern me that Jagde’s Act III aria, “E lucevan le stelle,” was delivered without the point and ease he enjoyed at the top of the opera, perhaps a choice, and not fatigue. I hope he will continue to explore lyric repertoire, and not be seduced into spinto roles before it is time.

Evgeny Nikitin (Scarpia) suffered from a vocal dryness, and an occasional raising of the larynx in the upper-middle voice; his “Va, Tosca!” was mostly inaudible. The stiff characterization was never sharpened by the playing of the opposite; moments of cat-like pounce and physical lyricism would have created a stronger impression.

While the production suffers on several levels, Jagde alone is reason to attend. (Aaron Hunt)