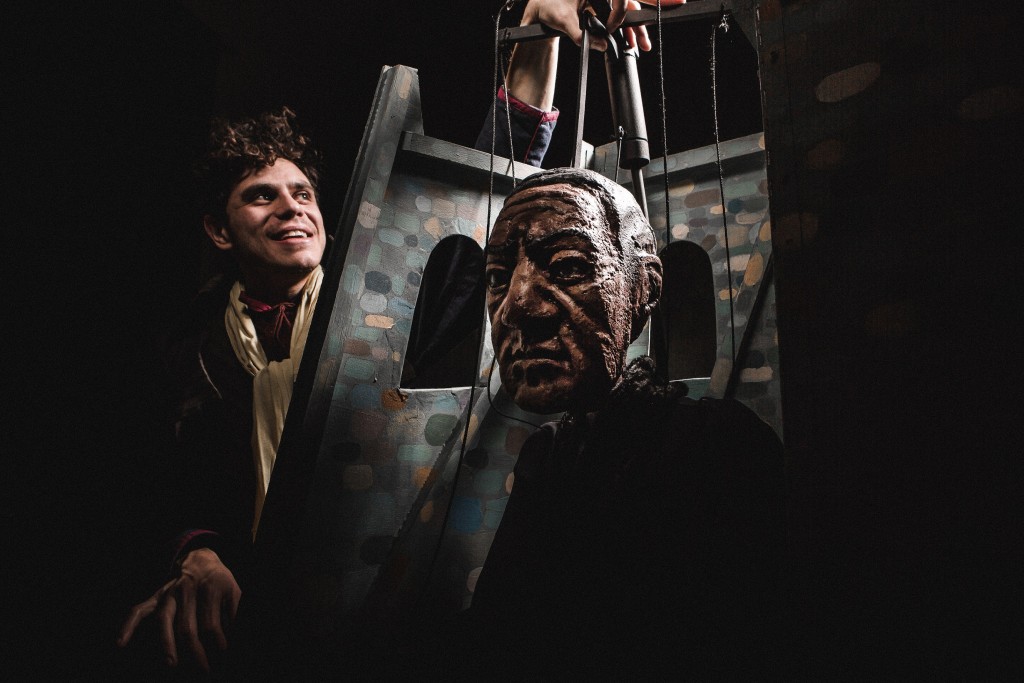 Winter can be rough for parents and their children. Snow and cold and sniffles lock them inside for weeks or months, with only intermittent sledding sessions or the occasional pizza party to bridge the gaps. Even in the Netflix age, most of the entertainment options are a drag; over-produced, high-fructose-infused CGI sequels and spinoffs abound. Just as the holidays have faded and the dog days of winter have descended, Chicago Children’s Theatre’s revival of the 2008 hit “The Selfish Giant” is a welcome preview of the thaw ahead.

Co-creators Blair Thomas and Michael Smith have returned their papier-mache and carved wooden actors to the stage and the result is a ripe, sun-kissed peach blossom of a production. Thomas, whose inaugural Chicago International Puppet Theater Festival wrapped during “Giant”’s opening weekend, has handed the puppeteering duties to the youthful and magnetic Samuel Deutsch. Joining him onstage are lyricist and performer Smith and a cadre of puppet actors in all shapes and sizes, from an eight-foot-tall giant to delicate marionettes of the village children.

The story, freely adapted from Oscar Wilde’s source, is appropriately simple. A giant returns to his village after a long absence and after walling off his garden to the local children, endures a seemingly endless winter. As with all successful children’s-oriented productions, the triumph is all in the telling.

Presenting himself with hushed, fog-like omnipresence, Deutsch moves effortlessly between silent narrator and translucent operator, precisely directing attention to the actors and clever scenery before fading into anonymity as the puppets surge to prominence. Early in the show, after a sparklingly sweet first song by Smith, Deutsch exits his giant’s costume with brilliant sophistication before lurching to mid-stage to begin the more nuanced marionette performances. This transfer of energy, from inhabiting the central character to becoming one with the scenery, could be jarring but Deutsch’s nimble foregrounding of this transition gives it a comedic bent and in some ways helps the younger audience begin to intellectualize the elastic divide between puppet and puppeteer.

As nuanced and delightful as Deutsch’s performance is, it may be Michael Smith’s lovely and thoughtfully brilliant songs, developed specifically with Thomas for the play, that return many for a second or third performance. The slightly creaky folk vernacular Smith employs is tonally ideal; quietly advancing the plot, identifiable to the children but capable of rendering fond reminiscences in their parents, these are not the leaden, sentimental cry-cues of some contemporary kid songcraft (Randy Newman, I’m looking at you). I was happily reminded of “Percy”-era Kinks, or maybe a more optimistic Stephin Merritt. In fact, as articles unto themselves, Smith’s songs are of a caliber that certainly warrants a table of CDs for sale perched next to the copies of Wilde’s source material.

The perfectly scruffy story and songs are reflected in the tonally rich and melancholic art direction. Deutsch is all scuffed-boots and sagging hems, comfortably at home among the imperfectly symmetrical puppets, crackly giant’s head and hand-me-down (and down again) trunks. When these trunks opened, one-by-one, to reveal scenery and actors masterfully constructed as if created in the world’s most advanced toddler crafting weekend, I felt the palpable sense of discovery in the room. There is quiet beauty to this lo-fi approach, and nothing could be more appropriate for the story, songs and performance—just a little “Thunderbirds Are Go!” and a little Michel Gondry, all developed through (Redmoon co-founder) Thomas’ brilliant clockwork mind.

I couldn’t help thinking this entire performance served as a sort of affirmation of the twee DIY manifestoes circulating when many of these parents were pondering their master’s degrees. Handmade and engaging, decidedly uplifting, “The Selfish Giant” is a gentle stroll through a spring garden made manifest by puppets and songs.  That said, at the end of the night, I didn’t feel like I was exposing my son to a sliver of my emotional universe, I felt like he was exposing me to his. (Jonathan Richardson)